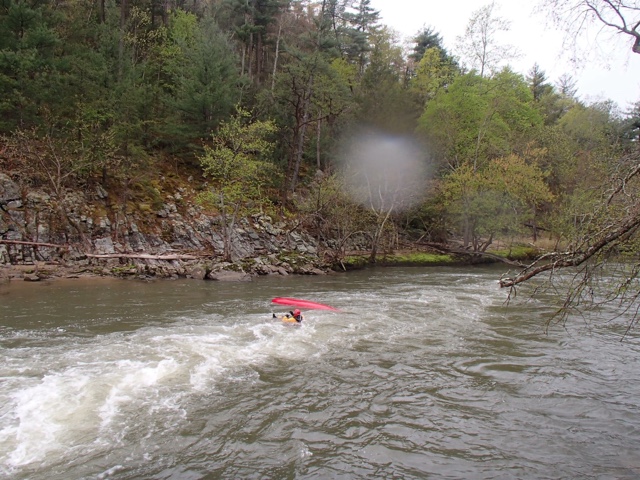 I sat on the edge of the chocolate milk colored river as everyone geared up for what would be some big water fun. Six of us were heading down the French Broad River, from Barnard to Hot Springs, NC. This place is a great training ground for whitewater. With its natural flow, you get to experience different levels at different times, year-round. During this particular warm spring run the mountains had received several days of downpour which pumped everything up and kept it up.
Watching 10,000 cubic feet of water flow past you every second is an amazing sight. Jumping on board and playing with it is exhilarating to say the least.  I had been on this level once before. It was a cold fall trip and everything had gone well, so I wasn’t going to be surprised by too much, I thought as I slipped into the swift current. 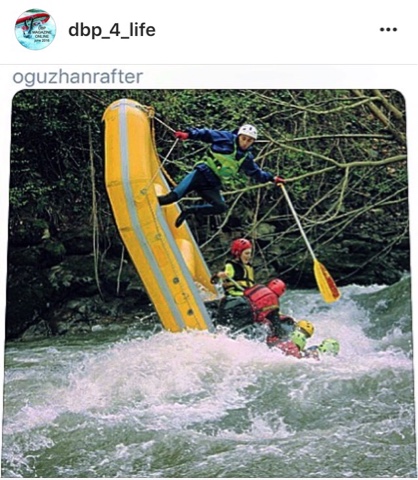 Before long we had gone past the first mile. The entire group had been doing well. At this stage the river turns into large wave trains and a few large standing waves. There are some big holes to avoid as well but they are much further down. I don’t remember exactly where it was but I know it was after Jump Rock and before Sandy Bottom. There are a series of 2’s and solid 3’s that are extremely busy at this point. A few of us began to run the same line. I was third, and at this point it appeared we had chosen the best route. My boat, an old 80’s t-slalom, was gaining on the other two as we approached a big wave.
Coming in a little too close quickly became closer as the lead boat stalled on the top of the wave and began to surf back. I knew I would punch the wave in my boat but wasn’t sure if I could slip between the two boats ahead of me. I was guessing they would be competing for space and a way off this wave by the time I needed to get by. Then like a rocket, the second boater went through and over with little struggle, popping over the wave and disappearing into the rest of what was ahead. I dropped into the trough and just as I suspected, my boat drove in and began to cut into the wave, then dove into the top as I began to turn towards what I could now see was a big wave from the left. I felt and heard the thud of the plastic from the boat behind me as our hulls collided. It quickly turned me back to the right as the next wave flipped me over. I began to set up to roll and feel the wave as I readied myself. I thought I felt very relaxed upside down for all that was going on around me. Just as I began to snap my boat back up I felt the drop of the wave and a pounding on my back and head. It knocked the breath out of me as well as causing my left hand to release my paddle. I couldn’t get it back and I began to panic.
I kicked out of my boat and resurfaced into what I could best describe as turbulent chaos. I began the fight to the bank. River right was my best view and so I went for it, and went for it, and went for it. I wasn’t able to break into any of the eddies. I couldn’t get out of the current. I finally managed to grab a rock and climb on after what felt like a mile of being beaten by the river. I remember feeling for a moment that I really wasn’t sure if I would be able to get back to shore. 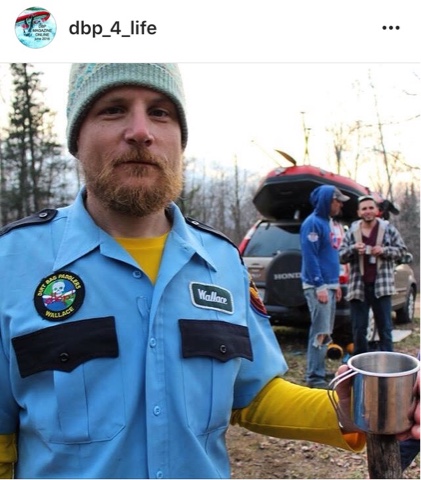 I had tossed my paddle on to the rocks during one of my eddy attempts. It was a bit of a trek to retrieve it. While I was hiking back to get it, I began to reflect on what had just happened and the lessons Wallace had for me that day. I had been served up, beat down, tossed over under and sideways, and we still had five more miles to go. I have never struggled that hard or work that much in a swim. Many things I took home that day. Along with some new lessons I also gained a deeper respect for the river and the Wallace! We are all in between swims!
F. Wes Breitenbach
Associate Editor, DBP MAGAZINE ONLINE
PHOTOS- All scooped from our Instagram feed, @DBP_4_LIFE. Check it out!
1st Photo- Wes knows Wallace intimately…
2nd Photo- DBP Admin Oghuzan Sahin getting Wallaced in Turkey.
3rd Photo- Wes sporting his Wallace uni at Pesh Fest in Wisconsin.

2 replies on “WALLACE NEEDS NO INVITATION ~ On The French Broad. by F Wes Brietenbach, photos from @DBP_4_LIFE on Instagram”

That was a boat I paddled a long time ago!
Sounds like the paddler behind you was following too closely if they couldn't avoid you – in a hole situation, you would typically both end up in it in a colision.

Thank you very much for the above information. It will be very helpful to me….!