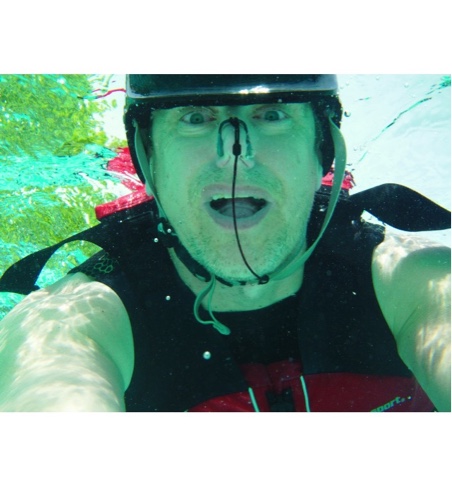 Bogart: How’d you like it?
Hepburn: Like it?
Bogart: Whitewater rapids!
Hepburn: I never dreamed. . .
Bogart: I don’t blame you for being scared — not one bit. Nobody with good sense ain’t scare of whitewater.
Hepburn: I never dreamed that any mere physical experience could be so stimulating.
-The African Queen
Erik Allen looked at me sternly. Things needed to happen fast and now. I was soaking wet standing in swirling ankle-deep freezing water after being tossed about in the rapids of the North Fork of the American like a bobbing float toy. I had gathered enough strength to swim to the rocky shore and found some footing. The boat I had used was somewhere downstream, consequently leaving me marooned on the wrong side of the river.  It was Groundhog’s Day.
“You’re going to have to swim across to the other side of the river,” Erik said over the sound of the rushing water. “There is no trail here. We’re on the wrong side dude!” 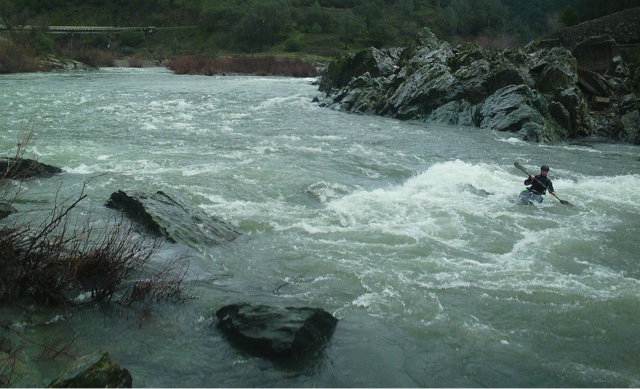 Moments before,  I had suffered a classic boater’s beat down nightmare. Upstream, I had rolled and was forced to swim. I could still see the emerald wave moving in slow motion. It was curling, big, and looked ten feet tall. I was hypnotized by its size and power. I lost focus and froze, committing the cardinal sin of whitewater kayaking.  I had stopped paddling, just hoping to ride it out. 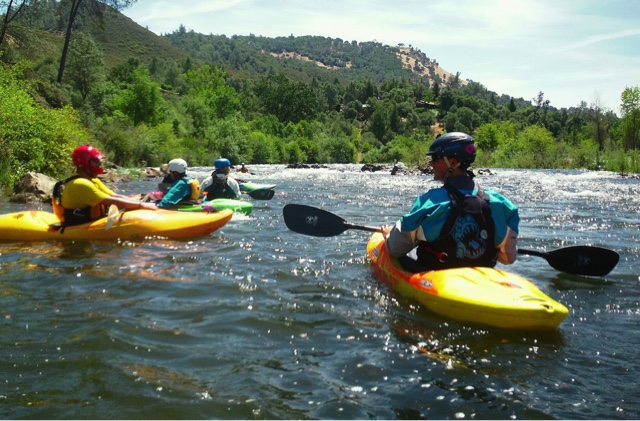 “Fearful or tentative paddling is often a self-fulfilling prophecy, ” said Team Pyranha’s Pete DeLosa. “When we are afraid of what might happen when focused on that thing and thereby cause it to happen. It’s better to paddle aggressively and stay focused on the desired outcome. This is of course easier said than done a lot of the time. But, when you’re tense the boat isn’t able to rock with the water under you. You and your boat can’t move independent of each other and that’s when you get knocked over.”
There is a saying on the river that every paddler, even the good ones, are in between swims. According to the Whitewater Rescue Institutes’s Mike Johnston, “When you fall in whitewater, it’s common to be held underwater for a few seconds. Time seems to slow down. It’s sort of like the dog years ratio, one actual second of submersion seems like about seven seconds. When you need to breath and can’t, three seconds can seem like twenty. This isn’t a long time at your desk, but can feel like forever at the bottom of a rapid. Don’t panic.”
When I rolled and broke away from my kayak,  I was on my back with my feet downstream.  I had one hand locked to my paddle and the other latched to the floundering boat as I bobbed along in the Class III torrent. The turbulent and aerated waves frothed and bounded, dishing out its fury on my body and boat. Keeping my feet pointed downstream, I used my body to angle through the current, maneuvering right or left, with the boat in front of me. I kept my body long and streamlined to maneuver smoothly and efficiently. The goal now was not to get hurt.
“The world goes dark, ” writer and adventurer Joe Kane said in his book Running the Amazon, a firsthand account of the only expedition ever to travel the entire 4,200-mile Amazon River from its source in Peru to the Atlantic Ocean, as he describes his swim through the abyss of churning rapids. “The river— the word hardly does justice to the churning mess enveloping you— the river tumbles you like so much laundry. It punches the air from your lungs. You’re helpless. Swimming is a joke. You know for a fact that you are drowning. For the first time you understand the strength of the insouciant monster that has swallowed you. Maybe you travel a hundred feet before you surface (the current is moving that fast). And another hundred feet—just short of a truly fearsome plunge, one that will surely kill you— before you see the rescue lines. You’re hauled to shore wearing a sheepish grin and a look in your eye that is equal parts confusion, respect, and raw fear.”
Erik was quick to my rescue after I had bounced like a floating beach ball through the big waves. “Let go of the boat and grab on,” he yelled out. In a moment of hesitation I clung to my boat even tighter, rolling into the fury of the rapid. People forget to emphasize that on single boat trips; the backup plan is always self rescue. It’s good risk management to apply the buddy system to every river trip. 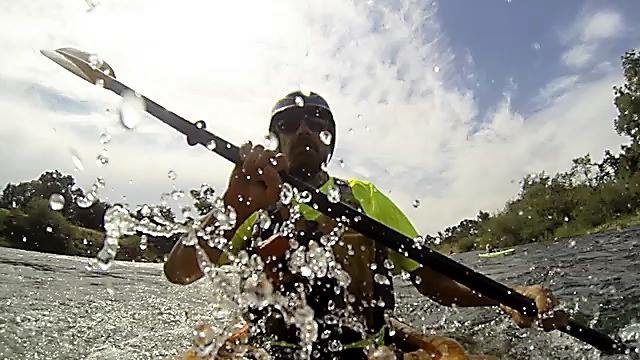 Erik Allen has what they call the water gene. A former Navy medic, he has taken up adventure guiding as his true passion. He is as at home on the water as he is on land. He often leads groups snowshoeing, camping, and hiking as well as kayaking. He is used to taking care of others while out in the wild.
“Let go of the boat and grab on,” he yelled again. I released my boat and watched it from the corners of eyes drift away from me. “Give me your paddle!” I reached my paddle out from the waves. Erik snatched it from my hand. Then I swam with all my might to reach the back of his play boat. Stroke one, stroke two, and one more. The freezing water was leaving me breathless as his boat rushed ahead just out of reach. Another lunge forward and finally I caught his stern handle as the waves punched at me again and again. As I caught breaths of air between the trough of waves, I hung on tight to his boat as we were poured into a huge rapid.
Everyone should know about the potential for entrapment in moving water. I tried minimizing the risk of foot entrapment in moving water by keeping my feet up while hanging on the back of Eric’s boat. My feet could act like hooks, possibly to get caught between cracks in rocks or any type of nook or cranny on the bottom of the river. However, in this improvised swimming position with my hands forward clutching Eric’s kayak, I banged my knee and shins against the rocks. You would think after after soaking for thousands of years they would be a little softer, but as we all know, rocks are very hard.
“Now swim, swim!’ Erik shouted. I had turned from being a defensive swimmer to an aggressive one. Aggressive swimming is used to get from point A to point B as fast as possible. I let his boat go, and with the American crawl kicked it into high gear,  setting a ferry angle to cross fast moving current. Ferrying swimmers use the same techniques used when boating. Keep your head up so you can see where you are going, set a ferry angle, and swim hard. Faster water uses a smaller angle, and with very slow water I could simply swim directly across at a 90 ° angle. As former high school swimmer, I knew how to push my arms arms forward. Before long I found some shallow rushing water.
After that long swim, I was very tempted to stand up when I got close to the rocky and rough shore. The water was still moving very quickly and was deeper than my knees. Standing up too early I knew I could possibly get knocked down. I took my time to stand when I found some decent footing. The only problem was it was on the wrong side of the river, once again.
“You do not know how long you are in a river when the current moves swiftly. It seems a long time and it may be very short,” Ernest Hemingway wrote in A Farewell to Arm. Joe Kane seems to follow it when he wrote, “That is River Lesson Number One. Everyone suffers it. And every time you get the least bit cocky, every time you think you have finally figured out what the river is all about, you suffer it all over again.”
I pretty much lost everything but my paddle. For boaters on the South Fork of the American River, Current Adventures Kayak School and Trips’ Dan Crandall offers these tips, “Any gear lost to the river will more than likely end up in the reservoirs below, but in much worse condition that when it left you. All gear such as throw ropes and dry bags should be tied in and your name and phone number on each piece of your gear are always sound pieces of advice and will help tremendously in your gear’s return.” My gear however was lost for good.
“Catch your breath,” Erik said. I sensed the the stress in his voice. “We will go when you’re ready,” he said while peering along the shoreline for the missing boat. With every moment it was getting further and further downstream.
No man with any sense is going to willingly jump back into a freezing a river again.
“Are you ready?” he asked.
Dripping, shaking and aching in pain, all I could say was “Let’s go.”
I dove into the river, clinging tightly to the play boat’s back handle. I didn’t have time for fear and shook off the cold of the water. My goal was to push through or in my case be dragged over to the other side. Into another wave we went. It seemed to crash around us. I took gulps of air between plunges under water, losing track of time and feeling as the water and rocks beat down on my body. Erik delivered me halfway and once again I had to swim the rest.
A lonely woman hiker watched the whole thing from the trail. As I climbed out of the river and limped up the side of the shore, she greeted me, looking stunned.
“Should I call 911?” she asked.
Still out breath, I shook my head no.
“Are you alright?”
I nodded and said breathlessly, “It’s just another day on the North Fork of the American River.”
“I almost died whitewater kayaking six years ago,” she said with sympathy.
I laughed and said to her, “It almost killed me today.”
Then I took off down the trail in search of Erik. 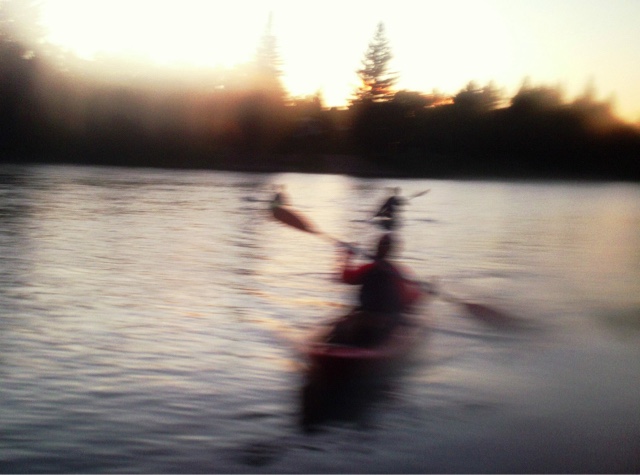