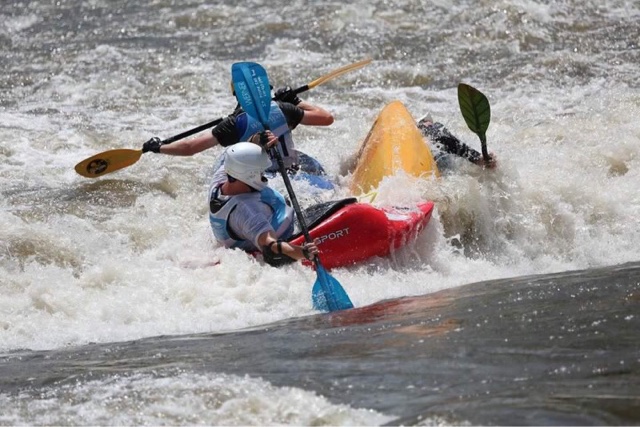 Chuck Town was the place to be if you were dirtbaggin’ in Iowa last month. Paddlers trickled into Charles City, IA throughout the week leading up to the 5th annual Charles City Challenge held Saturday, June 18th.

2016 Charles City Challenge
Friday evening kicked off the event with a film fest at the local R Campground showcasing Substantial Media House kayaking films. The film showing was hosted by Prairie Rapids Paddlers and supported by No Coast SUP and Dagger Kayaks. A dozen paddlers, already river whipped from earlier in the day, showed up at dusk for 90 minutes of waterfall and gnarly rapid running entertainment. It was a great way to cap off a day at the whitewater park and stoke the fun for the Charles City Challenge beginning at 10am Saturday. 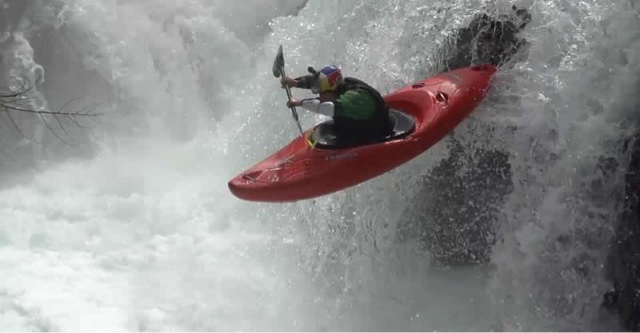 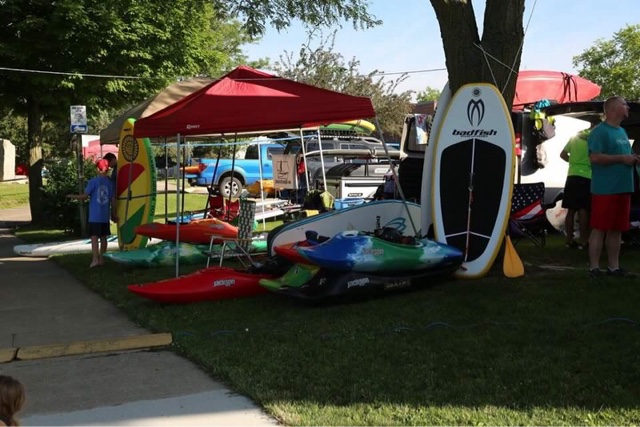 Vendors set up for the action
The event started off quickly in the morning, with several people registering the day-of for events, and paddlers getting in some early paddling practice. Boater X races began at 10am, pitting racers head to head as they battled each other downriver and around set gates in both long and short boat classes. 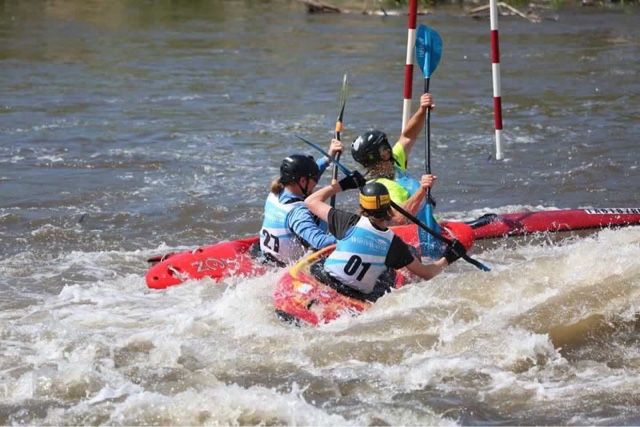 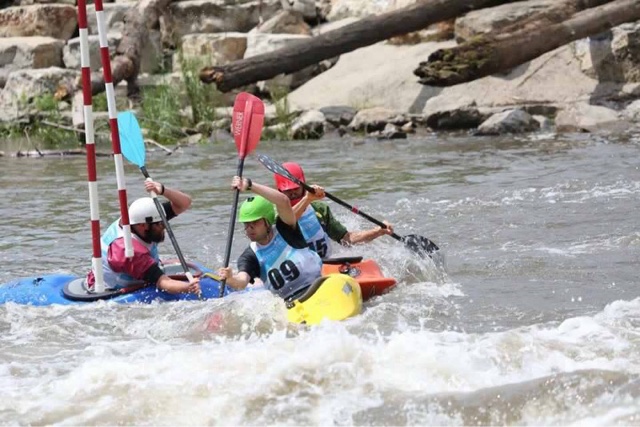 (photo – 5 Boater x playboat) Caption: Boater X short boat race
Next up was King of the Wave where competitors simultaneously surfed the Exit Exam feature until only one person was left surfing, and that was Rick Rassier. 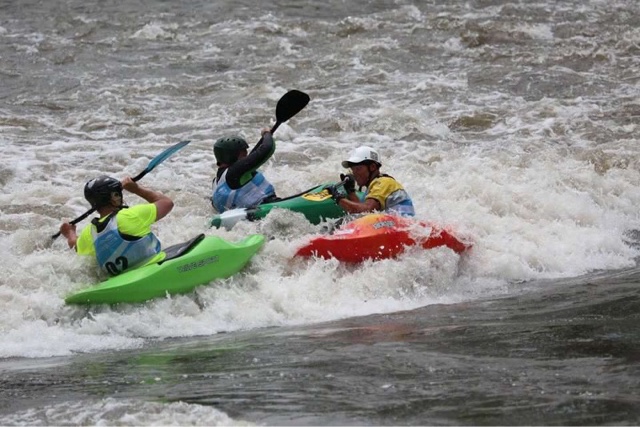 Caption: King of the Wave
New this year was a SUP River Surfing Clinic, taught by myself and Boardworks Ambassador Ty Graham. Assisting us with the clinic was NoCoast SUP owner Katie Gilbert, NoCoast Team Rider Bryce Gilbert, and several paddlers helping with safety. 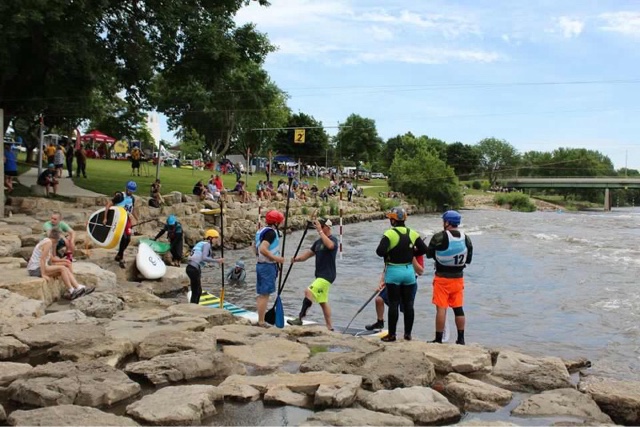 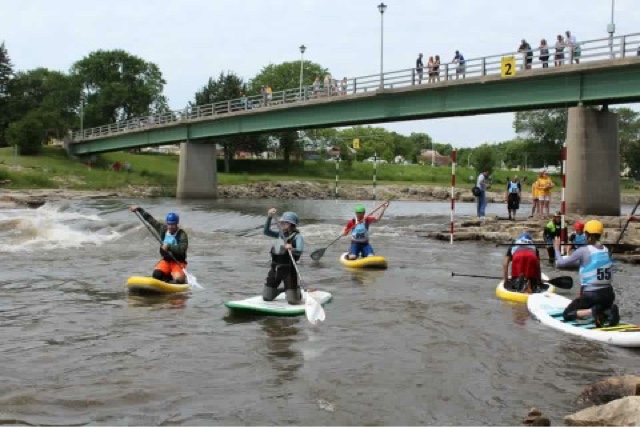 Katie Gilbert demonstrating the kneeling paddle position
We had five students total, and three of them were able to get onto the Double D Wave utilizing the kneeling method. One of the three students was able to stand up and surf several times on the wave. Big thanks to all who allowed us to use their Badfish SUP IRS (Inflatable River Surfer) boards, quick releases, and paddles for the clinic. We had the best equipment for the students and the crowd seemed to love the surfing and the wins just as much as the Wallaces! Overall, it was a successful river surfing clinic! 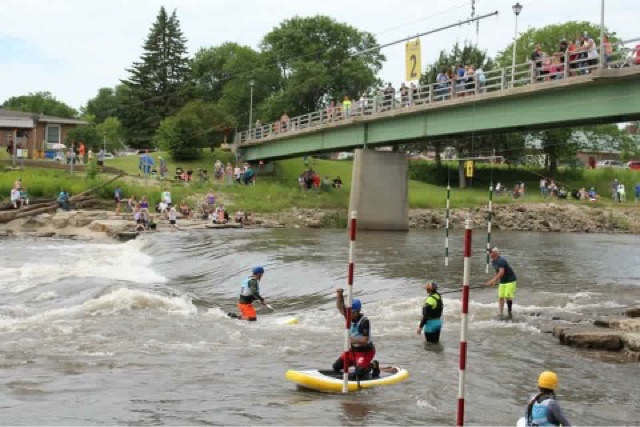 Ty and myself directing and cheering a student on the wave
The cardboard boat race started at high noon, featuring numerous creative and mostly functional floating craft made of cardboard. The objective was to run the whitewater course and the result seemed to be about a 50-50 success rate. It’s always a crowd pleaser to see cardboard boat carnage! 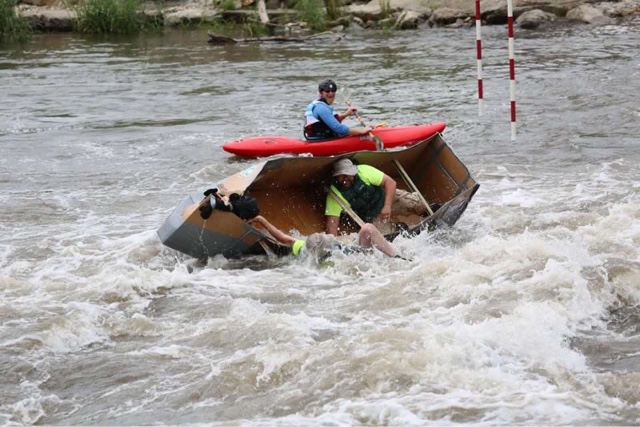 Cardboard boat race carnage
The afternoon events started with the Kayak Rodeo, which attracted several competitors both local and from around the country. A few names I can recall hearing the announcer introduce were Stephen Wright, Rick Rassier, Marty Colbert, {DBP Admin} Sam Schank, Jeremy Heiman, David Childers and many more. 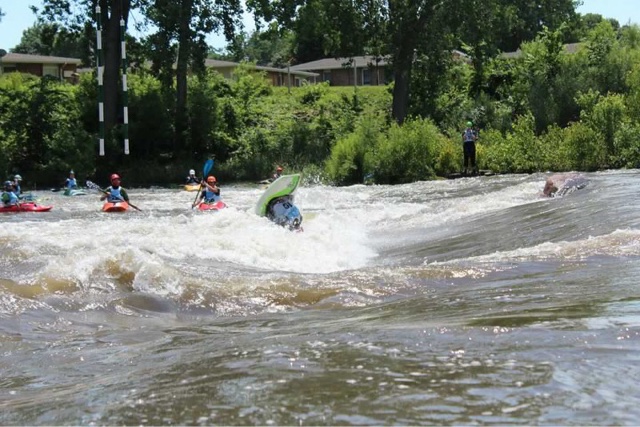 Marty Colbert
Each took their two minute ride on the larger rodeo hole at the whitewater park, performing as many tricks as they could before their time was up. Tricks seen thrown were Flatspins, Cartwheels, Loops, McNastys, Blunts, Back Loops, Lunar Orbits, and Airscrews and likely a few more I couldn’t name. The Top Three were Steven Wright – 1st, Sam Podzimek – 2nd, and David Childers – 3rd. 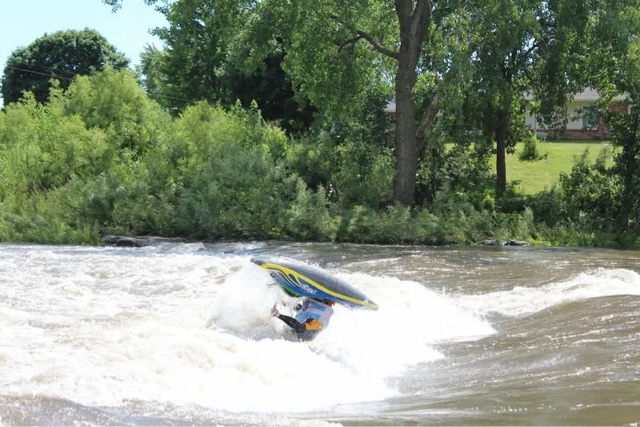 Stephen Wright
Next up were the youth events. It was evident from the grins on their faces that the kiddos enjoyed the downriver kayak race. Fellow paddling peers followed the groms downriver, providing safety in the event of a Wallace. Klayten Perreault, age 11, was the single youth to take on the Double D wave in the Youth Best Surf. He was not quite successful at surfing the wave, but he appeared to have a blast even with swimming out of his tiny Jackson Fun 1 kayak three times. 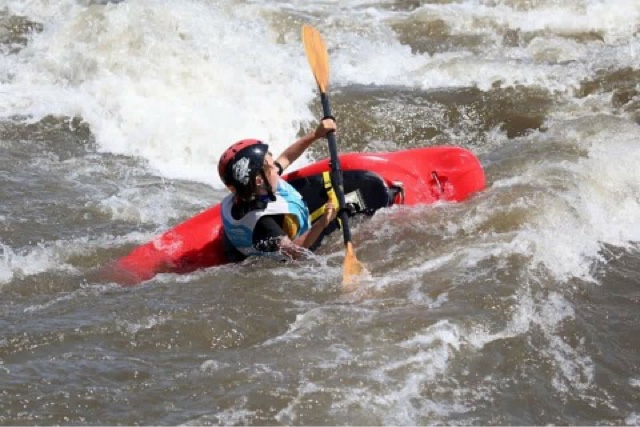 (photo – 14 Youth Best Surf) Caption: Klayten Perreault trying his luck surfing Double D Wave
The SUP Surf Comp took place on the Double D Wave. The men’s division started first with novice and open classes. Each competitor vied for a successful ride on the wave, with only two chances to try. Carves, ollies, and even some headstands got thrown in! 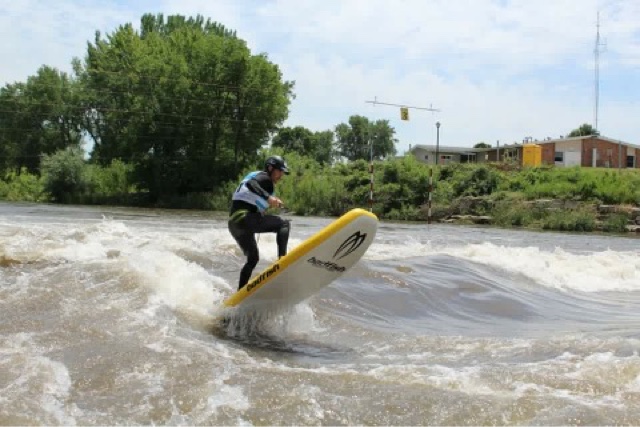 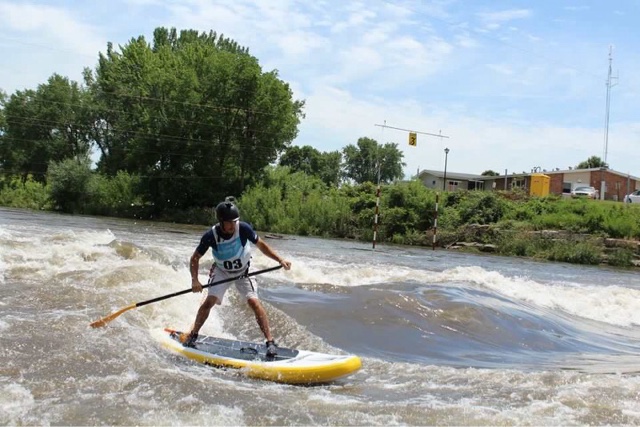 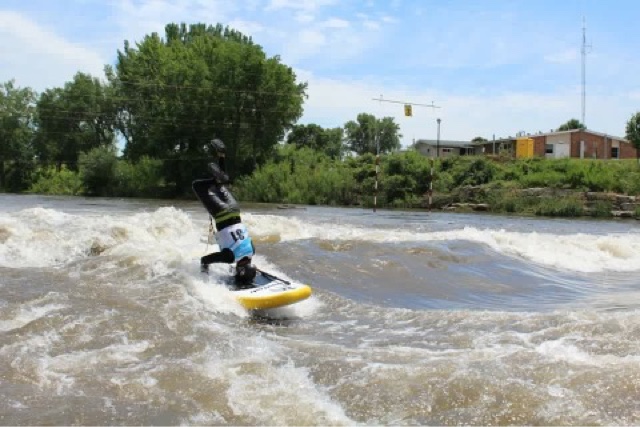 Shannon Thomas getting a head stand on the wave 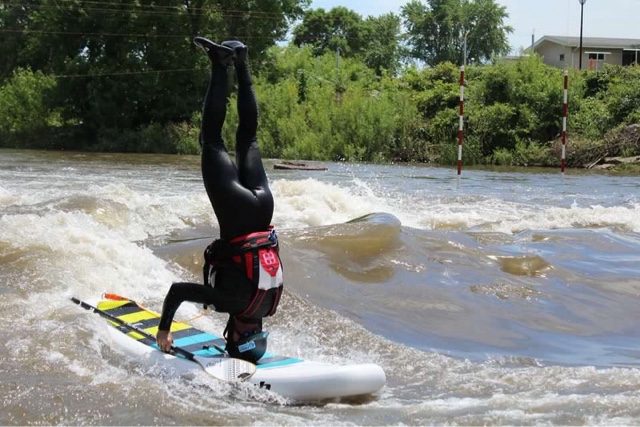 Bryce Gilbert in full headstand on the wave
Next up was the youth SUP Youth Surf Comp, with Kolton Gilbert shredding the wave and Klayten Perreault trying his best to catch the wave, having only paddled a SUP a handful of times. 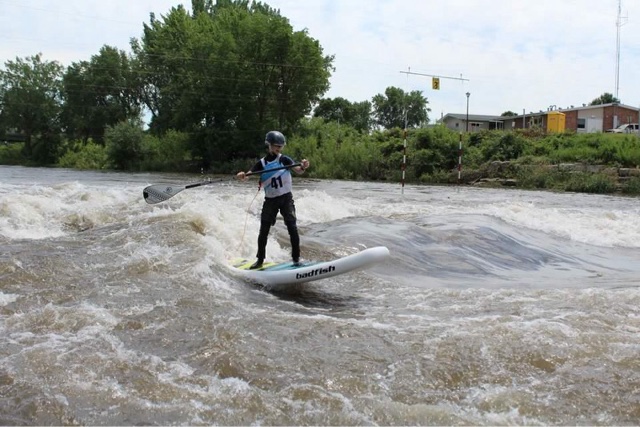 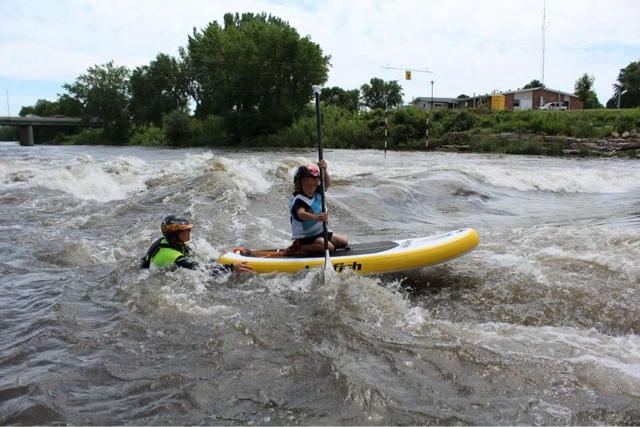 Klayten Perreault paddling into the wave
The surf comp wrapped up with the women’s division, with myself, Katie Gilbert, and Emily Perreault taking to the wave with slashing carves and ollies. I decided to one-up the men’s head stands, by tossing my paddle to the eddy and popping down on the board into a backbend…it worked! For about three seconds anyway, then a Wallace ensued… I’m not sure if the crowd was cheering for the backbend surfing or the wipeout, likely the latter of the two! 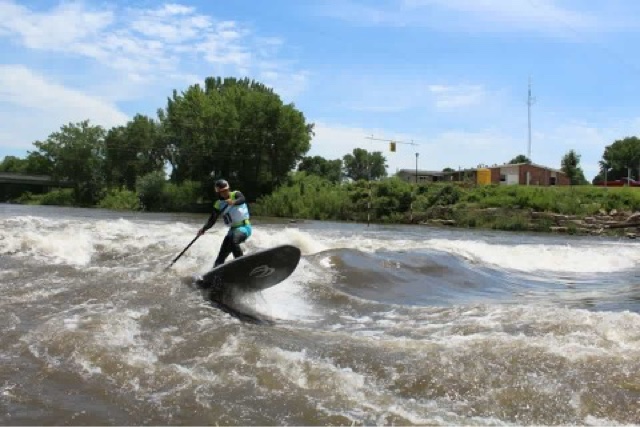 Myself, throwing a carve 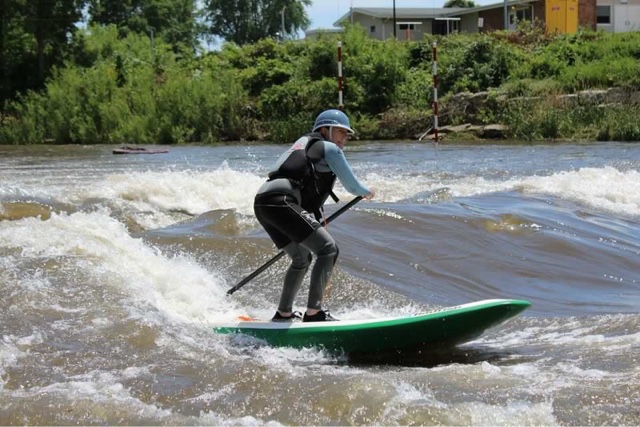 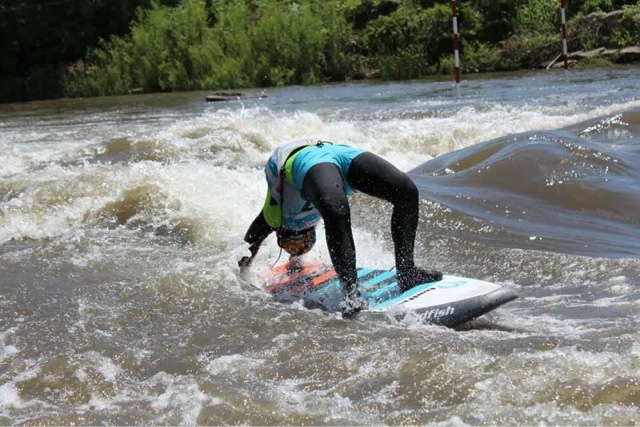 Myself, back bend on the wave
Wrapping up the Challenge was the SUPer X, featuring head to head racing downstream around set gates through the whitewater park. 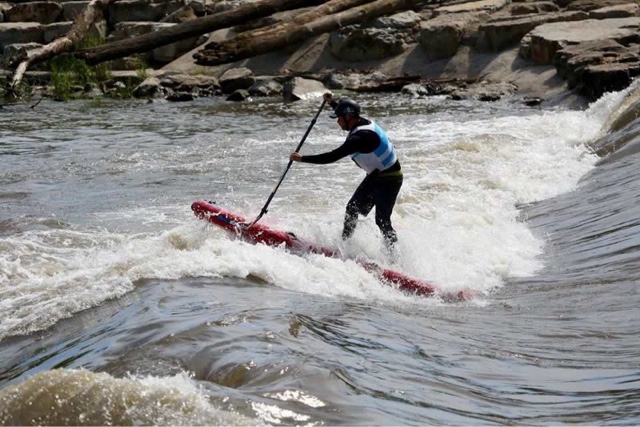 Shannon Thomas pulling through the first drop.
After the stack of hardware was handed out at the awards ceremony, the prize raffle began. The table on the main stage was loaded with incredible prizes: a Jackson Rockstar, Badfish SUP, Werner Paddles, Astral PFDs and footwear, WRSI helmets, NRS PFDs and more. Stephen Wright drew the raffle tickets, and the lucky winners walked up to the stage full of rad prizes to choose which they’d walk away with. 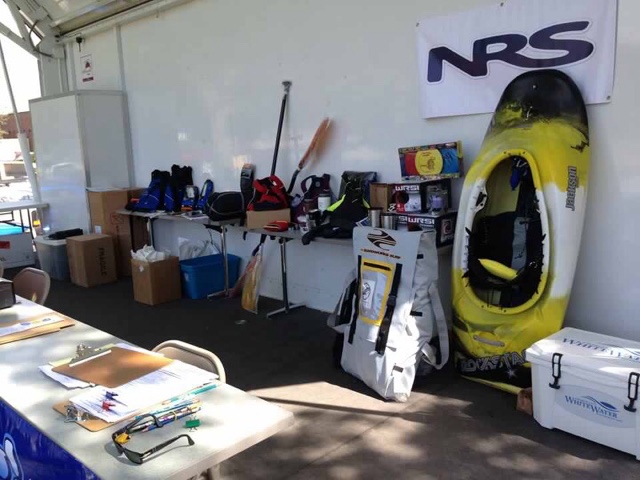 Prize tables
Huge shout out to the Charles City community and all the sponsors who made the Charles City Challenge such a fantastic event. I lost count of how many smiling faces I saw!
Gate Sponsors: CUSB Bank, Cedar River Signs, Edward Jones-Mark Sindlinger & Jeremy Heyer, First Citizens Bank, First Security Bank & Trust, The Insurance Office, L & J Industries, Larry Pump-CPA, Mike Molstead Motors, Quality Auto Service, The Rustic Corner, Subway.
Cardboard Boat Race Sponsor: First Security Bank & Trust
WiFi Hotspot Sponsor: Unggoy Broadband
Whitewater Games Sponsor: Winnebago Outdoor
Whitewater event/prize Sponsors and Supporters: Jackson Kayak, Werner Paddles, Badfish SUP, Astral, NRS, CrawDaddy Outdoors, Bug Protector and more!
If you’ve never been to Charles City Whitewater..what are you waiting for?! Here’s some additional tips and info for your trip to Chuck Town.
R Campground is the best place for camping in Charles City, with tent and RV spaces. There are a few hotels/motels to choose from also. The Pub on the Cedar is hands down the best restaurant in town and it’s right along the river, with excellent food and refreshments and adorned with a whitewater kayak too! Pizza Ranch is another easy option to fill that food deficient quick, only a block from the whitewater park. Head to Aroma’s for your coffee caffeine fix and be sure to get a scone there too. Hyvee and Dave’s Restaurant serve up tasty breakfast items. The local Kwik Trips are easy and convenient for gas n go. Before the day is through, visit the Dairy Queen for a cool treat after boating at the park.
Charles City is a rad little town with a fun whitewater park. If you’re heading to the park ask me about river levels for the inside scoop on what’s available at different flows and put the Charles City Challenge on your must do for next season. SYOTR. 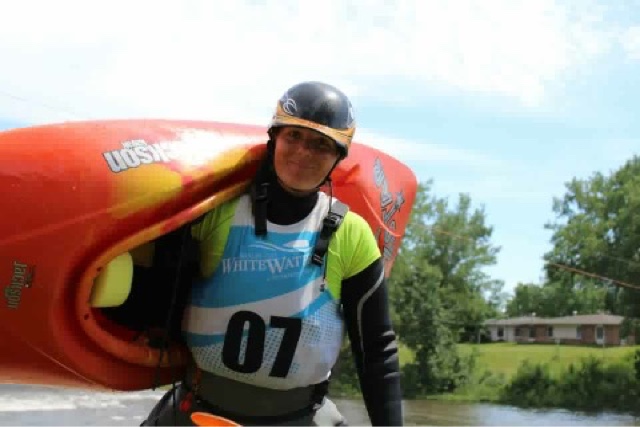