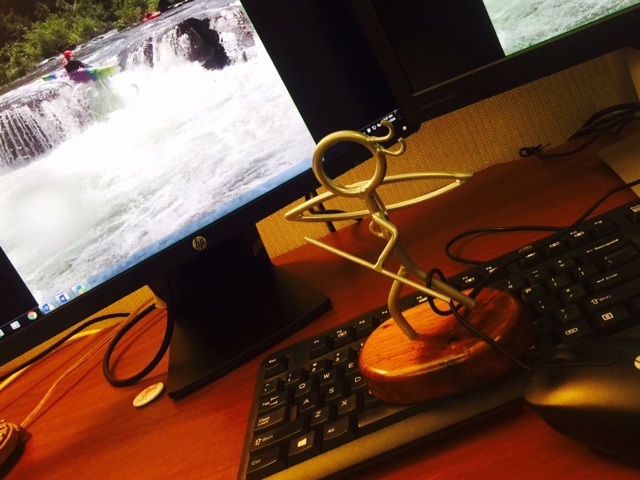 I love my paddling buddies more than – well, just about anything. Paddlers in general warm my heart, even if they’re just strangers passing by with boats on their cars on the way to the river. They’re wonderful in so many ways – generous, free-spirited, courageous, irreverent, hilarious – they’re like Mary Poppins: practically perfect in every way.
And then I read the stuff they write. Eh, paddlers. Elegant on a wave; fierce in a hole; beautifully, surgically precise in a boulder garden – and, all too often, ugly on the page.
I get that a dirtbagger bro doesn’t want to sound like a college professor. By all means, keep the colorful language; embrace your thugness; spread your wings; choose your voice. You be you – that’s why we love you. Just know that sometimes when you’re going for “badass” by mangling the written word, the reaction you’re actually getting is, “What’s wrong with her she didn’t learn that in second grade?” Even worse, people don’t know what it was you were trying to say. And that’s just wrong. 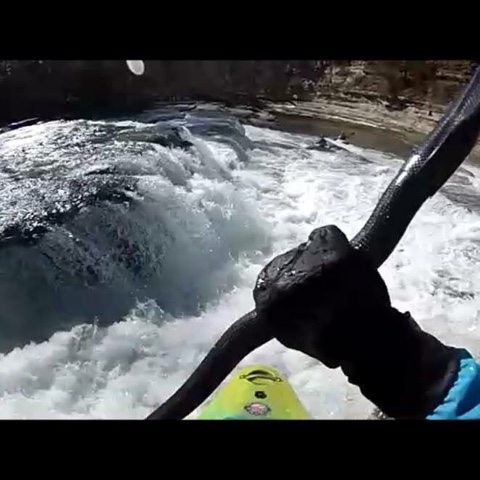 You guys help me on the river all the time. Consider this my way of giving back, with love. We’ll keep it simple and hit a few high points that’ll help you write like a boss without compromising your creek cred.
General Stuff:
1. Periods. If you do nothing else, please accept that periods are your friends. Most of us write on social media a lot. I’m not suggesting that you have to have a subject and a verb, avoid fragments, and not misplace your modifiers when you’re just trying to figure out what’s running and how to get there. But your readers can’t hear what you wrote the way it sounded in your head. If you write one long paragraph with no stops or starts, it can be almost impossible to unwind that disorganized pile of verbiage. Most of the time, when I see something like this, I just skip it (note: most of the examples in this article were ripped from actual paddler online conversations):
>”If you can’t help yourself… How can you help others ??!! Some people only rely on other people helping them out and never think of being responsible or prepaired or informed enough to help anyone else it’s either ignorance, lack of expierience or lack of carring i.e responsibilaty and respect for themselves and other’s around them this happen’s throughout our every day lives not just on the river back country in the mt’s, driving on the road unfortuniatly our society promotes lazyness and a scence that someone else will do it or it’s someone elses job or it won’t happen to me type attitude the only thing we can do is be prepaired, pass on knowledge and ask question’s and pose anwser’s to groups your involved with or interacting with when your out enjoying or trying to enjoy this wonderful world we live in !!! See ya out on the river …..”
No. No, you won’t. Because I’m already exhausted. One more:
>”After a epic portage on the lower wind last winter i put a harness and a ATC in my rescue kit i found old not so stiff mountaineering harness kind of like the ones you find at second ascent fold up really nice also having a petzal jue mar in place of so many prusiks is a good idea to, it makes it a lot faster to set up a one person z drag and it makes it a lot safer to asend a rope if you havent allready broken in your prusik. one last thought, swoop out the candy bar for a small tube of frosting, you wont be so tempted to eat it and with so many people dieing from nuts these days it better to be safe, syotr.”
I think there may have been some good information in there, but I honestly have no idea. What does he want me to do with frosting?
You catch my drift. (See what I did there?) Put a dot where one thought ends and another begins. It’s not hard and is immeasurably helpful to your reader. 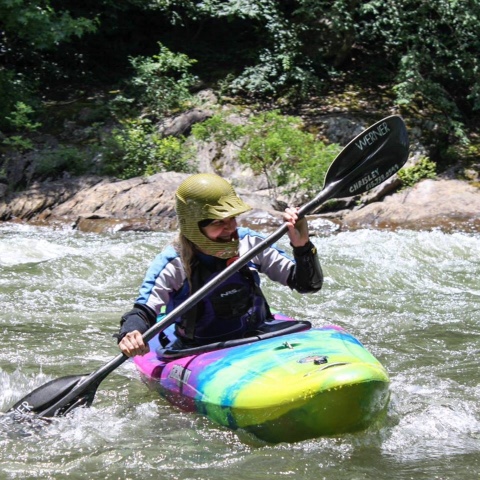 2. Too/to. I see this one all the time, and it’s easy to fix. Here’s the deal: you will only use “too” in a couple (that’s “two” – ehhh, we won’t even go there) of situations. First: when it means “excessive, to a higher degree than is desirable.” Second: when it means “also.” That’s it. In all other circumstances, use “to.”
So:
“You are too (excessively) fat for the 2Fun. Try the 4Fun; it’ll float you.”
“Are y’all skipping Grumpy’s? Me too (also)!”
Otherwise:
“We’re headed to the Nanty to get beatered on the Upper. Want to join?”
“I’ve learned to take any line except the one he tells me to.”
Easy, right?? Mind? Blown.*
Fun highlight reel of Lauralyn’s journey as she’s learned to whitewater kayak. You can’t cheat Wallace!
https://www.facebook.com/lauralyn.chrisley/videos/10203655591807387/
3. A and an. Also very simple. Use “a” before a word that starts with a consonant (all letters except a, e, i, o, u). Use “an” before a word that starts with a vowel (a, e, i, o, u). As follows:
“Dude – Here’s an epic ender. Start the video.”
“Dude – “Here’s a b*tchin’ cartwheel. Start the video.”
(BONUS: there’s an exception for words that start with a long “u.” As best I can figure, that’s because it sounds like those words start with a “y” – like “yoo.” So it’s a “uniform” or “union.” But not “uber.” Also, if it’s an abbreviation that starts with a consonant but the first letter sounds like it starts with a vowel, use “an”: an RBI or STD. If that’s confusing, just stick with the main rule. It’ll serve you well.)
Take a second to make sure you have the right one so you don’t sound like a ignoramus (<–#no #wrong #donotdo). 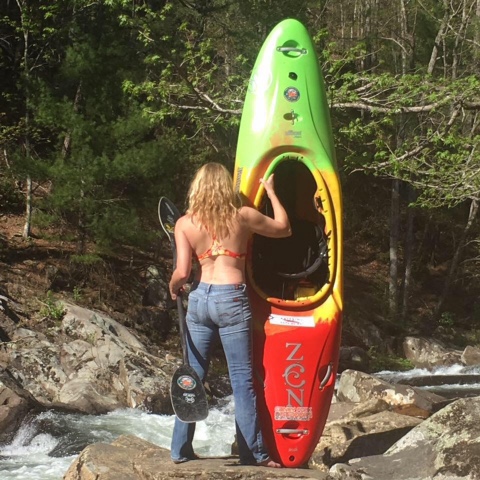 4. DO NOT make a plural with an apostrophe. You make a plural by an adding an “s.” That’s it. Always. Some people argue that there are exceptions, but for our purposes, don’t listen to them.
But what if it’s a family’s last name? No.
What if it’s an abbreviation?? No.
What if it’s some other random thing that looks weird to me, and I feel uncomfortable??? No.
You mean this isn’t right? “The Brown’s are boating on Saturday’s to get as many PFD’s as they can before the end of summer.”
This is me in a nun outfit, rapping your knuckles with a ruler: NO!!!
Apostrophes are like paddle strokes. They have very specific purposes (namely, making possessives and replacing letters that have been left out). You can’t just throw them in willy-nilly because it feels good and do it right.
It’s like this: “The Browns are boating on Saturdays to get as many PFDs as they can before the end of summer.”
Breathe. Let go of your superfluous apostrophes. You’ll feel so much better.
Paddling-specific stuff:
1. Descent/decent. This unfortunate mix-up is everywhere.
The one that means “pretty gnarly” is “decent.” As in, “I had a decent run on Lilly to Nemo at 10,000 cfs.”
But the one that you probably want when writing about kayaking is “descent”: an action of moving downward. This is the river-specific one, most of the time. “PFD” = personal first DESCENT. Make up a trick to help you remember. (This is called a “mnemonic device,” if you want to be fancy.) Like, “descent” has an “s” in it, and that bends, kind of like a river. Or … it has the word “scent” in it. And that reminds you of your paddling gear after a couple days in the car. Something like that; you get the idea.
Don’t let the following Facebook exchange happen to you:
Good morning, woke up with wanting a new PFD on my mind. The one I have is pretty much a Rec vest. What WW vest offers the most bang for the buck??? Thanks!!!
Anonymous Paddler Stohlquist Decent fits my body type well.
Mike Arvidson Not familiar with the decent. Is it new?
Lauralyn Chrisley I have the Indecent. Smaller size of same vest, cut for women.
Mike Arvidson ^deep v neck?
Mike Arvidson Or strapless?
Lauralyn Chrisley All of the above, with inner cups for max lift
Anonymous Paddler It’s a good vest or Woody wouldn’t be rocking it.
Mike Arvidson Doesn’t Woody have the older version? The descent?
Lauralyn Chrisley Yes, but you had to pass a spelling test before they let you order that one.
Right?
2. Flotation. It is totally counterintuitive, but this word for your airbags does not contain the word “float” in it. (Kind of like there’s no “four” in “forty.”) Somewhere, someone is messing with us. But that’s just life. Deal.
3. There is no such word as “paddel.” That is all.
4. A “role” is a part you play when performing at the theatre. We all know that there can be much drama on the river, but you don’t want it to affect your self-rescue. You likely mean “roll” – defined as “to make your kayak return to the upright position when you screw up.”
One last thing. By no means are these specific to kayakers, but this ickiness is rampant. The following words do not exist: “allright” and “alot.” These are two-word phrases, in every case. Like this:
“He talks a lot about Tallulah. Not to throw shade, but maybe he should get through the Nanty upright first?”
and
“Dudes, I’m all right. I just left a little skin in that mank-pile.”
Okay. For now, school is out. (*Bell rings*)
*Blatantly plagiarized from “Home Girl’s Rant” ©2015, Allison Ware 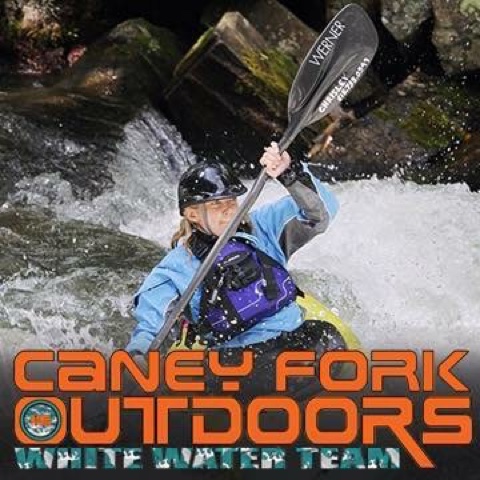 EDITOR’S DESK:
I love this article! How could I not, having this (unpaid) position here at DBP MAGAZINE ONLINE (The World’s Best Free Whitewater Publication)? This article, first written by Lauralyn on 2015-09-07, originally was posted in the Caney Fork Outdoors Whitewater Team blog (link below). It’s a pleasure to bring it to our readers, and promote a gifted boater new to whitewater but very familiar with the written word. The photos in this article are from her entertaining Facebook page.
We are stoked to welcome Ms. Chrisley to our staff. “I write for the unwashed masses.” Perfect, that’s exactly what we Dirtbags are! Check out Lauralyn’s other fantastic pieces, and stay tuned for more new stuff here!
https://caneyforkriverrunners.com/category/caney-fork-outdoors-whitewater-team/