Bottoms up! Ashley Law, Lee Torbush,  and Kate Shaffer at Tablesaw on the Ocoee. Photo: Ashley Law
FIRST…
a short historical sketch of the Middle Ocoee Dam #2.
The Toccoa River starts in the Appalachian foothills of Northeastern Georgia and continues 56 miles to the state line in the twin cities of McCaysville, Georgia and Copperhill, Tennessee. Upon reaching the state lines the name changes to the Ocoee River and continues it’s flow for another 37 miles into Tennessee at a northwestern angle.
Construction was started on the dam in 1912 by the East Tennessee Power Company and finalized in 1913. It’s purpose was to provide power to the Alcoa company just south of Knoxville, Tennessee in Blount County. The contractors at time of production deemed that the pristine building site for the dam and the powerhouse were 4.5 miles apart.  They then contemplated the best way to transfer the force of water downstream to the powerhouse. At this point a large wooden flume was built on river left to connect the water source to the powerhouse. This flume still operates today, the same as when first constructed. 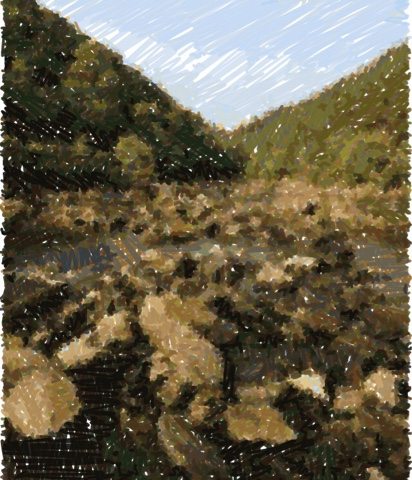 Unfortunately the flume consumed all natural river flow and the Middle Ocoee ran dry for many years, reportedly unnavigable except in rare instances where there was enough rainfall to overflow the dam. In 1939 East Tennessee Power Company was forced by the federal government to sell out to the Tennessee Valley Authority, who acquired Ocoee Dams #1 and #2, then started production on Dam #3. The river still ran dry until 1976, when the wooden flume incurred damage from a rockslide. The TVA was forced to return the natural flow to do repairs on the flume.
This returned flow caught the attention of several entrepreneurs who started rafting companies with pickup trucks and used rafts. Their combined business generated 7000 paddlers on the Ocoee River in the first year and has grown repeatedly every year since. The Ocoee now brings over 250,000 paddlers of all types of watercraft each season.
The initial interest sparked talks with the TVA, who now under contract provides over 100 recreational releases each year. The 35 year agreement is good until 2019. New negotiations are presently underway with the TVA for new releases after 2019. Long live the fun of the Ocoee River. 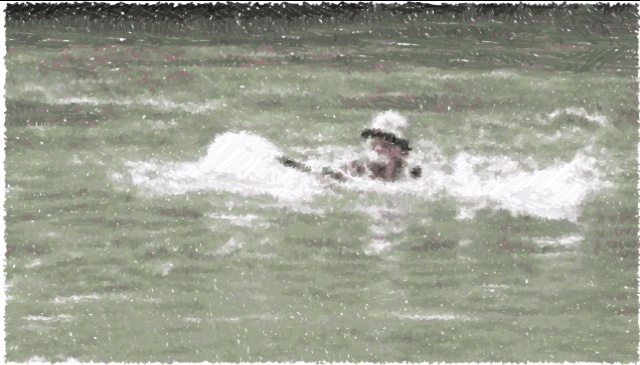 We are still floating at high speed with three paddlers, Mike and I searching over the stern for his guidestick. It appears a little to the left side and we have Shannon, Sam, and Ned backstroke while Mike uses my paddle to divert his own paddle to within reach. By this time we are at the end of Grumpys and eddy to river right so Mike can catch his breath and search for yardsale items. He has lost his drybag and Nalgene bottle. The local kayakers were very helpful in returning the articles to the raft. As this was happening we sat around and had a smoke and laughed off the event. I look the shoreline over and noticing the relics that were positioned strategically on the rocks higher than the normal flow. There was much evidence of the WALLACE gone by. The thing that impressed me was that the boaters that had found items had laid them up for the rightful owner to reclaim them.
We successfully maneuvered the rest of the rapids with me scouting my descent through the boulders as we went. We would run a rapid, then take the five gallon bucket and bail the water from the bottom of the raft. There are many good Class lll  rapids on the Ocoee.  Bailing became a chore after a while, so I started doing it on the fly every chance I had. This seemed to make the paddle go a bit smoother. Shannon and Ned changed sides to make the power of the raft more equally transferred. 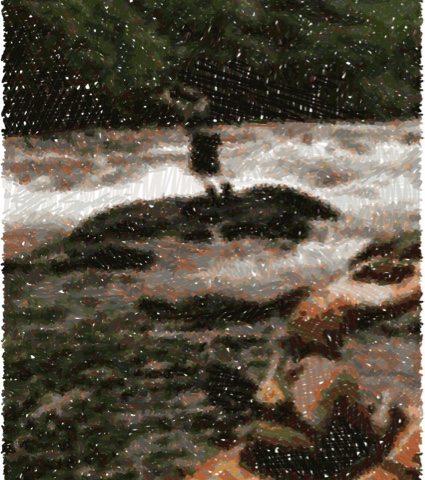 We stopped at the bottom of several rapids such as Double Trouble to watch kayakers play and surf. Todd and Olivia McGinnis were playing at Jump Rock when we stopped. Chris demonstrated the mystery move, where a person jumps from the rock into the heaviest part of the current. The jumper pencils in straight and disappears to resurface 25 yards downstream. We left Jump Rock and meandered onward without consequence to the confluence with Go Forth Creek.
Go Forth is a place with public parking where many that are not wanting to do the full run put in for a short lap and catch the last few major rapids. It was a great place to take a break and empty water from the boat.
Soon we were moving again and coming into Hell Hole. Here Ned decided to throw caution to the wind and ride the bull. For safety’s  sake I will not describe this move. I’m sure you rubber pushers know what this is. Ned made it successfully through and I missed the chance to practice my SWR skills.
Unfortunately Ned’s move took our attention away from the lines we should have been paddling. Immediately after Hell Hole, while getting Ned resituated into position, we realized we were far left and off course for Powerhouse Rapid. We were too late to compensate and accepted our fate. Pushing hard on extreme far left, we angled into the hydraulic. Just before the drop I heard Mike in the background over the roaring rapid, “We’re screwed!” To a rookie rubber pusher, those are not words inspiring confidence. I braced and fully prepared to accept my WALLACE! The boat landed in the hydraulic and surfed safely. We gave two strokes and we were home free.

The rest of the run was flattish paddling to the takeout, so we splashed each other and talked up the run on the way in. Chris paddles up beside us and leans from his kayak to pull Ned over the side, grabbing his shoulder strap on the PFD. Ned, reacting quickly, braces and grabs the edge of the raft and an attached pull strap. Sam, seeing Ned save himself from the swim, jumps up quickly, grabs Ned’s feet, and gives the best toss he has. Ned comes flying loose from the hold he has on the raft and sails a full backflip over Chris’s Axiom. Thinking fast, as Ned flips through the air he grabs hold of Chris’s paddle and pulls him over as he enters the water. We see Chris flailing like a fish on a hook trying to fight the paddle away from him with no success. Finally the struggle is over and both men resurface laughing as the Axiom floats away. We hoist the kayak onto the raft and drain it as both swimmers climb aboard for the lake paddle to the end.
_________________
Thanks to Mike Ward and Eagle Vision Outfitters for a great day on the Ocoee! Check them out on Facebook-
https://m.facebook.com/Eaglevisionoutfitters/
PENCIL DRAWING CAPTIONS in order. (Credit original photos to Gwendolyn Butts)
~Grumpys before release
~Dam #2 and the put in ramp
~Chris Durden couldn’t cheat the Wallace!
~The famous Hell Hole!
~Chris demonstrating the mystery move.
__________________
EDITOR’S NOTE: Michael Potter is a DBP Admin and covers his native Southeastern United States as a correspondent for DBP MAGAZINE ONLINE. He wrote a brilliant piece on what it truly means to be a dirtbag paddler and live the #OneLoveOneRiver Philosophy-
http://dbpmagazineonline.blogspot.hr/2016/07/why-do-we-dirtbag-lifestyle-decoded.html?m=1

0 replies on “INDEPENDENCE DAY ON THE OCOEE ~ Pushing A Bucket Boat down an AmericanClassic. by Michael Potter”

The first photo with the swimmers is actually below Double Trouble.