The mighty Gauley River, known for its world class whitewater, is ranked in the top ten in the world and number two here in the United States. It boasts over 100 rapids in a 24 mile stretch. The Upper Gauley sports 5 Class V drops, like the famous Pillow Rock and Sweets Falls in the Colosseum of Carnage. The Lower Gauley has 3 Class Vs including The Mashes and Pure Screaming Hell.
In 1965 the US Army Corps of Engineers finished the dam that would help prevent flooding of the capital city of Charleston.   They were to name the dam after the city they flooded out, called Gad, but decided GAD DAM would not work. Next they chose the name Gauley Dam, and again felt it would not work as a name. So they used the next city down, settling on Summersville Dam. The dam created a huge lake that is used for recreational use like SUP boarding, lake kayaks and powerboats. From April 1st to Labor Day the Army Corps make sure the lake stays at a certain flow. Once Labor Day comes they lower the lake 70 feet for flood control during the spring waters.

When they first would release water out, they would not give out the amount or when they would release. Many raft companies complained, saying they would love to be able to take their raft guests down the Gauley. So they took the US Army Corps to court and got a mandated release of 2800 cfs (cubic feet per second). That is how Gauley Season started.

That is also how the first Gauley Fest, a huge party to celebrate the Gauley season, started. Usually held the 3rd weekend of September, the festival features music, food, paddling vendors and just great friendship. Many boaters come out to play on the Gauley from Friday through Monday. Dirt Bag Paddlers are famous for throwing down huge parties on Friday nights at Gauley Fest, and for the second year running are hosting a DJ Dance Party on the Main Stage. What are you waiting for? It will be here before you know it…

The river, though made famous through autumn releases, still has great whitewater even in the spring and summer. From inflatable kayaks to rafts, you can enjoy a trip on the Gauley from 180 cfs all the way up to 12,000 cfs depending on the river section.
Why do I love this river? Well back in 1994 this was my first ever rafting trip. My sister took me on the Upper Gauley. I was 16 and didn’t know better, and I ended up surviving my first ever Wallace at Sweets Falls. Since then I was hooked. But it’s not just the great whitewater that I love. The scenic views are also amazing, especially Canyon Doors on the Lower Gauley. Plus, getting to go out and see the river at lower water and seeing how the river is made really humbles you. 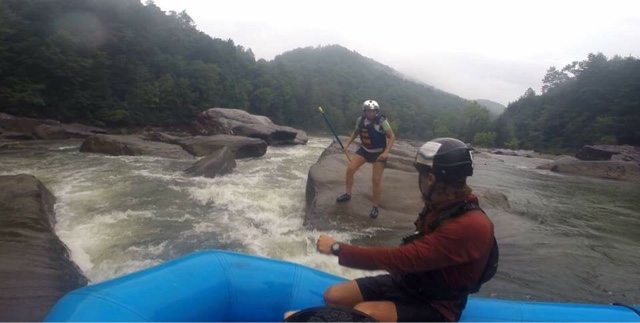 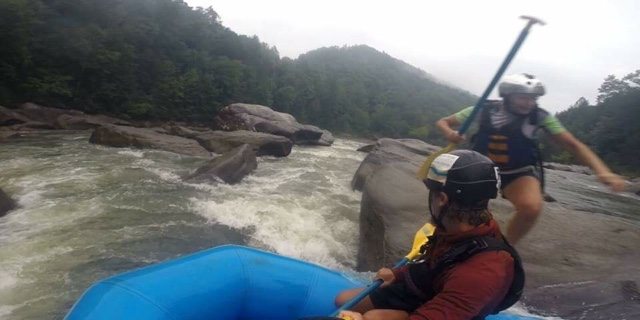 The highest I’ve seen the Upper was around 7000 cfs, over double the normal fall flow.  It was Gauley Fest weekend my first year guiding in 2013.  I was riding along that Friday. The night before it had rained really hard, so many creeks were up. Just before Insignificant, the first Class V, we saw one of the creeks that normally never has much water blaring into the Gauley. From that point I knew it was not going to be fall flow. As we got to Pillow Rock the river was looking like 5000 cfs.  The water was really pushing up onto Pillow, and Volkswagen now was a hole that about ate us up. Just before Lost Paddle, our trip and many others that had got onto the Upper before they pulled most of the trips to the Lower gathered, watching the Meadow dump thousands of cfs of angry chocolate milk. We all went together for safety since many had not seen this water level before. It was definitely above 6000 at this point and going up. The biggest thing was going thru Iron Ring.  The second wave was enormous, and we saw a few rafts flip there. Once we got past Sweets, (and at this level you actually go for dildo since it’s a reactionary wave at this level) we were glad to get to lunch. It was scary but I’m really glad I got a chance to see it.

The lowest I’ve paddled on the Gauley was around 200 cfs, one of the lowest levels we will take you down in the summer. The greatest thing about this level is how you get to see what makes up the rapids. Lost Paddle really humbles me, getting to see all of the undercuts and scary stuff that make up that rapid. Iron Ring is cool at this level; we can run the duckies through the cave, and let the folks jump into the floom next to Woodstock.  (In case a raft gets stuck on Woodstock, they can jump into the flume away from the major entrapment.)
The highest I’ve run the Lower Gauley has been around 8000-9000 cfs. Some of the Rapids that really get big are Canyon Doors, Mashes, Diagonal Ledges, Heaven’s Gates and Pure Screaming Hell.  I swam the Gates around 9000 cfs (where Chicago Mike Toughill and Frank Sade almost drowned) but it wasn’t as scary as the time I got stuck in the death slot of Pure Screaming Hell. The raft got pushed hard right before the slot. We tried to drive back but hit the rock just before Hell Hole, getting pushed in. Things would not been as bad, but the slot had a huge tree limb in there. Two folks got pushed out and luckily flushed out into the current; the rest stayed in the raft.

The lowest I’ve run down there was about 1000 cfs on a duckie trip.  The lines are about the same with the exception of the one before the take out. Lower Mash and Stairstep are definitely butt kickers. I got to experience that Wallace at Stairstep this year, but that’s what happens when you go big.
I have had my share of swims on the Gauley, mostly on duckie trips. Two of the biggest have been at Pillow Rock. The first Wallace I got pushed hard right on the other side of Volkswagen while swimming with everything I had to get away from the major undercuts on the right side. And my longest swim was last year when we Wallaced after going up onto the Pillow. I was always told to hold your breath and count to 10 if you swim at the Room of Doom. I got to 9 and was finally popped up way past Volkswagen. Not a bad swim if you actually hold your breath well… But it’s a deep swim!
One of the best opportunities this year has been training on the summer Gauley program.  Since I now work the full Gauley in the fall, this gives me a chance to learn the different levels of the river, from duckie to small rafts. I have so far been on over 10 duckie trips and 6 raft trips. Mostly when out on the duckies I am helping by showing the guests where to go. Learning to catch eddies while having coolers strapped on your duckie is also fun, especially when you Wallace and try to reflip your boat. Still, I have felt much more confident in my skills. We have some of the best guides to work with, showing you so much and pushing you hard. This is a incentive thing, you really want to do it.  And I am glad I had the chance to show everyone what I’m made of.

One reply on “THE BEAST OF THE EAST ~ West Virginia’s Gauley River. by Kelly Gladen”

As a former raft guide on the New and Gauley, I love reating the stories. Brings me back to 15 years ago. I don’t get to the area as much any more, but the NRG holds a place in my heart like no other.