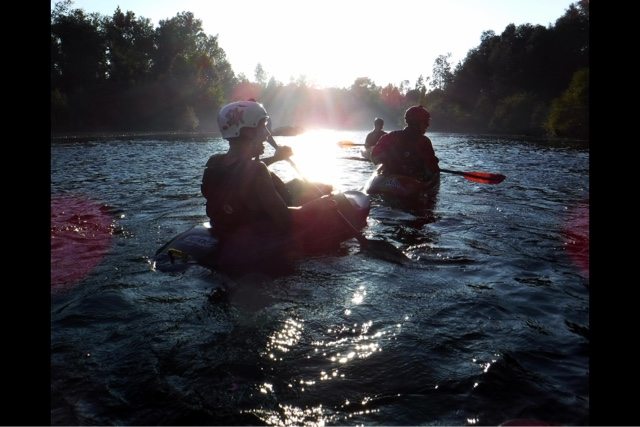 “As long as there are young men with the light of adventure in their eyes or a touch of wildness in their souls, rapids will be run.” –Sigurd Olson
This is where America went for the gold. Literally! When gold was discovered on the South Fork of the American River in 1848, it sparked the greatest mass movement of people in the Western Hemisphere, igniting our country’s passion to push west for those seeking fortune and adventure. Boaters seek that same thrill today as they parade down Highway 49 with raft topped vans and kayak adorned cars to the rushing waters of the South Fork.

During the spring and summer the South Fork is a playground for whitewater kayakers and rafters of all different levels.  The river descends at a steep gradient of 30 feet per mile. The first 5 miles from the Chili Bar access are chocked full of exciting Class III whitewater with rapids with scary names like Meat-grinder and Trouble Maker. The so-called easy section is the next, nine miles through the valley consisting of a number of Class II rapids including Barking Dog. After that, the river enters what paddlers call “The Gorge.” It’s the most challenging series of Class III rapids, descending at 33 feet per mile toward Folsom Lake.
In the past several years finding water in Northern California has been just about as rare as finding gold; however, through deals made with upstream reservoirs and powerhouses along the Federal Energy Regulatory Commission guidelines, timed releases on the South Fork keep dependable flows of whitewater pouring into the valley during the day. Towards nightfall though, much like a faucet the flow drops till it releases again the next day.

“If you want to go paddling,” said Conner Manley to a youngster on the beach at the put in at Henningsen-Lotus Park, “then don’t get a job when you have to work during the day.”
My crew of Manley, Ethan Howard and Kristin Kettehhofen are all young employees of The River Store, the local paddle shop just up the road. They had just closed the store for the night and were now heading out on a sunset paddle with me. Low flow paddles are not the norm on the South Fork, but “paddling is paddling” I told them, and besides we’ll have the river all to ourselves.

About a mile down the river makes a sweeping curve to the right, and then plunges into two standing waves with a hole between them as it turns again to the left. In high flows the river’s velocity, turbulence, and converging currents create a steep hole, making it an appealing and challenging site for area play-boaters. In low flows, it still produces an exciting surfing wave for the boys. Local legend says this Class II rapid got its name when a neighborhood dog sprang to the bank barking loudly at the rafters and kayakers as they went downriver.

Conner and Ethan take turns in their play-boats, one after another, testing their skills on the churning boil. In a cross between ballet and bull-riding, the boys choreograph a dance of spins, flips and rolls, all before the wave spits them out for one more try, one more time. Ethan drops the nose of his Dagger playboat into the turmoil of the Dog, heading straight into its current. Skimming at the edge of the standing wave, he dips forward, attempting to somersault, only to be buried by crashing water. Even in low flows the Dog can still bite.
“That wasn’t really a loop,” calls out Kristin, “but, it was something.”
Paddling back smiling towards us in the eddy, Ethan says “Did it look cool?”
“Yeah it did.”

Conner is planning next year to attend the World Class Kayak Academy, a traveling high school for kayaking students exploring rivers and cultures around the world. He is most at home spinning on the wave, doing doing maneuver after maneuver. He lose his momentum after a while, rolling back into depths of torrent before being spit out the other side. In high flows, he would have to wait his turn behind the rest of the play-boaters lining up like kids waiting to ride the roller coaster. Inching forward one by one. It’s a boater’s decorum so to speak, waiting to surf the wave one at a time.  He told me that sometimes the wait could be a long one. But on this evening he shares it only with Ethan.
The sun is now starting to hanging as low as the water in the river as we continue down river. The rocks and trees are silhouetted in the glitter of the stream. I take the lead at Highway Rapid, a long rock garden wave train. I twist and turn and scrape against the stones along the way. The rapid proves to be a bit tricky even in shallow water, but water still rumbles and few can resist it. Naturalist John Craighead says, “The call is the thundering rumble of distant rapids, the intimate roar of whitewater. A primeval summons to primordial values.”
The last one is Swimmers Rapid, rightly named because it seems to dump the commercial raft customers at end.  It’s a victory lap for us. I look to Ethan and say, “This my best day of the week.”
We paddle forward toward the Greenwood Creek take out just as the sunset has turned the river gold.

EDITOR’S NOTE: We are pleased to announce that Nick Carlson, author of the excellent blog OUTSIDE ADVENTURE TO THE MAX and a frequent contributor to our Magazine, has been named our latest DBP Admin for the Facebook page. A talented writer and lover of all things kayaking, be it whitewater or flat, Nick brings a flair to his storytelling that we are always stoked to share. He also took the photos, including this selfie, of his American mission. He and Kristin are easily identified, and Nick clarified the other paddlers: “Conner is the white helmet, Ethan in Red.” Check out OAM!

Drone Footy of Rafting the SF
Wallaced!! at O.A.R.S.