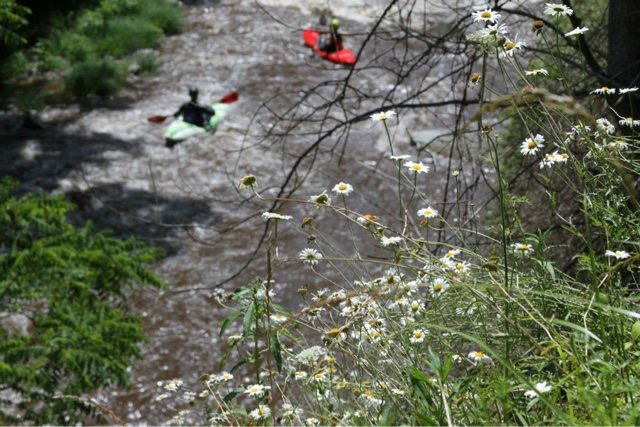 Upper Nanty. Photo cred Rick Thompson
I wrote this on April 28th of 2015, after my personal first descent (PFD) on the Upper Nantahala. With Nantahala Outdoor Center’s GAF (Guest Appreciation Festival) coming up, we’re seeing a lot of people considering running this section for the first time. This is what it was like for me.
The setup:
I wasn’t planning on running it yet. The description on American Whitewater freaked me out. The weatherman was calling for 100% chance of rain, and it was still April-cold in the North Carolina mountains. Plus, my boof is still finding itself. My roll is still wishy-washy. And I hate the thought of being THAT girl – the one who ruined everybody’s trip with eight swims in less than a mile.
And then the sun came out, full force, and I watched people bounce down the waves all day. I walked almost the whole section, making notes in my head: boogie water, boogie water…ooooh, scary…boogie water, boogie water. All those helmeted warriors made it look easy, even when they Wallaced. I felt like a poser with a camera, in a t-shirt that said, “I shred the gnar. My boyfriend likes to watch.” More like, “I rub blisters on my heels. I’m too chicken to paddle.”

Mike Arvidson in Troll Hole. Cred Dana Arvidson
I’m not sure what happened. I didn’t really talk myself into it, but somewhere during the course of the day, I decided that if the people I trust said I could handle it, I would paddle the next day. I was still scared to death, but I’ve kind of gotten used to that. You couldn’t assemble a better fantasy team than the one I was with to help me take on the river. And I hoped they’d say no.
The next morning dawned bright and sunny. We had breakfast and hung out, and I tried to chill for the verdict. My friend Samantha Ruppelt (team Jackson) told me that with the higher water level, later estimated at about 750 CFS, she was inclined to have me put in below Troll Hole and run the easier second half, this time.
I was relieved. And disappointed. But I thought it was for the best, and I was off the hook. But we kept coming back to the topic. Finally Sam asked me, “Do YOU want to do it?”
Of course I didn’t want to do it. I wanted to skip it.

Mike Arvidson.
Samantha and fellow big-stuff paddler Michael Neff did a quick first lap and pronounced the river “fast and beefy, with huge holes.” But there we were, all geared up, with the river sparkling in the sun and people standing around talking, like this was fun. How bad could it be? I asked Sam if I could roll in the eddy just below the put-in. She answered, “I wouldn’t advise it.”
Great.
That’s where I turned my brain off, picked my boat up and headed down the stairs.
The takeaways:
1. It’s faster, they said, than anything you’ve paddled yet. They were right! What looked like boogie water from the road took all of my energy and concentration to navigate – like barely hanging on to the steering wheel of a race car down a watery obstacle course. It seemed like we’d been on the water 30 seconds when Sam said we were over halfway through. It also seemed like a year. But after a few minutes, I kind of got used to it. Survival instinct?
2. T-rescues actually work when you’re with people who know how to do them. I’d never actually had one work in current before. That day, it happened *cough!* times.
3. I Wallaced once. As I was sulking in the eddy, my friend Ted reminded me of all of my friends, all of whom I know are better boaters than I am, who had swum the same rapid. “You’re not special,” he said, and I felt much better.
4. My roll still works on big, fast water on new scary rivers. I bore even myself with my rolling insecurities. (So imagine everyone else!)
5. Now I know why you crazies purposefully bounce off of rocks. It’s not as much fun (to me) as boofing off of a drop, but since you’re going to hit rocks if you continue to do this kind of thing, you might as well have some modicum of control over the process. Right??
6. Looking down at Troll Hole from the top may be the most surreal experience I can recall, ever. Again, from the road it looked formidable, but this? It was ridiculously tall and steep and loud, with huge pillows of water all fighting each other to get to be the one to devour me at the bottom. Like a giant cone descending into doom. I think I was thinking, how did this happen? How did I get here, and why? What do I do? (“Straight left!”) I would love to be excited that I was brave enough to paddle into that, but the truth was, there was no other choice. It spat me out at the bottom, like I tasted bad, after all. And…I kind of liked it.
7. I was ready to get off the river after surviving Troll Hole, and my peeps didn’t let me. That seemed like a good sign.
8. Note to self for future reference, when I have skills: it’s not a good idea to give panicky paddlers advice on the river when they don’t know you and they’re being guided by their own highly competent people. It just makes them want to stab you in the neck with their paddles.
9. I got a full-body workout. In a kayak. Calves, abs, shoulders, back. And maybe some of it wasn’t due to having a death-grip on my paddle.
10. I am the luckiest newb on the planet to have people willing to do this stuff with me. And I have lots of work to do.
Because of course I wanted to go.

Stop and smell the flowers. Cred Rick Thompson
Other stuff you might want to know:
​This section runs during scheduled releases; you can find the dates online at Duke Energy’s web site. It can get pretty crowded, and parking is limited. If you park at Patton’s Run, the put-in for the regular Nanty, you can sign a waiver and get shuttled to the upper put-in. When this section has water, so does the Cascades, a popular Class V run just upstream.
​The paddle is about 3 miles, and a lot of people lap it. Some choose to get out at Troll Hole rather than going all the way down to the top of Patton’s run. The whole thing is roadside.

Kim Montaniel in PB&J. Cred Cleech Photography
​PB&J and Troll Hole are the rapids that get all the hype, but there’s one in between them that I saw flip more boaters than either one of them.  Nobody seems to know the name of it, but I think I finally tracked it down: Bridal Veil. (Is this someone’s comment on marriage?) There’s a pool to roll in at the bottom.
This part of the Nanty is a lot warmer than the one starting at Patton’s!  It’s weird to get to the end of it and feel the water turn icy within a few feet.  It’s also really, really pretty and, in spite of my earlier write-up, fun (and not nearly as scary as it used to be).
Rick Thompson’s video of hitting Troll Hole-
https://youtu.be/1_226ZCq324

EDITOR’S DESK: We are stoked to have Lauralyn here on the Staff of DBP MAGAZINE ONLINE, as well as an official DBP Admin on our Facebook page. She’s smart, funny, and frankly much better at paddling than she pretends to be. Either that, or she’s got mad photoshop skills.

2 replies on “OVERCOMING THE FEAR OF WALLACE ~ A PFD on the Upper Nantahala. byLauralyn Chrisley”

Outstanding writeup! I just got back from my first solo on the lower, and of course am thinking “What’s next?” I expect that I should run the lower quite a few more times and some other runs before tackling, or being dunked, on the Upper. The honesty in your writing was refreshing and provided hope. Best wishes & thank you for sharing.