Beaver Fest. The single greatest weekend I have ever had in New York! OK, let us back up a bit. Growing up in western NY you come from either rolling hills or a flat concrete forest. As a paddler there are plenty of local videos of steep creeks with fast slides and insane holes. Most are seemingly in places that are either too far to reach in regards to budget and time, or they require serious hikes and climbs while carrying a 35-45 pound kayak.

Then there is Beaver Fest. Held this year on September 3-4 near Croghan, NY on the heavily dammed Beaver Creek, hidden in the majestic Adirondacks mountains, consisting of three different short sections of whitewater and an additional section on the Raquette River, this fest is full of amazing whitewater ranging from wild class 3 slides to a few good class 5 drops. All are within easy access for multiple runs.

Though this whitewater festival is tucked away in a quiet little New York town, on the shores of a reservoir, there was nothing quiet or mundane about this party. Drawing a crowd of 200 to 300 people, I was a little surprised it wasn’t bigger from all the hype that I’d heard. But let me be the first to tell you – looks are truly deceiving. I quickly learned Beaver Fest wasn’t just about paddling great whitewater, it is also the first 2 of 3 races in the run to be crowned the King of New York. 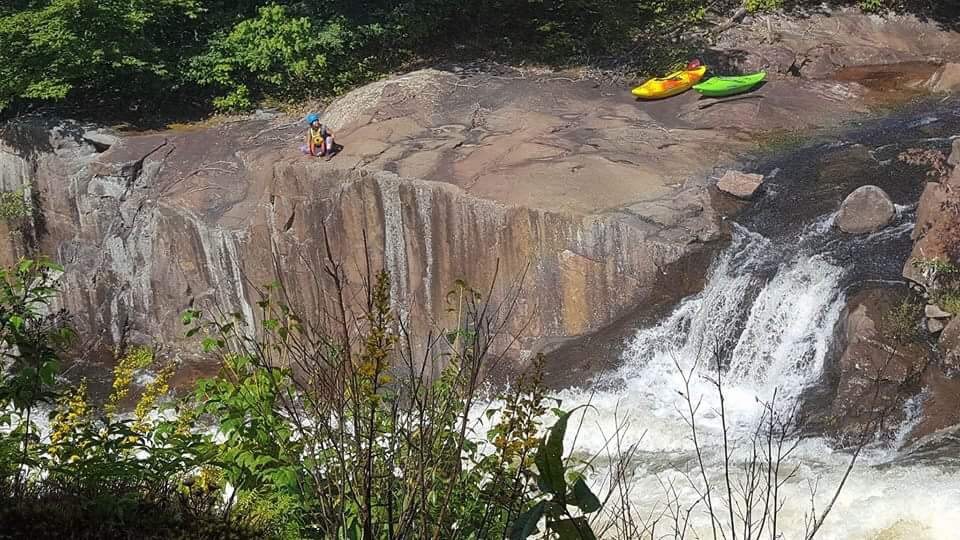 Arriving on Saturday morning, I pitched my tent and headed out to catch some of the first race on the Raquette. Unfortunately I got lost and and never made it – Wallace! So I made a quick trip back to the festival to check out the Taylorsville section. Less than a mile long, this section boasts six class 3 and 4 rapids. The first rapid is the Beaverator. You can opt for the easy straightforward line on river right, or run a little left of center for a technical boof that if missed could land you in one sticky hole. Within eyesight is one of the most intimidating looking slides I have had the pleasure to witness and run. The Great White Slide is just that. Once you’re in it, it’s a wild ride through a whitewater world. With another man eating hole at the end, paddlers run this rapid multiple times trying their luck at punching the last hole. This is one of many great places to watch a bit of carnage.

The next two rapids are a bit unique in my opinion. The creek pools for a short distance before splitting around an island with two separate but equally exhilarating rapids. To get the most out these wild rides you need to first run Dogleg, a long, fast and challenging run. At the bottom, paddle to the other side where Mother Nature clearly had paddlers in mind, with an easy out for a short walk to the second rapid, Mind Scrambler. This is a short but intimidating looking chute with water pushing hard to the right, creating a huge curling wave that sends you left over a small drop at incredible speed into a juicy hole.

The final rapid on this section is Power Line, probably the coolest rapid on this section. This is not only the longest rapid, but has the most variety of features. Coming in from the top there are two options. Running river right sends you down what I was told was tough little chute. On the left the river drops to the right a bit, creating another fun and fast slide. Though this slide is much shorter than the Great White Slide, it was also a bit steeper, ending in a hole that will keep you if you hit it sideways. The second part if this rapid has some great features – a couple of small drops, holes to punch, holes to avoid, and fast moving green tongues. There are plenty of options for play and places to hone your creeking skills. And what better way to finish a run than with a 6-8ft waterfall that can be boofed just about anywhere? From there you take out, rinse and repeat.
After the release or two to three runs, most everyone heads back to the festival ground for a little rest and food. For when the sun goes down on the Beaver, the Beaver Fest fires it up – literally – raging one of the largest bonfires I have partied around since my homecoming days back in high school. And like… well, paddlers to a flame, the lighting of the fire signaled the official start of the party. As the masses filled the front of the beach house, live music started playing, stories from the race on Raquette River were told, and beaters regaled stories of their first time down the Taylorsville section. And if one kept their eyes open while wandering through the crowd, you might have seen some familiar faces such as Jared Seiler and the Demshitz crew, Adam Homberg with team Pyranha, Emrick Blanchette of the Quebec Connection (winner of the Raquette River race) to Pat Keller with LiquidLogic (winner of the Eagle section race).
And once you’ve had your fair share of partying (or in my case playing Captain Pat, a drinking game involving memory and coordination) you might want to crawl, stumble, or be dragged back to your tent at some point, because Sunday holds two more amazing class 4-5 runs. Staggered dam releases here allow for boaters to paddle the Moshier section in the morning and the Eagle in the afternoon. With the second race of the King of New York taking place on the Eagle section, the Moshier section is a great warm up run for all competitors.

All boaters put on well below the dam on flat water. But only the big boys and girls paddle to the other side and make the hike to the top of the Moshier spillway. I don’t have the exact length and height of the spillway, however it resembles a full on ski slope. And just as white. Incredibly steep and long, it starts immediately with a 15 ft or better drop before descending down a rocket ride of whitewater. With only a couple of holes, it is deceivingly easy looking. At the end most of the water washes river right and if you fail to stay right, or end up upside down, there is a massive boulder that spells certain death.

Unable to make my way by foot to the first two drops, I opted to hang out at Moshier Falls, a serious class 5 rapid with three good drops. The second one is a munchy hole that swallows boaters for a snack. This hole can be avoided by a well placed boof on the left. This was by far the best place to get your fill of carnage and skill!

But it’s not over yet. Sunday afternoon played host to the second race in the King of New York series. Held on the Eagle section of the Beaver, this lap is short, steep, and really fast. Though the water carved a deep channel through the mountain, there was easy access, packed with spectators and boaters. The run consists of 3 steep chutes and a nice 6-8ft waterfall at the end. With plenty of places to watch the carnage, I found myself at the bottom of the second slide which ends in a hole, a great place to fish for Wallaced bodies. As the race commenced, the competitors had to worry about random boaters as well as their time. This created a very serious mood on the creek as racers collided and got held up by others that were stuck in an eddy or were just simply in their way.

Though Beaver Fest has come and gone, the King of New York continues on at the next New York festival, Moose Fest (on October 15th). And if after reading this you feel like you missed something special, it’s because you did. But it will return next year and I hope to see even more people there. SYOTR!
Whitewater King of New York on Facebook-

https://m.facebook.com/wwkony/
PHOTOS in order of appearance

4) Sitting on the Moshier section spillway.