A year ago, eight of my paddling buddies and I got to take a clinic with Eric Jackson. You know – the guy whose name is all over my boats. And my paddle. And my car. And my Tennessee-whitewater-kayaking heart.

It was like this…I was all set to head for the Cumberland Plateau to Rendezvous, the annual fundraiser/paddling orgy put on by the Tennessee Scenic Rivers Association. Paddlers from all over the area come up for the live auction, camping, food, tasty beverages, and to argue about boat brands and whether kayakers or open boaters suck superiorly. And, of course, the paddling. Part of the fun is seeing what the weather gods have ordained for the year – which of the sparkly gems strung across the Plateau are going to be runnable for each skill level, and who’s going to swim them.

And then my friend Deborah Webb called and asked me whether I thought she should go to Rendezvous. (What? No-brainer!) Because, she said casually, there was this Eric Jackson Clinic…

Whoa. Rewind. What? What level?

Class II-III, she said. On the Nantahala, she said. 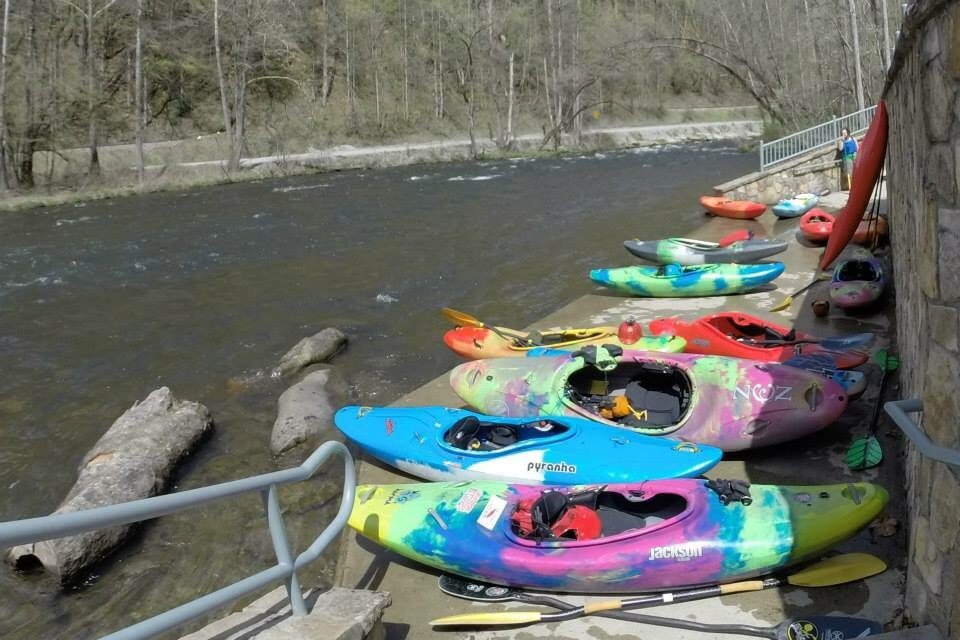 I don’t remember much about the frenzy of the next couple of hours, but I seem to have called Nantahala Outdoor Center to see if there were spots left and found that the class was, inexplicably, practically empty. Then I must have called every paddling buddy I could think of to pass the news along. Oh, and I rented a bunkhouse, apparently. And that’s how, on the morning of April 11, 2015, the nine of us sat at River’s End Restaurant, gaping out the window at the figure a few hundred yards away, bustling around outside the famous Jackson Kayak trailer. I swear you could see the cleft in his chin from there.

We were all a little nervous about hanging out with a world-class paddler. Would he be bored out of his mind with our rookie skills? Condescending? Aloof? Hum “Club Boater” under his breath down the whole river??

Actually, he walked up, said, “Hi, I’m EJ” and started snapping selfies with us. Yep, we were pretty much smitten from the get-go. He gave us a quick run-down of what we’d be doing on the river, finishing up with the fact that we’d be required to flash our “gang sign” at the top of Nantahala Falls before running it.

He pointed at me: “Quick! What’s your gang sign?” I didn’t have time to get creative, so I shot him the double bird. (I know, I know…but he put me on the spot, and I got flustered.) In a heartbeat, he came back with, “Awesome, both hands! You gonna throw your paddle up in the air and catch it?”

We made so many great memories that day. Mr. Jackson was very intent on giving us our money’s worth. He told us he didn’t have his hearing aids on, so if he did this (nod, smile), he had no idea what we just said. (He did that kind of a lot. I’m pretty sure he missed all of our “that’s what she said” jokes, which is fairly tragic.)

We talked rolling, eddying, ferrying, strokes. He told us NOT to paddle through Patton’s run, so we could learn to relax and make strokes count. He told us that rivers are made up of five things: rocks, eddies, eddy lines, holes, and waves – and that they’re all there for our paddling pleasure. He made everybody take the lead. He signed my beautiful Karma with, “LC – go for it! EJ,” which promptly washed off in the river. (Bad plan.) He taught us stuff and threw out compliments, when we earned them. Maybe best of all, he messed with us, each, individually.

What made the biggest impression on me that day was that it was crystal clear the whole time that THE EJ was having the time of his life. After the class, we went back to NOC for dinner and saw him having dinner with his wife Kristine. My esteemed CFO teammate Mike Arvidson and I looked away, not wanting to disturb them, but he called us over and introduced us. And later, when I was outside on my cell checking in with the dog sitter, I heard a long, obnoxious honk behind me and turned around to see EJ with a mile-wide grin, waving out the window of the smiley-face trailer, framed by tongue-wagging Dalmatians.

It just added to the afterglow that several days later, EJ posted a video of our clinic on the Jackson Kayak blog. We? Rate. Here’s the link.
http://jacksonkayak.com/blog/2015/04/13/ej-clinic-like-anyway/
He was even nice enough to give TSRA a plug when he found out we were playing hooky from a day of Rendezvous.

By the way, his gang-sign strategy worked with almost 100% success. Only one of thirteen paddlers Wallaced on that nasty bad-mojo-spewing Lesser Wesser and was hand-of-godded by Eric Jackson. Because it’s my job to make my friends look good.