The Nantahala Outdoor Center provides a Guest Appreciation Festival for the southeastern community each fall. This gathering is based mostly, but not solely, around whitewater events. The event is highly publicized and brings an astronomical amount of people to converge upon the sleepy little valley located due west of Bryson City, NC. to paddle the Nantahala River.

The Nantahala is one river with multiple personality disorders. At the time of GAF there is a scheduled release of the Upper Nantahala which combines with the Lower Nantahala release at Pattons Run. This creates a totally new attitude for the whole length of the river.

For the hardcore paddler the upper release starts with the Nantahala Cascades, a very fast moving, narrow, creeky run containing tight turns and big drops. Boat control is an absolute must here. At the bottom of the Cascades starts the Upper Nantahala. This is a class III-III+ creek run which is once again fast and shallow. There are plenty of eddies for the kayaker with enough skill to catch them. Be careful to not get hung on shallow rocks, as they are plentiful.

Beyond the Upper Nantahala the two releases merge at Pattons Run to finish out what is referred to as the Lower Nantahala. This section runs approximately 8 miles from Pattons to the NOC takeout behind the outfitter store. This is basically a class II-II+ run with a couple of the rapids being questionably class III. These three completely different sections when run simultaneously make the Nanty’s demeanor anything from “What a fun day!” to “I may need a new set of drawers now!” 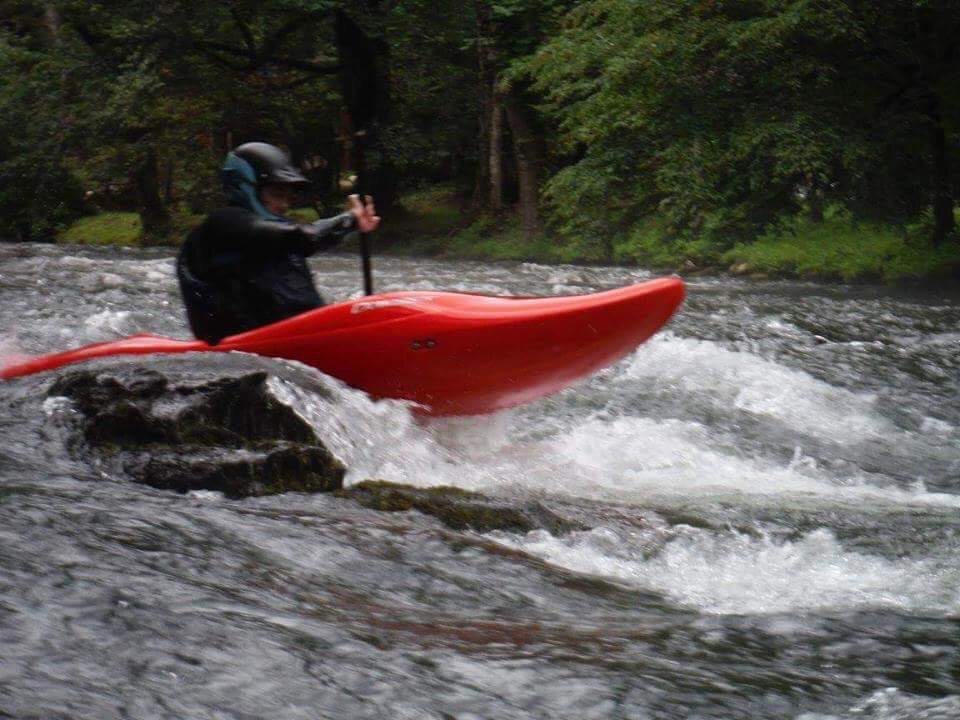 On the Monday before GAF I had spoken with Jeff (Hero) Vannoy and contemplated plans for the weekend. I kinda nicknamed him Hero because he is always running the hero lines. Everyone needs someone to look up to. No he isn’t Ben Marr, Pat Keller, or EJ, but he is my friend. I respect him on and off the river. The plan is to run my pfd on the upper, meeting my brother and his son at Pattons, where Jeff will change boats from his Squirrel to his Axiom. After a short break we will continue onto the NOC takeout.

The week is long for me. I think constantly about the excitement of the Upper Nantahala. This is an introduction from rivers into creeking. I have scouted this section before and have an excellent memory for rapids. In my mind I’m ready. My confidence is up and I’m all sorts of excited to get this opportunity.

Finally the weekend is here and my brother, nephew, and I make plans to camp at Smoky Mountain Meadows, then meet Jeff at the NOC the next morning. On the way over to Bryson City, Jeff calls me. He informs me that one of our mutual friends wants to buy an Axiom at the NOC but can’t be there to pick it up. I inform him that I have the money and we will get the boat somehow.

The next morning I make it a point to wake up early enough to visit Jimmy Jones, who is on the other side of the campground. With a much needed visit to my friend cut way too short, I wake my brother up. A few minutes later I call Jeff. He is already at the NOC and has taken care of the Axiom issue. We meet in the parking area and set shuttle. I run into a few GCA members that I know, and Nick Bonner of the Paddle Crackers. We speak a few words and I’m off for my pfd. 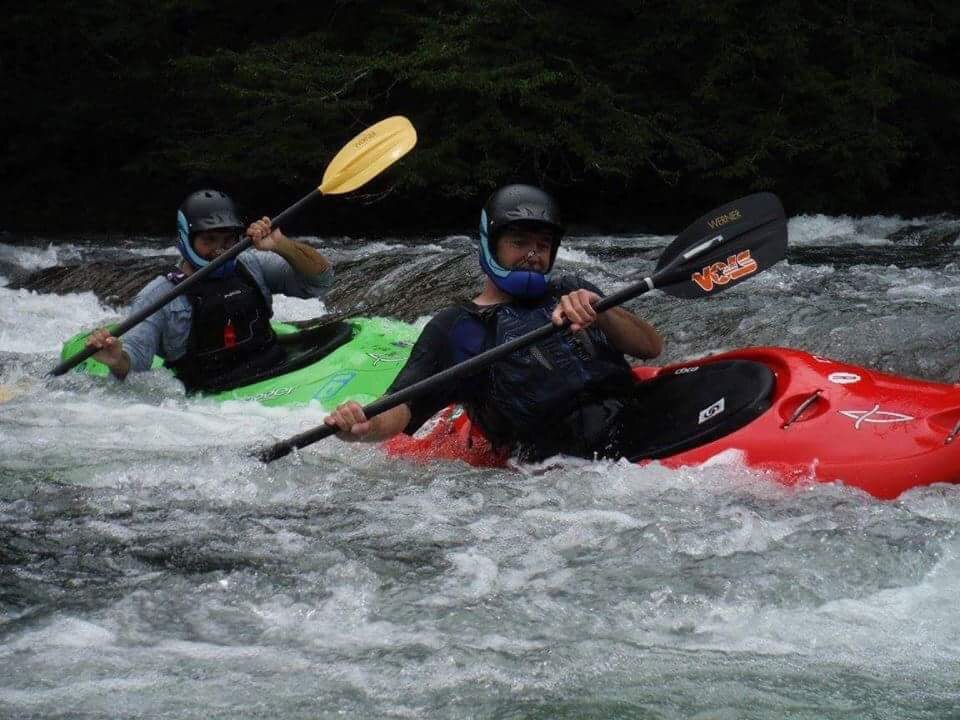 The traffic for the Upper and Cascades is high, being as this section doesn’t flow very often. Without much room for unloading, the area already overflowing, I’m forced to pass up the unloading zone. As I drive by someone yells “Potter!”. I turn to see the father and son team of Lee and Hunter Torbush with Josh Hendricks, all three putting on for their pfd. I have no choice but to go on towards the Cascades section to return for my own unloading.

Upon returning, my brother drops Jeff and I off and drives down to the second rapid (PB&J) to watch us run. Jeff and I awaited our turn to migrate down the stairs to put on. I’m a mixture of nervous and anxiety as I drop my boat off the concrete ledge into the water and prepare myself for my first real creeking experience.

Jeff runs the first drop and grabs the river right eddy. I turn downstream and follow suit. I drop the first ledge and punch across the river toward the eddy. While entering the calm water and exiting the stream flow I find myself upside down. I have barely gotten started and I’ve already flipped! I set position and roll back up into the eddy beside Jeff. I’m confident in my roll but surprised by the speed of the water flow.

We sit there for a moment while Jeff commends me on my roll and we examine the next rapid. My anxiety is gone now, I’m flat out tore up like a train wreck! I take a moment to catch my breath and and we peel out to run the first big rapid. It’s read and run with pick and choose (dang it! ) rocks at different intervals. I style it and catch the eddy at bottom river left.

Jeff slides into an eddy in front of me and I attain my way up beside him. At this point he tells me that there is no stopping until we get to PB&J. He reminds me of the eddy on river right just above the ledge. He explains that we need to catch that particular eddy and ferry over to river left for the drop.

I watch him peel out and go around the bend out of sight. Not being able to see around the corner, I peel out and follow. As I round the bend I get a little close to the left bank and notice a decent sized rock pushing the flow toward the right side of the river. I navigate away from the bank, following the current. This action forces me to drop into a hole sideways which lands me upside down once again. I set position and roll up, only to find myself angled at 11 o’clock, in the wrong direction from what I need to catch the eddy that I see Jeff sitting in. I’m going to run PB&J straight through involuntarily. I don’t want to run it backwards so I pull a stroke to my right. Before the paddle leaves the water I’m upside down again!

This time the flip is not clean. I immediately started taking head shots. We are not talking little taps on the noggin. The first hit peels me completely from the home position to my back deck, and I reset quickly for protection. Upon resetting I suddenly get bombarded with an onslaught of forthcoming rock, each hit making me feel the pressure all the way down my spine. My body seems to fold back and forth like an accordion. I’m taking the beating of my life here. I keep holding my breath, awaiting some calmer place to get back to the surface. I’m afraid to try my roll while getting hit after hit by this many rocks. I’m actually dazed at this point and losing concentration.

Finally I’m out of breath and know that I have got to pull out. I reach up and yank the skirt and shove my head to the surface. I take a couple of seconds to look around and collect my bearings. I realize that I’m finally in the calm water at the bottom of the rapid. (Not that I need calm water now.)

I see my brother and nephew standing on the concrete ramp looking directly at me. I swim to shore and try to shake it off while I talk to them. They are telling me how they watched the boat bounce out of the water each time I connected with the rocks. I take my time to recover. I’m in no hurry! I am bleeding all over the place from rock scrapes. I have little chunks of rock rash and missing skin on four knuckles. There’s a knot over my left eye and a bruise under my chin. No big deal there, the most pain is not visible. My head is busting with my heartbeat, immense pain shooting down my spine between my shoulders. 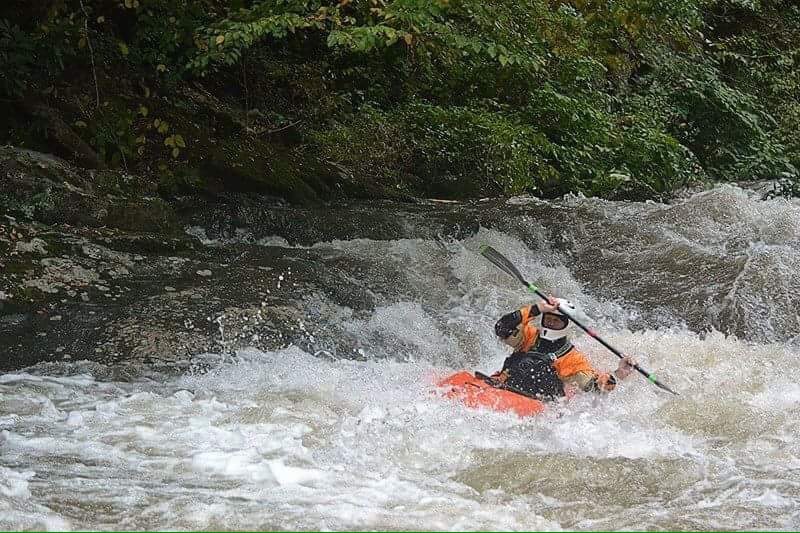 I look down at my sweet fullface and thank God for my new helmet. There is river moss shoved in every possible opening. I must have looked like a life sized chia pet when I emerged from under that boat! I realize how lucky I was. This was not a beatering, it was a full fledged monkey stomping!

After a long period of time (20 minutes or so) Jeff finally asked me if I was out or if I was going to run. No way I’m letting this stop me. I’m hanging in there like a hair in a biscuit!

We finish the run with only a couple of instances not even worth mentioning, and meet my brother and nephew at Pattons Run to finish the Lower Nantahala with them. The lower run went well with no incidents. I’m very proud of my nephew for a clean step up run here. 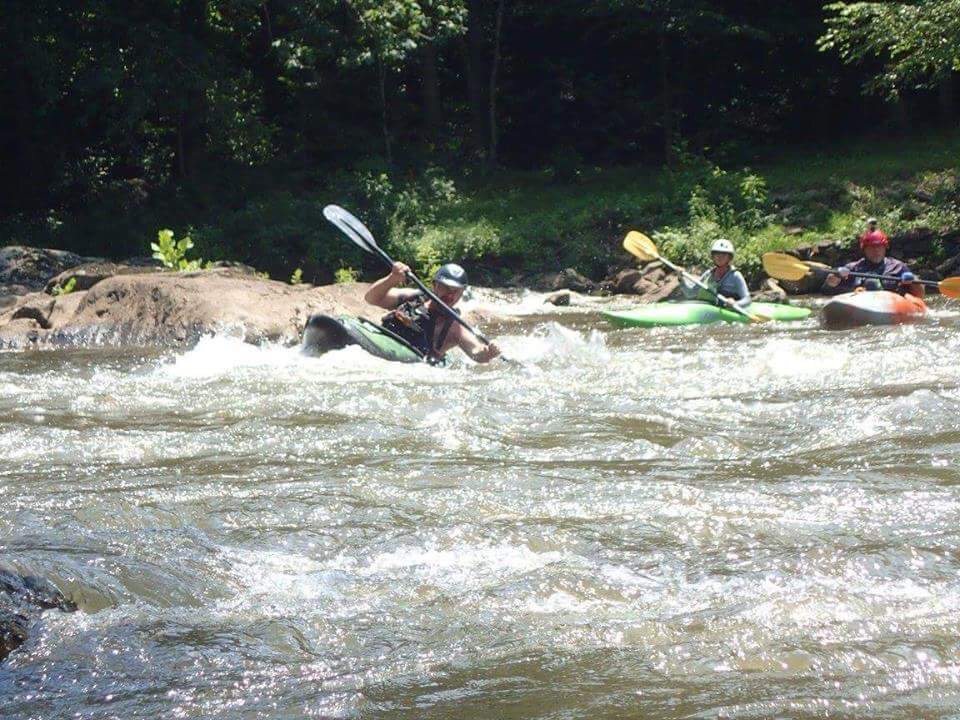 Of course I met many more of my paddling friends while running the lower section. I got to speak with some of my GCA peeps at the takeout. I also ran into my DBP family at the NOC, and Doug Waters of Madcap Helmets was pulling security there this year.

I wrote this the Tuesday of the following week, still not fully recovered from my whipping. I will be back on the Upper Nantahala as soon as I catch it running again to get my revenge. Hopefully I can do it without participating in David Mc’s Upper Nantahala Triathlon. (Paddle, swim, run down road chasing boat!) Hope you enjoyed the reading. Looking for a new lid? Facebook Madcap Helmets and tell Doug that I sent you. Be safe on the river. Hope to see you soon.