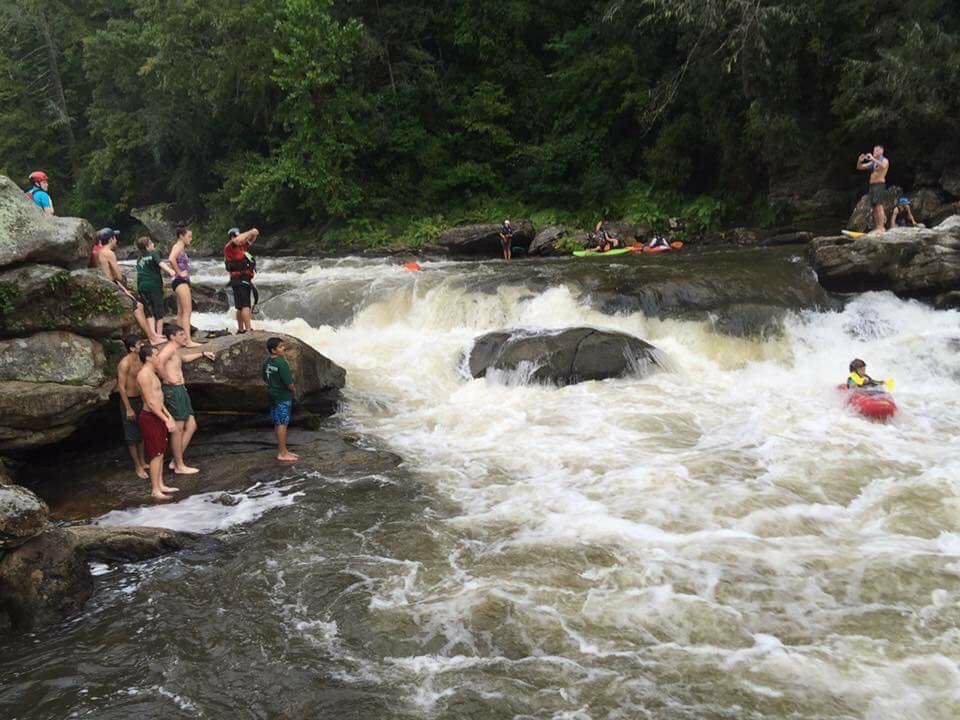 I had been paddling whitewater for about a month and a half when it happened. Rewind back to July 5th when a friend, DBP Admin Michael Potter, convinced me to go on a PFD trip with him down the Tuckasegee section 3 in his Squirrel 85. Although I swam plenty of times, I was ADDICTED to whitewater from then on. I got myself a Remix 69, along with all the gear, and ran the Tuck again with Michael a following Sunday. From there, I believe I paddled the lower Green twice and FB9 twice. It was then that I made the fatal rookie mistake: “Whitewater isn’t that bad, I can handle something harder.”

So one Saturday in August 2016 I awoke to some friends wanting to paddle the Chattooga River section 3.5. I knew this was challenging, but at first I had a “good” feeling about it. I hadn’t been taught the proper lessor from the river yet. We met in Travelers Rest, SC and proceeded to drive to the put in several hours from my home in Hudson, NC. Along the drive, I was “convinced” the trip was not that difficult, and that I would be ok. I did have a pretty solid flat water roll so I still felt “good” about the trip. However, it wasn’t until we read the forecast of rain, plus reading the online gauge, that I began to feel queasy. The Level: 1’6″ 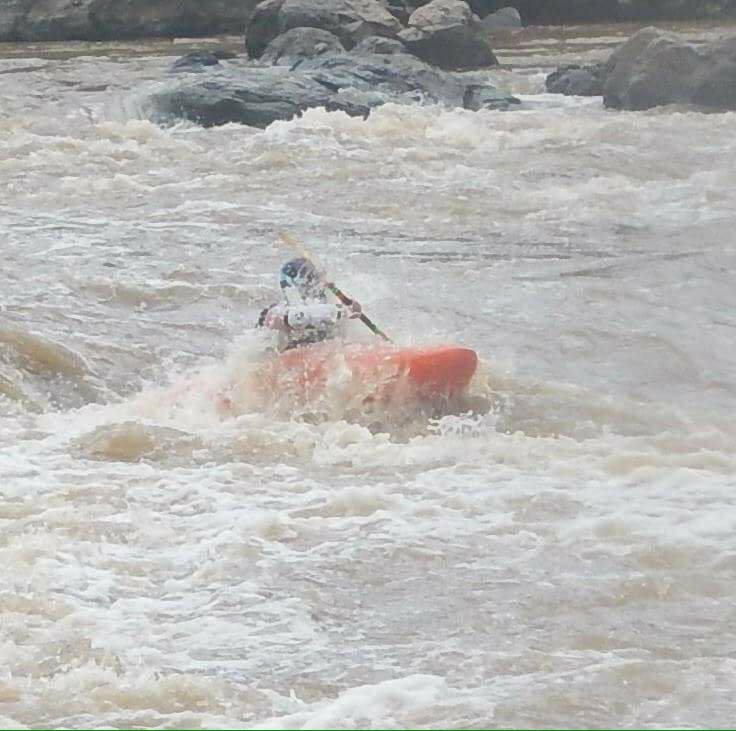 The trip itself started out as you would expect: bad lines accompanied by no rolls (except for practice at the put in) and one or two swims. But not a bad first half. As we approached Bull Sluice we all got out on river right to scout the rapid. Since it had been raining hard on us it was “up pretty good” as one paddler in our group put it.

Zac scouted the rapid for about 5 seconds, jumped in his boat, and ran the double drop perfectly. This is a guy that has been paddling for at least 5 years, I’m not sure. After seeing this I thought, “Man that looked easy! I can do that.” So, so wrong. Not to attempt his same line, but to run the single drop by eddying out on river left, then running the single drop river center.

After too much scouting, being told which lines to take, and which eddy to catch on river left before you peel out into the single drop, I finally got in. As I sat in my boat, hands clammy and about to throw up, I did my usual prayer for safety and guidance. As I write this a year later I can’t help but feel like I knew this was going to go bad, I just hadn’t experienced a good enough beatdown by the river yet. Skirt checked, I slowly peeled out into river center, working my way left. I made it through 90% of the entrance of the rapid, but the last small drop before the eddy flipped me.

I was more focused on where I wanted to go than where I was at the time.

As I flipped I immediately wet exited, knowing there were rope teams on river left and right, parallel with D-Cap, and that I probably wouldn’t hit the roll. As I surfaced from my wet exit, the first and last thing I saw was my friend Zac with his hands on his head on river right, mouth wide open. One spectator said I landed on top of D-Cap and was sucked backwards, butt first.

I don’t remember that part. I remember seeing Zac and then quickly getting beaten from every side. The best way to describe it would be like swimming down a fully flooded sewer drain, violently beating off the walls. After what felt like an eternity, I found myself in a hydraulic, completely pitch black. I tried swimming and was continuously slammed into a wall. 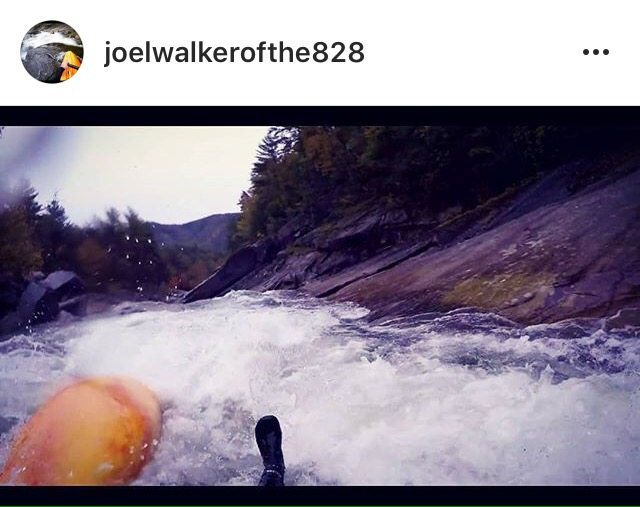 At first I started to panic: “Here I am, 3 hours from home, with people I barely know, about to drown on a river I shouldn’t be on and leave my 3 year old without a father.” It was at that EXACT moment that time stood still. The knocking and banging subsided. I became totally at peace, accepting of my fate as I started to black out. Then I heard a voice, God.

Inside my head, in my own voice I heard: “Calm down, what do you know?”

About a week prior to this trip I was at my cousin’s pool in Baton, NC telling him about my new addiction to whitewater kayaking. He is a fireman, and has had to pull drowned victims out of Wilson Creek and other areas a few times. So he is proficient in Swift Water Rescue aka SWR. So as I was accepting my fate, when I heard the voice, I truly believe that is when I blacked out. At first I thought I had died because I felt myself standing on that concrete pool deck, the sun hot on my back. I could literally feel the chain link fence pressing against my forearms as I was discussing SWR techniques with my cousin. I could smell the tobacco on his breath as he discussed with me how to escape a hydraulic: “Curl into a ball and hit the bottom, kick out as hard as you can.” Then I awoke, doing this exact motion, and I could instantly see daylight at the surface!!!

I surfaced, and a few throw ropes hit me in the head, one swinging me to river right. As I was swinging, several paddlers had come upstream into the rapid to try and assist me while I was below D-Cap gathering my thoughts, once of which was a Norwegian (I believe) gentleman who was the first to speak to me as I surfaced: “Are you alright Joel?” His thick accent will always stick with me. As I climbed out and walked downstream to where my boat was being “collected” the situation began to sink in and I lost it. I vomited, and thanked God for sparing my life.

ANOTHER OF JOEL’S WALLACES, ON WILSON CREEK

As paddlers we all know the risks in what we do, and we are accepting of them. Since that trip, I learned a lesson most paddlers do at one point in their life: Just when you think you can best the river, it is getting ready to teach you a rough lesson. So stay humble and always, always respect the river.

Also, there is a NRS Pilot knife with half a sheath at the bottom of Bull Sluice or somewhere downriver if someone wants it. 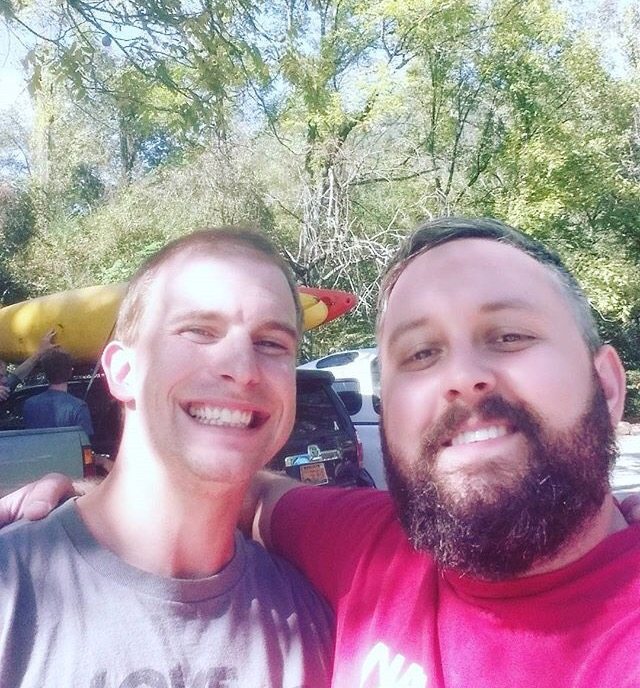 EDITOR’S DESK: Joel Walker is a southeastern kayaker who has an entertaining feed on YouTube. “Smash that subscribe button!”

17 replies on “Near Death Experience On Bull Sluice. by Joel Walker ”

others from this trip reported the level to be 1’6″. doesnt matter either way.

I know the world of river gauges is an incredibly diverse and frustrating one. The chattooga is read as percentages of a foot, so instead of 1’6″, the level was 1.6′. Nit-picky I know but when you’re publishing something online where people will inevitably question your qualifications, it’s good to have your Ps and Qs straight. Learn your lessons from your swims and don’t make the same mistakes twice. Brave of you to share your story online, I certainly wouldn’t put myself out there so publicly but I applaud you for doing so.

Thoughtful insights and def on the level of what we appreciate at the top rank here at DBP. Sharing wisdom and empathy rather than flexing ego and running people down. Good on ya, TL.

thank you, I hope someone can learn from the error of my ways that day and realize that we all sometimes make bad judgement decisions as it is in human nature. its always best to trust your gut and walk it when you arent feeling it. thank you.

Also hopefully the audience will see that paddling above one’s current ability is also not only dangerous, but highly frowned upon in our community because it puts everyone at risk and tragedy can impact how we are perceived by local authorities, affect releases and access, etc etc.

We hope the Author considers these consequences more closely as well.

The story is far more logical and enjoyable to read than your comment. The difference between 1’6″ vs. 1.6′ somehow has any significance to anything here? You wouldn’t publish a story about the tribulations faced after making a mistake your first year out and running a drop too high in difficulty, but you don’t mind calling out an insignificant detail in a story and then falsely profess its significance and lecture the author about the importance of fact checking when you write? You should boat more and comment less

Sorry if my comment is out of place. Not here to make enemies, see you on the river

You have gone insane… this is a equilivant to a celebrity releasing a sex tape because it’s good publicity… stop prostituting your self and the sport of kayaking to become a YouTube Caleb.

This is a story by a kayaker for other kayakers and boaters. Prostitution implies an exchange of money; here there is none.
We enjoy the exchanging of tales which most others couldn’t relate to.

I tell a story of my most humbling experience and you equate it to prostitution. makes sense.

This is a rather crass attempt to garner attention, don’t you think David?

It’s Celeb.
Caleb is a name.
And save your disrespect for your Mama.

dang, lord forbid someone tell their experience that humbled them in the sport. as with anything in life, someones always going to get upset. idc, as long as one single person learns from my experience or it humbles them in their paddling career, its alllll worth it.

It’s been a few years, but isn’t decap downriver in Jawbone? I could be mistaken. Anyhow, glad you’re still paddling. Don’t let the negative comments get you down. It’s a tough crowd and they are probably just sensing a little sensationalism. Swims can feel pretty dramatic when you’re just starting out. Either way, nice read and glad you’re still getting out.

There are 2 rocks called decap on the chattooga. Jawbone right above hydro, and at bull sluice the rock immediately to your left after boofing the notch. Also 2 “watauga chutes”, far left at Rock jumble and right at jawbone above 2.1″.

Good deal. Thanks for the clarification.