Genevieve Royer is a young up-and-coming kayaker hailing from Montreal, Canada. Her motto “In love with every outdoor sport, especially Whitewater Kayaking!” describes her on her Instagram feed. Give her a follow! Staff Writer Jay Carpenter, aka Moonshine Kayaker, caught up with this young boater just before she headed south to compete in the Green Race in November. 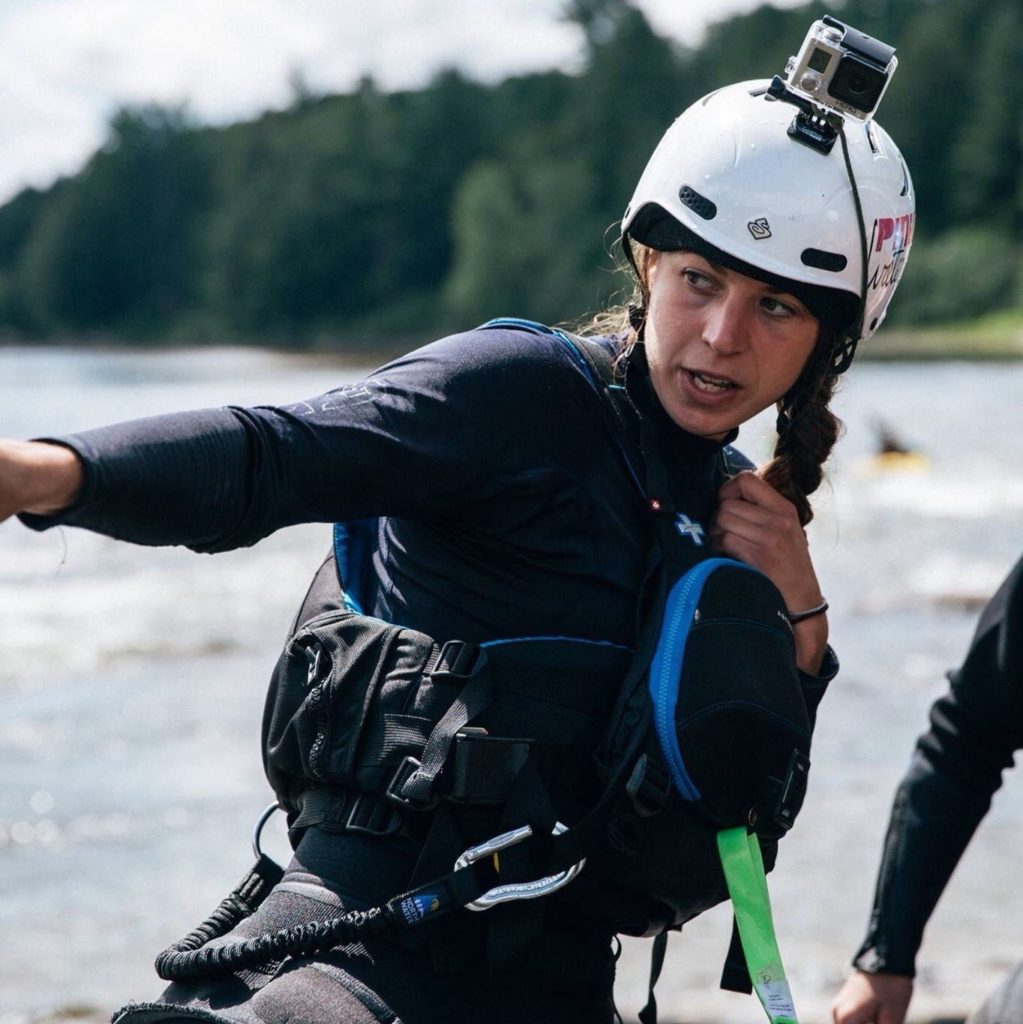 Moonshine Kayaker: Hello Genevieve. So, how does it feel to capture the title of Queen of New York after nearly missing it last year?

Genevieve Royer: I am happy, but mainly stoked that I competed in all three events. I was really scared about the Raquette race and the Eagle as those rivers are completely different than what we have in Quebec.

MK: Though only you and Erin Savage went all 3 races it was pretty close with Erin taking wins in the first 2 races. Can you tell us how the final race went for those of that weren’t there?

GR: To be honest, I didn’t go fast in either the Raquette or Eagle race, catching a few eddies by mistake at Eagle and messing up my line in Colton Falls. I did those 2 races to push myself, knowing I was strong enough for it and that it would help me to gain confidence on those type of rivers more than for the race itself. The Moose race is different. I have raced it 3 times, and it is an endurance race and I am in my comfort zone which helps me to go as fast as I can. Erin was leading at the start until I accidentally pushed her stern in the second rapid where she did a 360. After that I knew she was right behind me until she accidentally dropped her paddle in Powerline. I am happy that I managed to get good lines down Crystal even though I was tired reaching it. 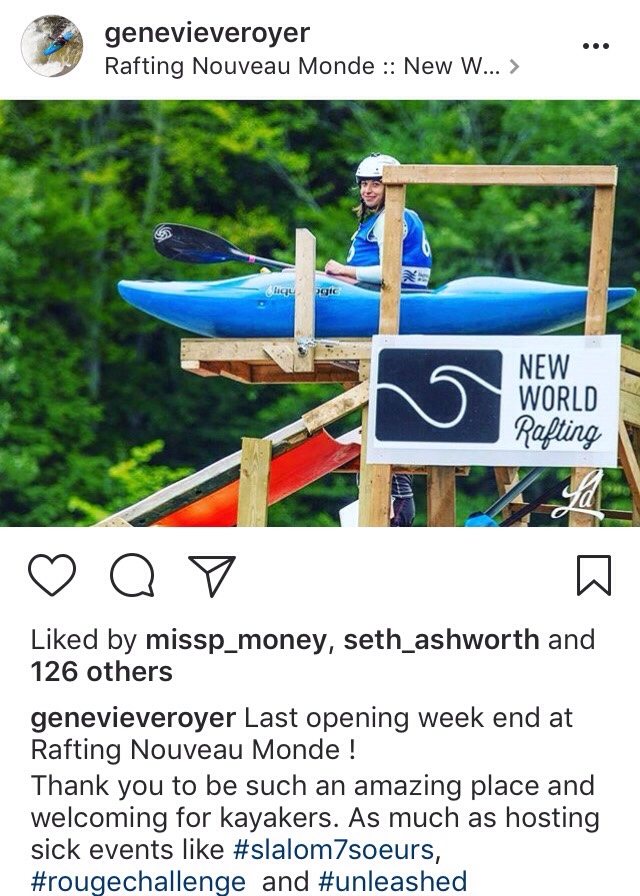 MK: In your bio you mention you started kayaking back in 2011. For anyone to compete in the QONY series you have to be pretty close to the top of your game. Do you have any special training to prepare for competitions?

GR: A lot of kayaking and some slalom training. I think before being able to push yourself at 100% to go fast in whitewater races, you need to be able to keep precision in your stroke at every second of the race. This is what I am struggling with right now, it is hard to go fast and be stylish, so most of us need technique application training.

You need to be able to keep precision in your stroke at every second of the race.

MK: What events have you competed in other than the QONY series?

GR: I have been competing in the Série Eau Vive Extrême Québec since the first edition 2 years ago. The series consists of 5 events (previously 4) and 4 best results count. https://www.facebook.com/Quebecserieeauviveextreme/ The series races are the Neilson Race, Rouge Challenge, Hollywood Head to Head, Montreal Eau Vive and Slalom 7 Sisters.

I also competed in the Green Race last year for the first time. I basically drove down there a week before the race and tried to get as many practice laps as I could before the race (which was not many with the releases schedules) as I never did the section before. I have a really bad memory and the race was like discovering a new river ahah! I did my worst lines down the river while racing and it looked a lot like Rush Sturges’ race lap (you should go see that). 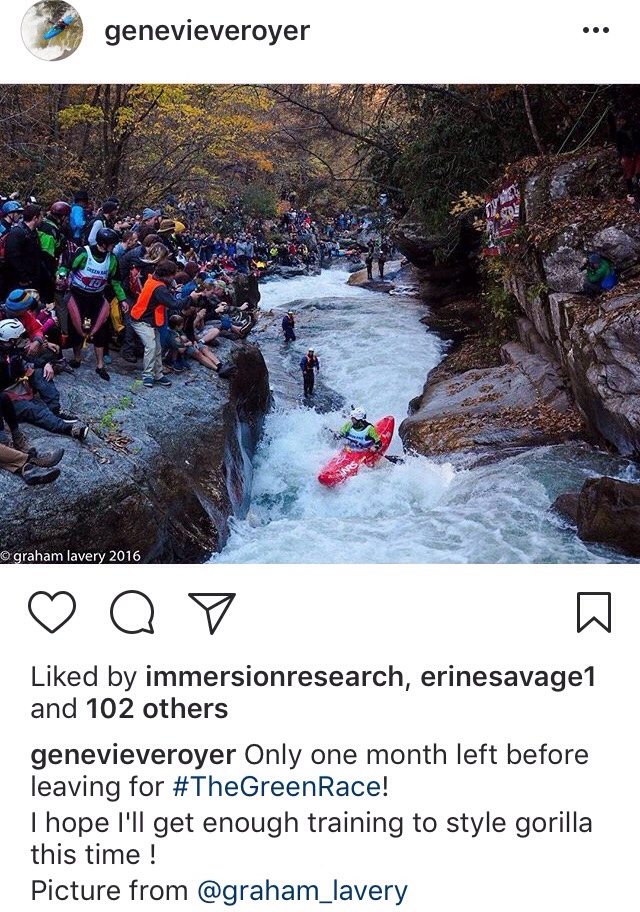 MK: Sounds like an intense race! What concerns you that could cost you time in the race?

GR: Yes, I don’t want to stay a beater ahah, but it is also a really fun race on an amazing river and with an awesome local community of boaters. I am doing sprints or flatwater training when it’s dark in the lachines (in MTL) after work and creeking on the weekends. I will be there 7 days before the race and will spend as much time as I can training on the river and studying lines on videos. I am mainly at the point of trying to get good lines from top to bottom and keeping a good pace (Slow is smooth, smooth is fast). My concern would be not to pin or roll anywhere!

Slow is smooth, smooth is fast

MK: So I was looking a little bit at the Rouge River online and it looks like a pretty good river to learn on, yet also looks like a river that can make for some exciting swim stories. Have any good swims in those early days on the Rouge?

GR: I learned to roll as soon as I could to follow the rafting trips down the Class 3-4 section. I had so many beatdown in the “washing machine”, probably more than everyone else did, while learning – but always fought myself out. Same when I started to run the 7 Sisters a few years ago (the waterfall section), as I was learning how to boof on these drops. I can probably tell you every single thing that can happen at the bottom of these drops, as I experienced it! I surfed them all more than once but only swam, losing my paddle, in the 3rd one at the first Slalom 7 Sisters edition.

MK: Looking back to the QONY races compared to the KONY races, two obvious things stick out to me. One, only 4 maybe 5 women enter the race. Second, only 2 usually compete in all 3 races. As a guy that boats with some pretty bad ass female kayakers, do you have an opinion as to why there seems to be a lack of interest in the QONY races?

GR: Sara Fick did all three races last year too. I don’t know enough about the local community to say anything about it, but there is a difference between running a river and catching eddies and racing it by yourself without stopping and with no safety set up. It can definitely be more intimidating. Also with the long boats the gap between men’s long boat and women’s short boat is huge and some of the girls might feel less competitive because of that. If we compare to the Quebec series, there aren’t more girls competing in the Class V races. Until this year, I was the only girl racing at Neilson race and we were only 3 at Slalom 7 Sisters this year.

MK: What does the future hold for Genevieve? Do you have your eye on any specific event that you haven’t competed in yet? Any rivers that you are planning to check off the endless list of rivers?

GR: I wish to go kayaking in as many different places, discovering amazing rivers and rapids, as I can. I haven’t got the chance to travel outside North America for kayaking yet because of school, but I can’t wait to go explore the world. I’ll probably end up going to Sickline one day, but I will make sure I am strong enough to make the finals if I go, as it is pretty far and expensive. 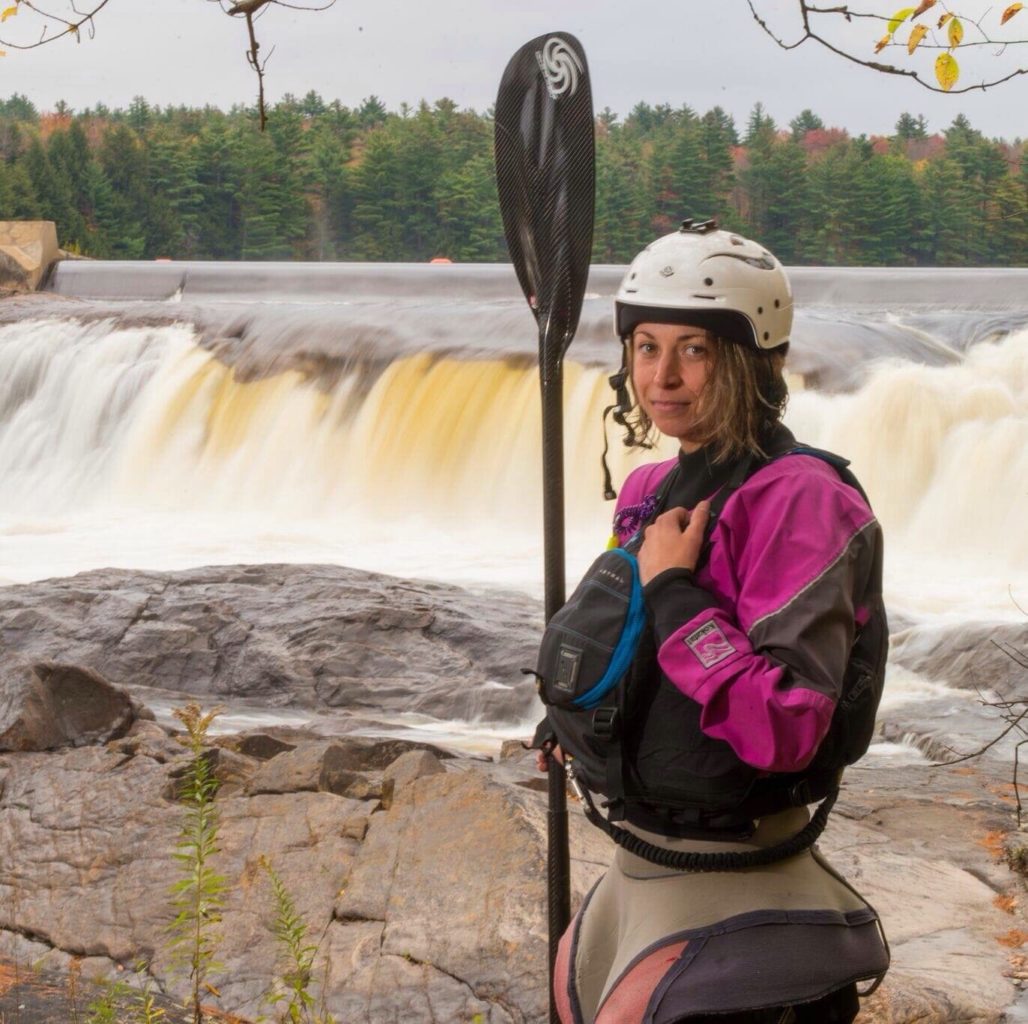 MK: Genevieve, thanks for your time. Do you have any words of inspiration for our many young readers?

EDITOR’S DESK: Jay Carpenter, aka Moonshine Kayaker, is a DBP Admin and Staff Writer hailing from upstate New York. Jay has covered the KONY series for us and also hosted a river cleanup for #ShowUsYourJunk. He creates the entertaining whitewater feed LETS GET WET TOGETHER