Emily Yates was among the first boots we had on the ground at Standing Rock. She was one of the those who loaded up cold water gear and headed east when the call went out. This is her story, 1 year later. This woman epitomizes what we at DBP Active!! are so proud of, she Walks Her Truth, every day. This is her story, in her words. ~Ythsta Resovich, Contributing Editor and Chairperson of DBP ACTIVE!!

Listening to rain fall from the sky and splat onto the street, I realize how much my relationship to water has changed since I made the trip to Standing Rock. I’m more conscious of water in my daily life – its sound, taste, feel – than I was before.

That’s not to say I’ve been drinking enough of it, or managing not to spill it in inconvenient places, but as life-giving elements go, water is on heavy rotation in my mental playlist. Every other train of thought eventually leads to it: cooking dinner? Glad I have clean water. Taking a shower? So lucky to have hot water. Dismantling the military-industrial complex? Hey there, look who’s using all the water! Turns out, it doesn’t take long to make the connection between water and, well, everything that ever is and was on Earth.

Once the connection is made, it’s impossible to ignore. At Oceti Sakowin Camp, I couldn’t walk more than a few steps without reading or hearing “Water Is Life.” Even while sleeping, I couldn’t avoid it. One frozen morning, I woke to a woman’s voice outside the tent, softly calling for the friend huddled next to me in our blanket nest: “Hey,” she was asking, “do you want to go to the water ceremony?” The sun hadn’t risen yet, and though the idea of a water ceremony under gently-falling snow sounded interesting, the idea of a warm blanket nest was deeply compelling. My friend mumbled to the voice outside that she was good, thanks, and I took this as a sign I should pull the blankets tighter around me.

“Are you sure? It’s about to start …” came the response from the other side of the tent flap, and now I was awake, groggily accepting that of course I will get up now. Before the voice walked away, I answered: “I’ll go.”

My friend decided if I’m in, she’s in, so we bundled up in our three pairs of pants plus a long skirt (primarily to show respect to the rules of the camp requiring women to wear skirts, although it turned out they’re also conveniently effective lower-body windbreakers). We hustled up the hill to Flag Road, where the procession to the river had already begun. In the early-morning grey light, my vision was still hazy, and as we approached dozens of people moving slowly down the road, it was hard to tell where one person’s outline ended and the next began. We got closer, and I could see the women in front with the men following. A few women in front carried water in copper urns.

As the group passed in front of me, I joined the women, and although I was doing my best to stay out of the way of the people who know what they’re doing, I soon found myself being handed a copper bowl full of water and gently pushed to the front of the procession with the other volunteers. Okay, Self, you can do this, I thought nervously. Just don’t drop the water. Don’t drop it. And don’t walk too fast. Or too slow. Relax.

In the middle of my internal pep talk, I realized a Native man was approaching me with a bottle of water in his hand, and this is the part where I had no idea what to do next. My inner monologue switched from encouragement mode to shame mode for a few seconds before I wrangled it back to the present, to the man who was beginning to speak to me:

“I am a sun dancer from New Mexico,” he told me. “I bring this water from the Hopi tribe.” And now you’re presenting it to a foggy-brained white girl, I silently finished for him, willing myself to magically transform into someone who was prepared for this momentous occasion. He opened the bottle and poured some water into the copper bowl I was cautiously holding. I looked over my shoulder at the women elders at the front of the procession for some indication of how not to screw this up. The sun dancer motioned for me to rejoin the group, but as I stepped back toward them, he stopped me: “Don’t walk backward!” So close to not screwing it up, I mused.

The group caught up to us and I stepped in, handing off my copper bowl to another woman and taking my place comfortably back in the middle of the procession. The song had changed, and as we reached the banks of the Cannonball River, everyone sang, “Oh, mother, let’s go down, down to the river to pray.” Even non-indigenous songs were welcome – water knows no genre, after all.

The dawn was breaking as the men lined up along the bank of the river and welcomed the women making our way down to the water, offering as much assistance as needed while we navigated the snowy, slippery slope. We offered tobacco and blessings to the frozen river and the elders invited us to share water songs. Everyone sang along.

Suddenly, a piercing sound filled the air: Reveille, the 6:30 a.m. military bugle call. I’ve always found it jarring, even when hearing it every morning in the military, but in this serene setting, in the middle of this ceremony, it felt like an act of aggression. It pulls me back, not only to my military days, but to an automated mindset I wanted to leave behind, one I never expected to find in this place. It reminded me that over the past two days, hundreds of veterans had arrived at Standing Rock, and they may have come with good intentions, but they were also bringing military culture, which has a tendency to dwarf all other culture. They were showing up in uniforms, expecting to go into battle, completely unaware that this was an entirely different kind of encampment. Rather than being changed by this place and the people protecting it, they were trying to change it themselves, into a place more familiar and comfortable to them.

All I could think is that they had missed the Water Protectors’ point by a mile. Our indigenous hosts invited us to the ceremonial Oceti Sakowin Camp to join their already-strong movement – not to stride in like we owned the place. We came to join the water’s flow, not to reroute it. Since the first Europeans’ arrival in this country, the Native people who’ve been left alive here have been subjected to the forced rerouting of their homes, their families, their cultures, their languages — and now they were watching thousands of non-Natives reenact that same upheaval in their sacred camp. It’s no wonder they wore expressions of sad amusement, even as the drilling easement was denied and celebrations began. They knew this was only a small, temporary victory.

Sitting safely back home in my cozy apartment, I watch online as developments unfold at Standing Rock. I watch the exodus of scores of veterans from the ceremonial camps, scattering back out into communities far and wide, the national media following close behind. I watch the authorities move in to clear the camps as soon as the press have gone. I watch Water Protectors being attacked, arrested, imprisoned, charged, and eventually released under the watchful eye of the government. I watch our new president give his unflinching approval for the construction and use of the Dakota Access Pipeline. I watch as oil is pumped through and spilled out of the pipeline. I watch the news cycle shift its focus to the new Starbucks holiday cup controversy. As I watch, my mind returns to the water that still needs protecting. I go to the tap in my kitchen. I fill my cup, and as I do, I hear the Hopi sun dancer’s voice in my head: “Don’t walk backward.”

I hear the Hopi sun dancer’s voice in my head: “Don’t walk backward.”

I take a deep drink and water flows through my body, hydrating my internal tissues, changing me from the inside out. I resolve not to be a bugle call, drowning out the quiet wisdom I learned in my short time at Standing Rock, but to be a song sung in harmony with voices raised in ceremony. Like the water itself, the only direction I can move is forward. 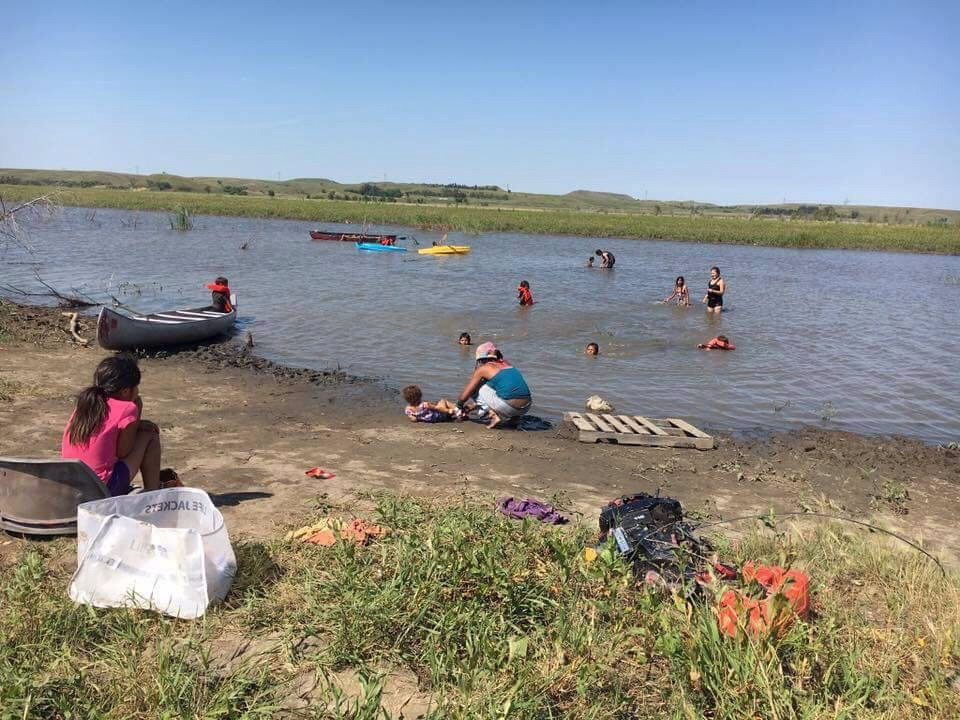