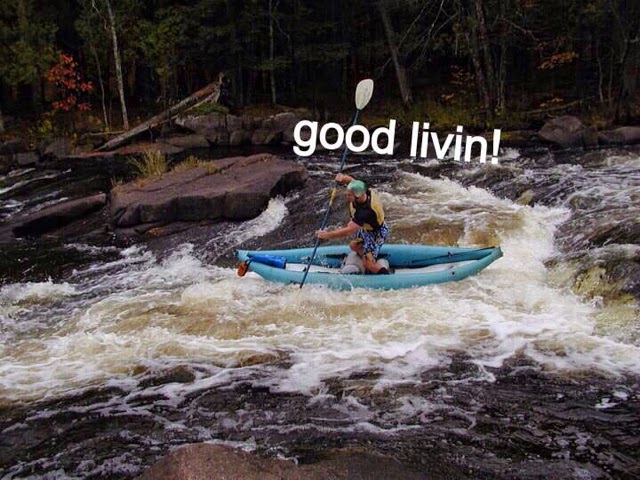 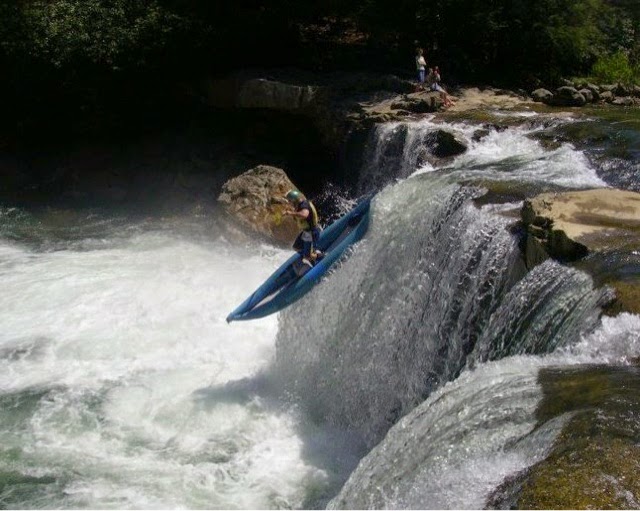 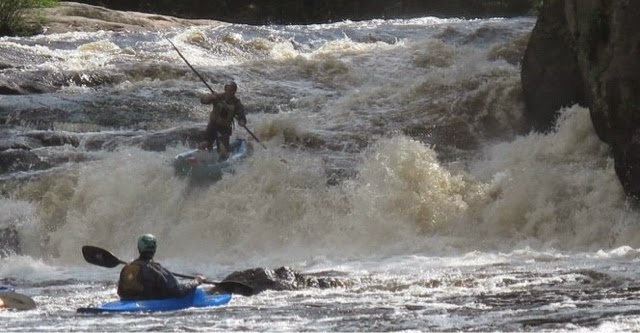 Big Smokey Falls, Wolf River, WI
“Bumps, Bruises, Beat Downs and Wallaces”
After the Wolf trip, a new career had begun. A “what can I stride next” type of mentality took over me… and I got worked, A LOT.  Getting down a Class III was no joke.  The Lower Yough was the next river added to the stride list.   The run started rough when I crash and burned Cucumber Rapid along with another small rapid on the Loop section downstream, but the remaining miles went clean.  Next up was the Ocoee, which was rather disastrous.  I hadn’t even gotten three boat lengths from the put-in ramp and the shit show had already started.  The failures continued as I challenged different rivers.  This was all a new experience for me, in more ways than just one.  While sitting in the inflatable kayak, I never really experienced failure.  Joel and I had our swims and pins, but for the most part, we had very few problems.  Now it was different.   There were problems around each and every bend.   Before, I would begin a river with the goal of trying to have a clean run, now I was approaching each individual rapid with the hopes of having a clean run.  I finally got to experience the frustration and commitment that hardboaters have to go through in perfecting their skills.  But, like all good kayakers, I always went back for more despite the beat downs. 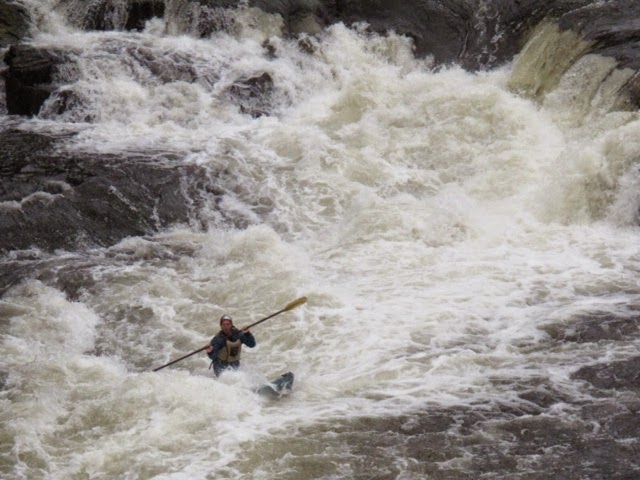 Pier’s Gorge on the Menomonee River, Wisconsin/ Michigan
Over time, I honed in my skills.  Eventually, I learned to catch small eddies, make ferries, and turn my burley boat on a dime.  I learned how to side and front surf, brace off of towering waves, holes, and land large drops much the same as I did back when I would paddle sitting down.   Once I had increased my skills, I ran many of the same classics that I once sat down to paddle back in my early days.  My goal was to stride Jeff Snyder’s hometown run, the class IV-V Upper Yough.  My first shot at it came in 2001 and I pretty much got my ass handed to me that day, mainly at Triple Drop Rapid.   It took me two more attempts until I finally had a relatively clean run. 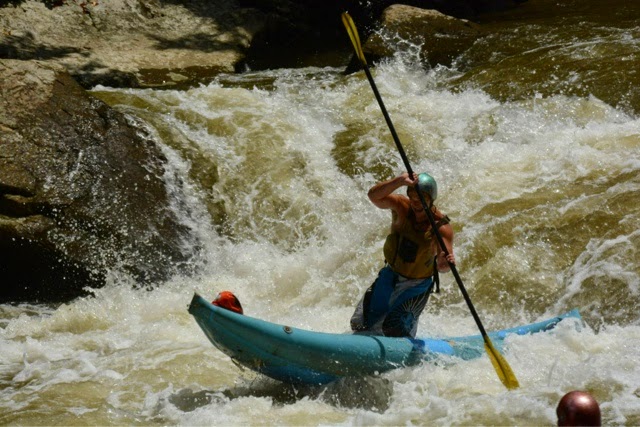 National Falls on the Upper Yough, MD
“Practice and Persistence Pays Off”
As the years moved along, I totally left behind the sitting world of kayaking. I started adding some classics to my river list that I only have seen through the high eyes of a strider such as the Lower Big Sandy, the Rip Gorge of the Penobscot, The Arkansas Numbers, Aspen’s Roaring Fork, and the Russell Fork Gorge.  Though I mainly stick to class III to IV+ water, I have been known to tackle the occasional “old school” class five rapid.  I had my first clean striding run on the Upper Gauley back in 2005 and followed that up with a solo run on the Ripogenus Gorge of the Penobscot River up in Maine.  (I did, however, get munched on my second run through the Cribworks a few years later which resulted in an epic swim so I am 1 for 2 on that rapid.) In 2008, I tackled the dangerous and unforgiving Russell Fork Gorge successfully for the first time. I am probably the only person in boater history who ran this river (and many others) for the first time as a strider.   I have dropped some good size waterfalls over my striding years, and surprisingly have stuck the landings.  Some close to 20 footers… Wonder Falls on the Big Sandy, The Russell Forks El Horrendo, and Baby Falls on the Tellico have made for great photos. 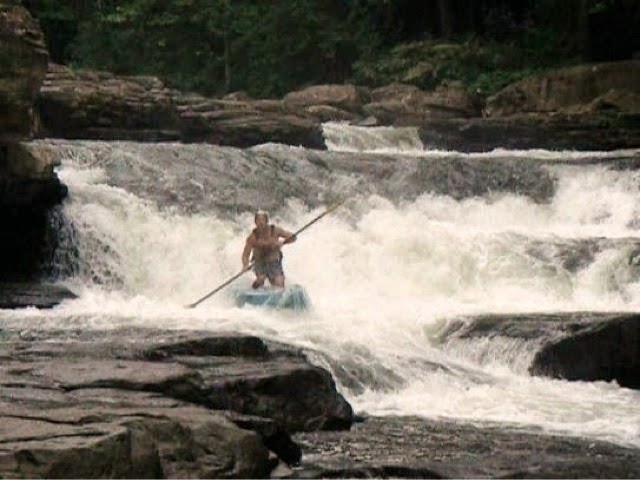 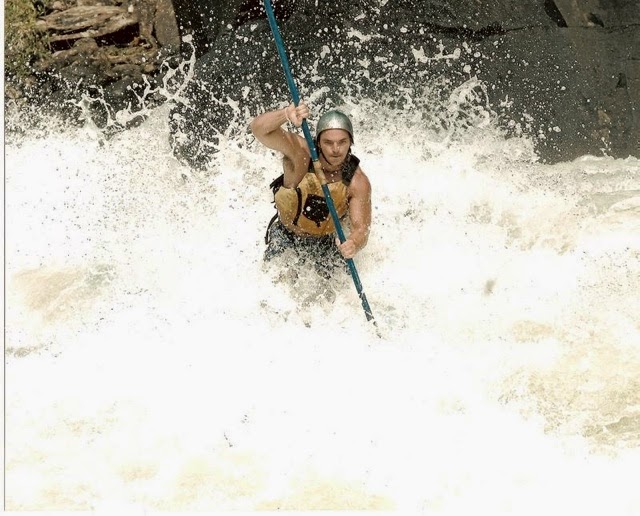 Submerged in the froth of Pillow Rock Rapid, Gauley River, WV
Mostly these days, I stick to my favorite class III and IV runs such as Tennessee’s Tellico and Daddy’s Creek, West Virginia’s Upper Meadow, the Lower Gauley, and I still stay true to the rivers that started this craze up in Wisconsin: such as the Wolf, Peshtigo, and Pier’s Gorge on the Menomonee River.  But my favorite run is the Upper Yough.  To date, I have run this rock infested Maryland classic over fifty times.  The four miles of continuous rapids with countless eddies, boofs, and blind drops has always been a sacred and beautiful whitewater wonderland to me.
Now after fourteen years of striding, I am still one of the few that do it. During this time I also have discovered several advantages while boating standing up.  Being able to exit my boat quickly helps me facilitate quick scouting, rescue, and has saved my ass from a pin situation more than just a few times.  I don’t get splashed as much by the water while striding versus when I would sit in my boat.  This is especially nice on those cold days in cold seasons. I also get a great core and full body workout while striding.   However, the best advantage of striding is the increased visibility. My fellow boater buddies will often elect me to creep up to a horizon line, grab a tiny eddy, and use my height advantage to discover a smooth line to lead the group of lemmings through the turbulence.
Speaking of other boaters, I am asked quite a lot on how I got started in the bizarre world of striding.  I respond by saying that I liked the challenge, and that it looked pretty damn cool watching Jeff Snyder doing it.  It has brought me a lot of attention and, at first, I liked the accolades. Many boaters would drift over to me and say that I was crazy.  I was flattered.  Now that the novelty has worn off, I prefer to paddle when it is just a small group of paddlers, or better yet… simply me solo.  I’m guessing that many people probably see me striding and instantly think that I do it to get that “rush” that daredevils can associate with.  The truth is that it does just the opposite to me.   It relaxes me.   Now, with my confidence and experience, I put on class IV rivers calm and collected.
​     As I have grown older, I have grown to appreciate the entire river experience.   I am not just focused on upcoming rapids. Many of the beauty aspects of river running were never really enjoyed by me when I first started boating.  Back then, I was just focused on not getting juggled in a hole. Now, I take in the scenery, wildlife, and soothing sounds of the rushing waters.  Even though so many things have changed since my first debacle run down the New River, the lure of moving water has remained the same.  I have been blessed to meet so many wonderful people while inhabiting so many gorgeous places, and from the unique perspective of striding.  There will be future changes. Someday, I may not be able to stride the class IV+ runs, but I highly doubt that I will ever give up the river experience entirely.  There are countless class III runs all over the country that can keep me entertained for a lifetime, and I still have several good years in me for tackling the Upper Yough.  Someday, when my knees have been entirely worn down like the brakes on my old Dodge Colt, I may have to give up striding.  At that point, I may go back to sitting in an inflatable, or perhaps I will take on openboating, but as for now, you can guarantee that I will be seen striding softly… and carrying a big stick. 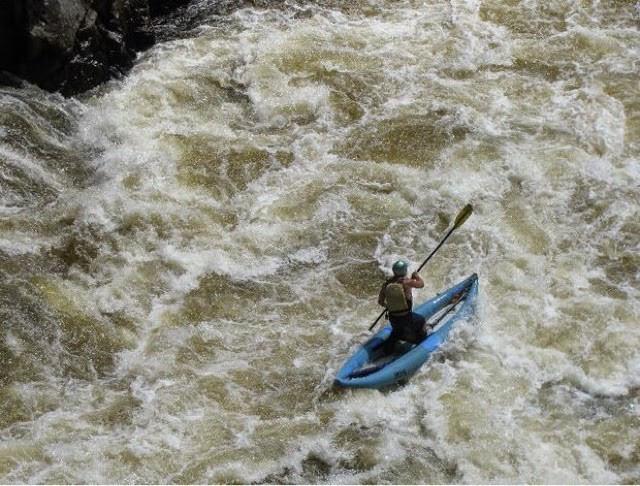 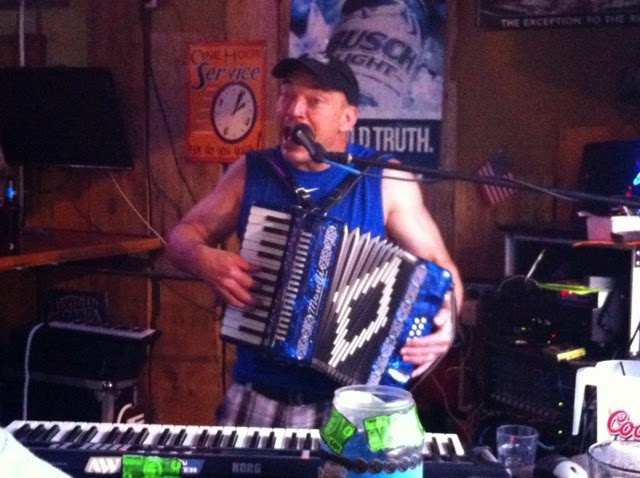 { EDITOR’S NOTE: The original Dirtbags have known Bob for years from his paddling on the Peshtigo and Menominee rivers in Wisconsin, and his epic nights playing Rapid Resort as The Pianoman, or with his brother as The Garbage Men. His antics on stage are as legendary as his paddling, with costumes and classic covers. Our favorite? Wagon Wheel…
He has rocked many a river festival, most notably Gauley Fest, where his penchant for playing well into the wee hours, and the crazy lovable kayaking friends (especially Orange Crush) have made him persona non grata. Well Bob, you’re always welcome to paddle and party with the Dirtbags, bro! }

sweet article!!! could you please tell me the model and length of your IK?!?! I know most striders run the thrillseeker, but that looks more like a sotar. what length?!?! Thanks!!!

Bob, great article. Proud to know you, paddle with you and party with you! Laurie