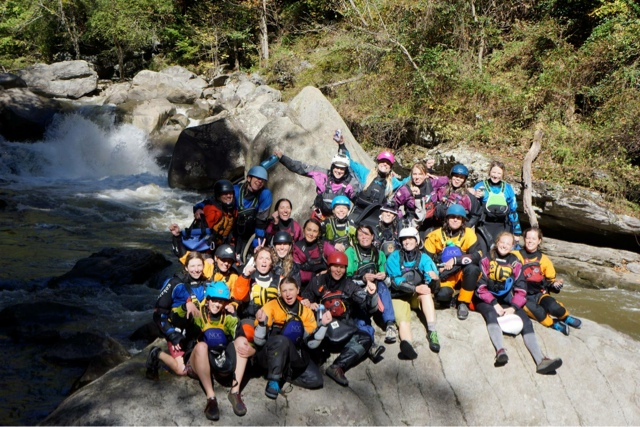 Delving into the depths of the best female Green paddlers in the country is a dive that goes deeper than the river’s shallow surface. With nothing but continual progression up her sleeve, Adriene Levknecht proves year after year and Green Race after Green Race that she is a force to be reckoned with on the paddling front. Stepping up to the plate in what seems to be a man’s game, she has dominated the top time standings on the Green Narrows race course since 2006, when she had her first personal descent of the Narrows section and competed in the Green Race, holding her spot as “Queen of the Green.” It has not been a road paved with ease; rather, starting with determination, given an opportunity, driven towards success, she has a fervent joy for Green River boating. Adriene explains to Dirtbag Paddlers Aaron Erdrich the road that has lead her to the elite community that is the Green Race. 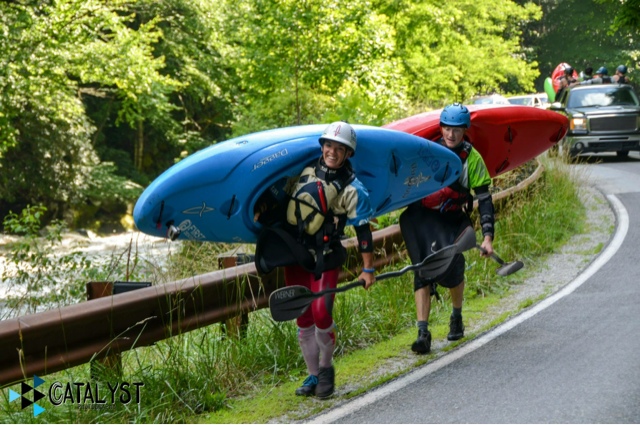 For Adriene, her journey to the elite Green River and many others began early. “When I was a child, 5 years old, my parents bought me an Epi, a kids sea kayak. I learned how to roll when I was 7, taught by my mom. I did primarily sea kayaking when I was a child, but when I got into whitewater I started on the Nantahala and the French Broad, when I was going to the NOC kids paddling school. When I was 11, my dad got me a Wavesport Evo , and when I was 13, that was my first whitewater boat. I then went to World Class Kayak Academy where I solidified my whitewater skills and graduated high school. I had started paddling the Green in the fall of 2006 and that is also the first year I raced. I was pretty loose, to say the least, but I wanted to be out there.” 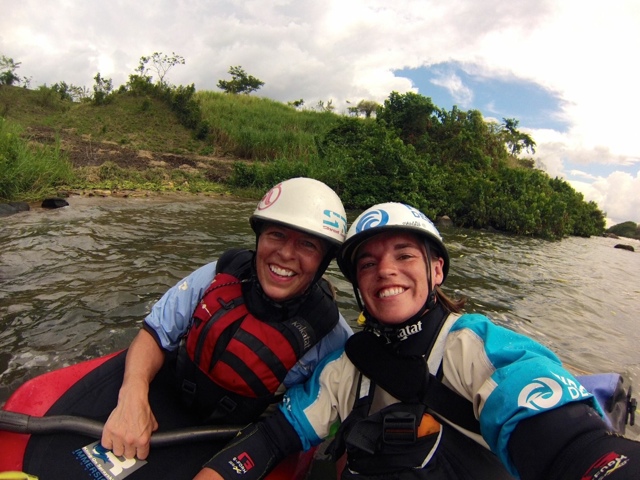 Adriene and her Mom.
Finishing her first race in 2006 at 6 minutes and 38 seconds at 18 years old, she set the stage for the next ten years, progressing not only in time advancement but in development as a paddler, undertaking many other technical whitewater races. As she explains though, those first big runs, as we all know, do not come without a little bit of beatering, “Everyone has those beater stories from their first runs out there. I put a rock through my lip the first time I ran Gorilla. But it took me a couple years to really start going fast and breaking the 5 minute barrier. Long boats helped that too!” 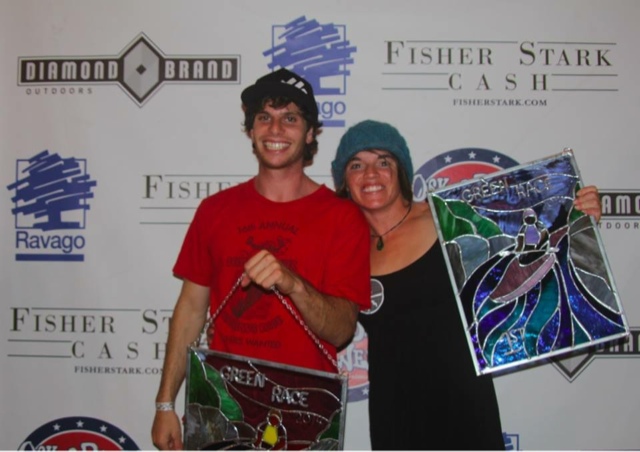 Though now in her own “groove tube,” she is consistently placing well below the 5 minute barrier and continuing to push herself farther every year. Like each paddler has the river of their dreams, the Green Race has special meaning to the heart of Adriene’s boating soul. Summed up in a word- community. The experience of watching these great athletes boating the Green inspires more newcomers to the race; it is the same experiences that have shaped Adriene’s own love for The Green Race. This has kept the same boaters coming back for more each year, month, week and day. 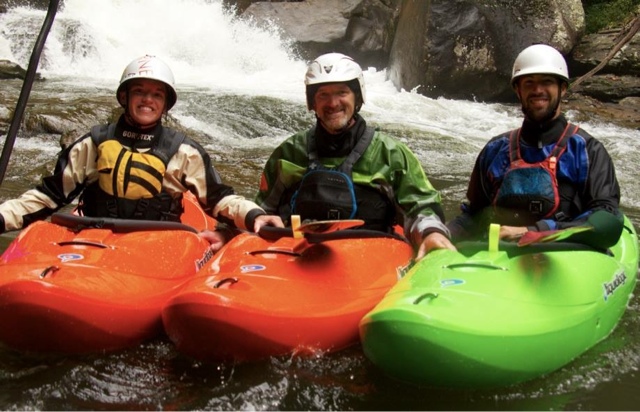 “The Green Race means community to me.” She says. “It means we all get to get together, annually, and go fast down the best river in the southeast. It is energy, it is stamina, it is will power.”
“I don’t really have a workout regiment,” Adriene admits. “I have been spending more time than ever on the water this year and I really feel like that has helped me leaps and bounds. Just like every other year, I want to be as fast as possible while still being in control and smooth. Smooth is fast.” 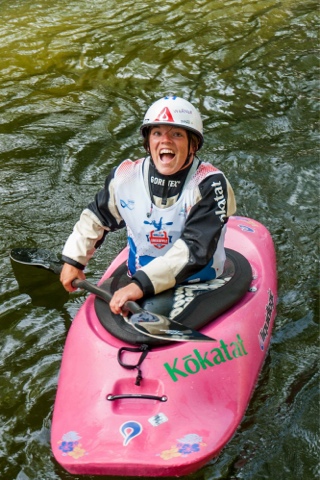 Adriene explains how it feels to compete on race day, “First time racers can expect to be absolutely terrified at the top of the race course. That feeling never goes away. Don’t go out too fast, save some for Gorilla and then after Gorilla charge into the slides like there is no tomorrow.”
“Spectators can expect to have their minds blown.” She continues. “Whitewater kayaking is such an odd sport when you think about it, and when you get 160 racers together, all bombing down some of the biggest rapids in the southeast, there is a lot to look at.
I really like Frankenstein, it is super technical and there is definitely a secret to running it fast and smooth.” 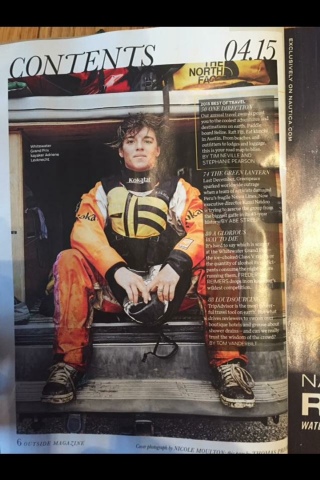 “Coming into Gorilla during the race is one of the coolest feelings I have ever gotten,” Adriene gushes.  “It feels like landing a hovercraft in a football stadium- people hanging off the notch walls and a sea of colors on river left, everyone shoulder to shoulder cheering as loud as they can. It really makes every person who races feel like a superstar.”
Beyond being the headlining lady of the Green Race community, Adriene is also an avid supporter of the First Descents program, leaving us all with the understanding and compassion that paddling and outdoor life is not just for the few but for everyone. Adriene as well as other volunteers of the organization believe in and facilitate the empowerment of other’s first descents after fighting internal battles to maintain their lives.
“First Descents is a non profit organization that helps young adult (18-39 y/o) cancer survivors out live their diagnosis through a free outdoor experience where they learn how to kayak, surf, or rock climb,” Adriene tells. “So we give survivors a week to learn who they really are post diagnosis, and it also gives them a chance to meet people who may have gone through something similar. If you have more questions about First Descents, check out their website at www.firstdescents.org.” 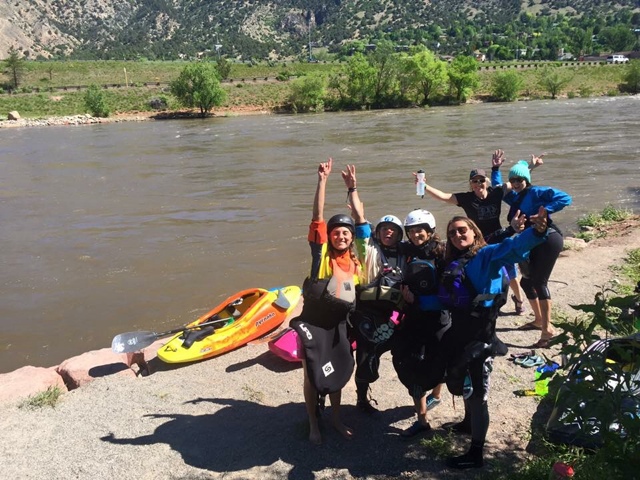 All in all, Adriene Levknecht is not just your average paddler, but an athlete and strong woman that has through blood, sweat and tears continued to progress and become a staple of the most prestigious race river in the Southeast as well as others. The beloved Green Key may open the gate for few but truly it is the key to professional kayaker Adriene’s heart.
Adriene talking about her work with First Descents
Oct 2015’s W*”Why We Love Kayaking”
2014 Green Race Champion!
Adriene shaving her head for First Descents

One reply on “GREEN KEY TO HER HEART: Adriene Levknecht and the Green Race. by AaronErdrich & Sam Benetto”

Congrats to Adriene for winning the race with a record time of 4:38!!! Killin' it, girl! GOOD ON YA!!