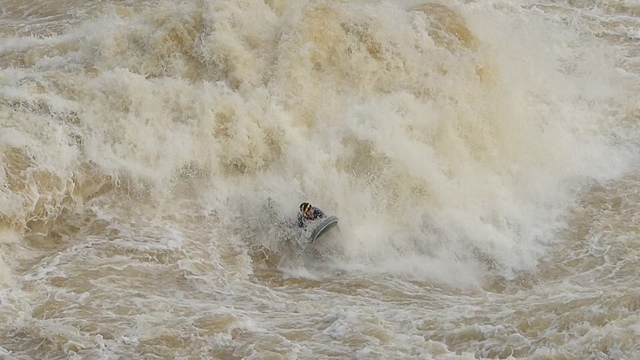 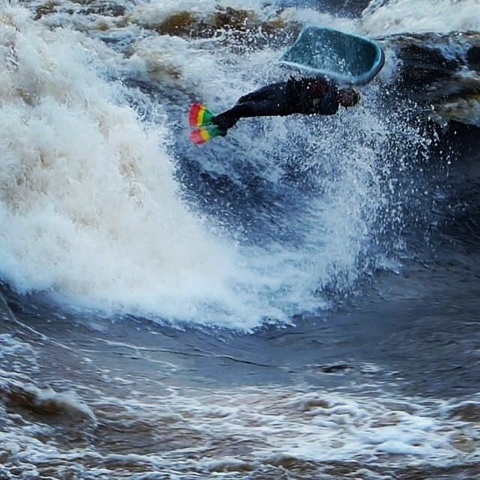 May 2015 on Molly Wave, Mistassibi River 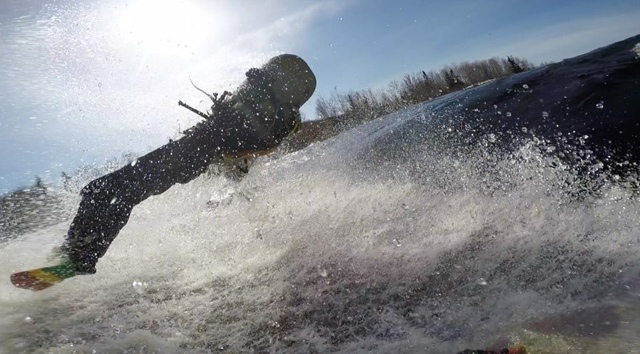 May 2015 H2O Wave Mistassibi
The Board Whip~
Using the board whip handle, rotate the board a full 360 degrees in the air. Now we have been focusing on landing back on our knees so we can immediately omits it the next trick. 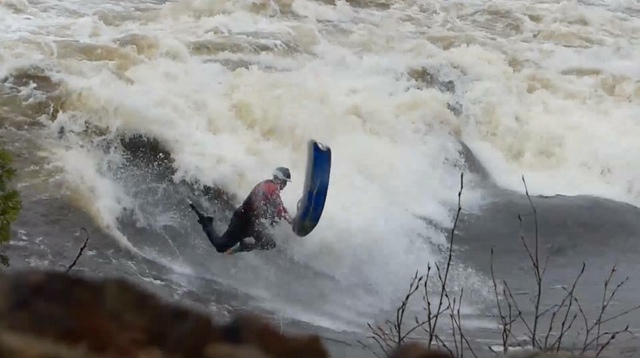 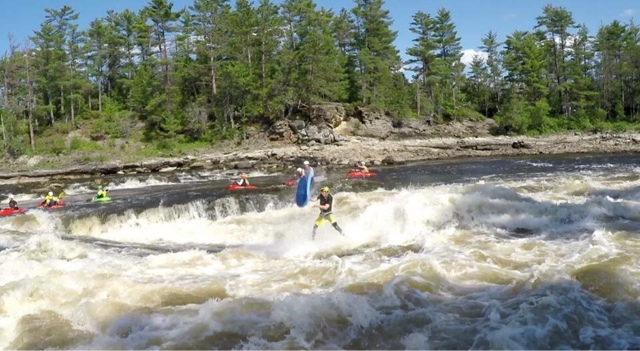 August 2015 Garberator, Ottawa River
Riverboard Pam Am~
Start the trick like an airscrew but tuck and land backwards on the wave. Then initiate the next trick from backwards position, or 180 to front surf again. 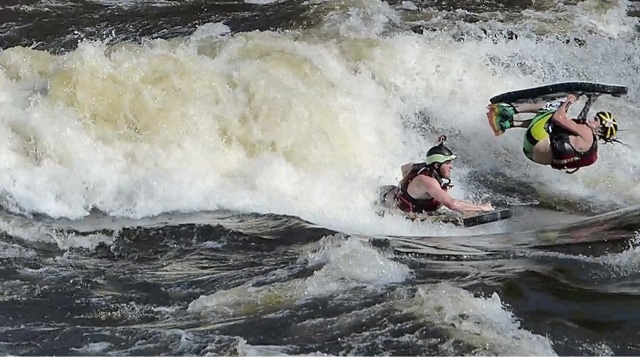 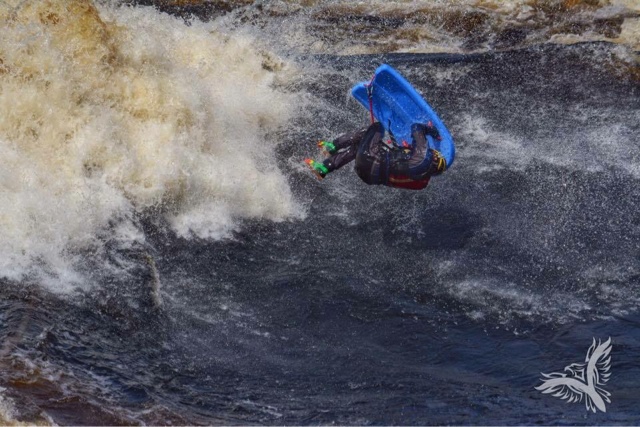 May 2015 Molly, Mistassibi River (photo: Wally Mistassibi)
Flat Spins~
This trick may seem easy but on a riverboard it’s a lot harder than it looks. Usually initiated by dragging one foot and flicking it in the direction you want to spin. Completing a 360-degree spin, without leaving the surface of the water. The flat spin thus far is the start to almost any combo. 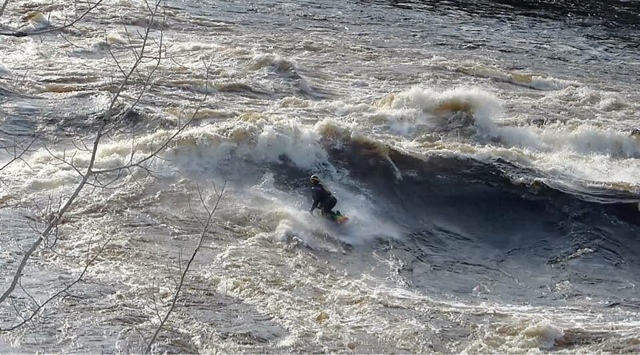 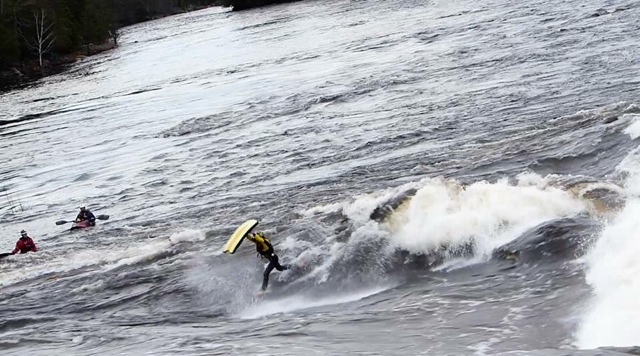 November 2014 Mini Bus, Ottawa River
Sparta~
A lot Like the Walking man but body is horizontal not vertical. Making sure to stab the board deep into the water in front of you, and letting the current bring the board underneath you. Body needs to be fully out of the water. (Warning these tricks are only good for deep waves, otherwise stabbing your board that deep will result in hitting rock.) 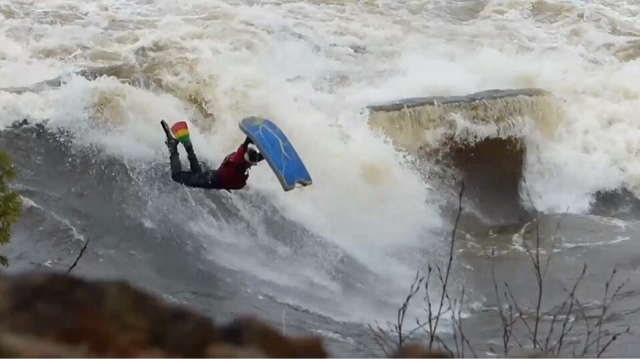 Jon Paterson April 2015 Mini Bus, Ottawa
Riverboard Sasquatch~
Pop and lean back as far as you can keeping your knees on the board. Then the water will catch the back end of the board and your fins, slapping the board back down to the surface. 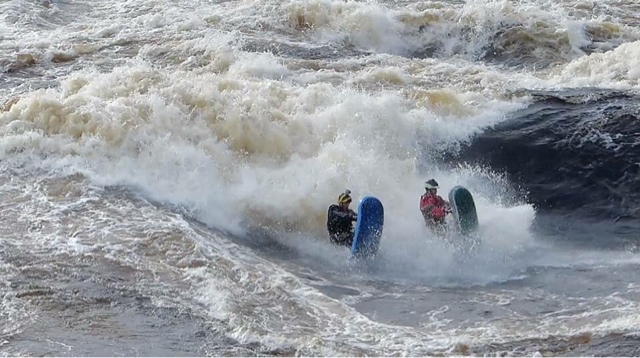 May 2015 Molly Wave, Mistassibi
Body Whip~
Using the board whip handle. Similar to a board whip but YOU rotate, not the board. 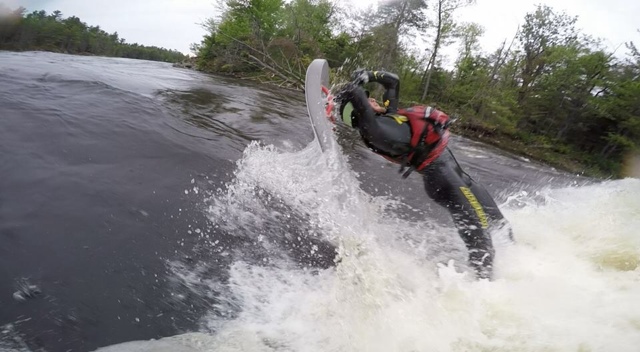 April 2015, Jon Paterson Big Nessy, Ottawa River
Body Varial~
An airscrew without the board. Let go of the board and rotate over it then land back on and keep surfing. 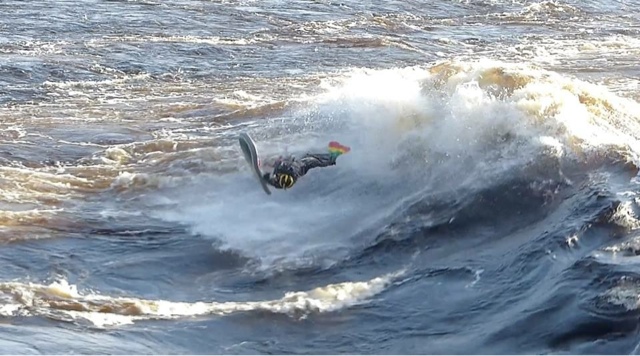 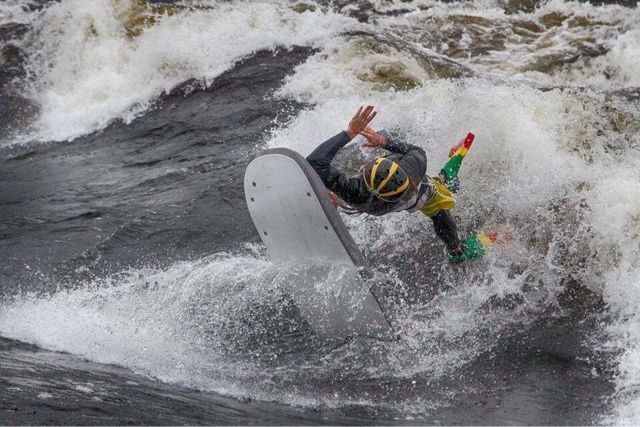 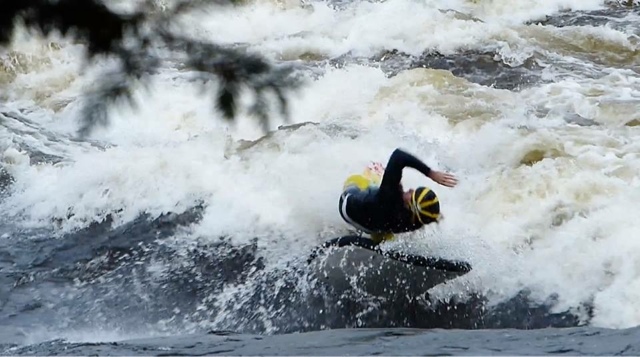 August 2014 Corner Wave, Ottawa
Board Spin~
A board whip but you release yourself from the board (not using board whip handle). Mid air the board does a 360-degree rotation. The board whip handle is kind of like training wheels for this trick because using the board whip handle allows you to stay in contact with the board.
Squirt boarding~
On the Ottawa and other deep rivers in Quebec I often come across deep features that are super fun to intentionally sub out on. Over time I’m figuring out ways to extend my time spent under the water. By locking my board into my hips and plugging the front of the board into the curtain, I use my board as a parachute to grab the downward water and let it push me deep. Once subbed out I keep the board locked into my hips and keep the board as horizontal as possible… the flatter the board is the longer the down time. As soon as I point the board vertical I shoot to the surface. Holes that I used to avoid due to how steep and sticky they are, are now super fun to squirt board in. Plug the nose and hold your breath, then reemerge with intention of getting surfed back in to do it again.
Board Spin 540 and Beyond~
Just recently Jon threw the first Board spin 540, over rotating the board so that he lands with the board facing backwards. Now the board is doing a 540 degree rotation rather then a 360 degree rotation. This trick is only going to get more spins. I cant wait! 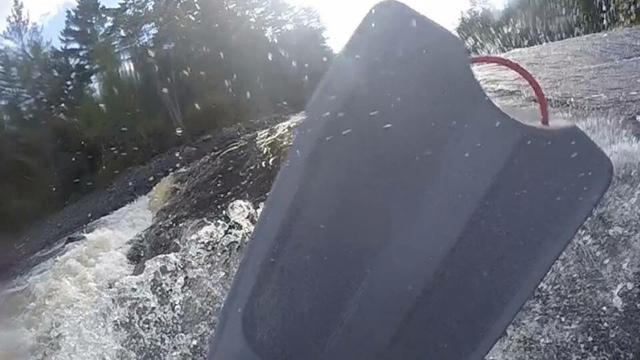 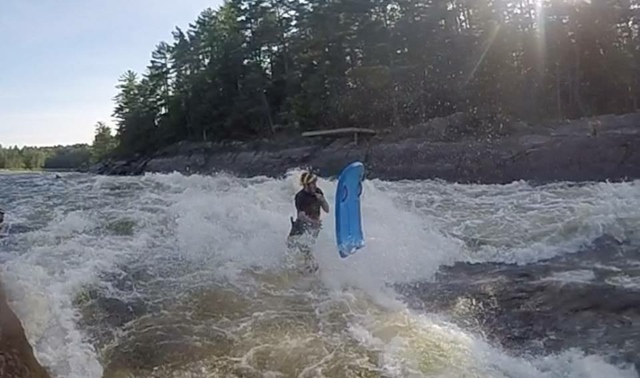 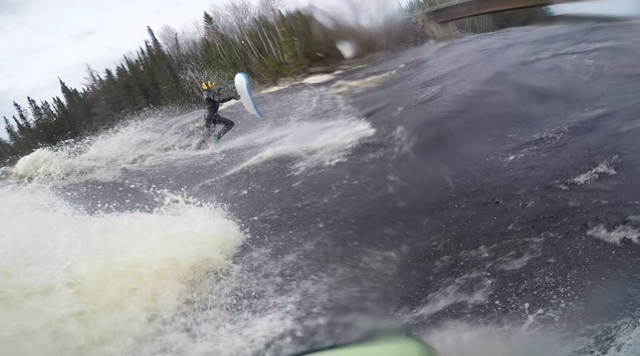 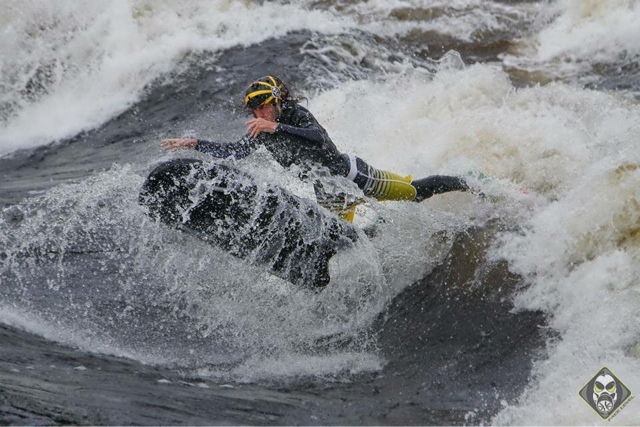 August 2014 Corner Wave, Ottawa (photo: Josh Galt)
Insane Flip~
The board does a backflip above the water but under you / in front of you. 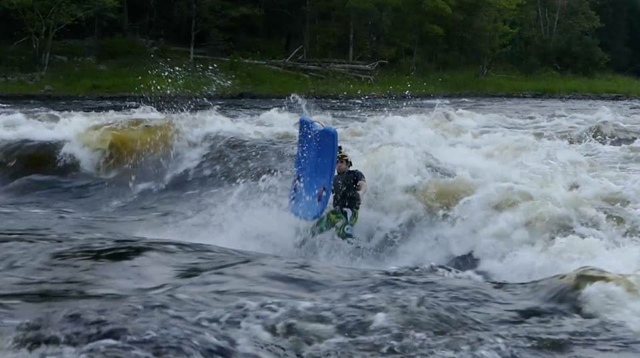 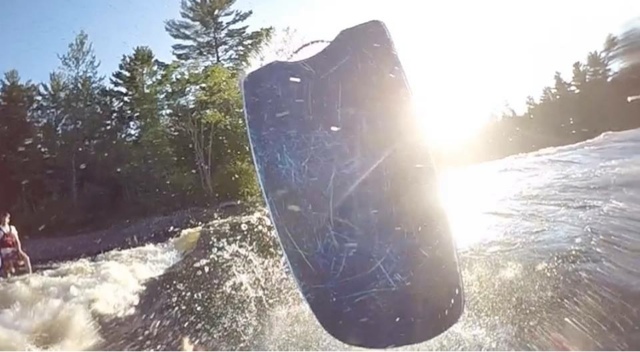 August 2015 Corner Wave, Ottawa
Riverboard Front Flip~
You and the board fully front flip above the water. 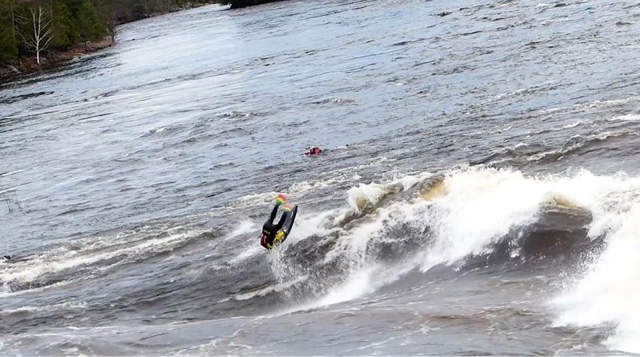 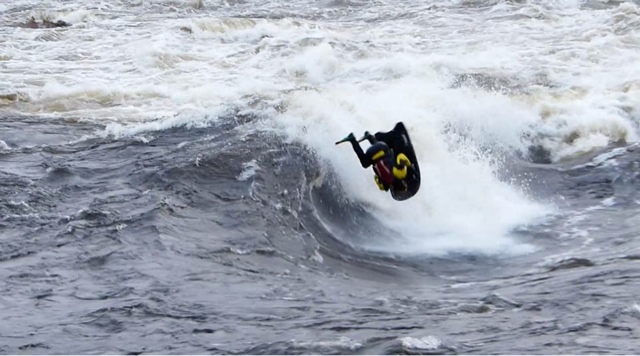 One reply on “GO HUGE, AND SKIP GOING HOME. The incredible life and times ofriverboard pioneer Tom Paterson. Part 2: Breaking Down The Must Moves.by Tom Paterson”

[…] http://facelevel.com/ EDITORS DESK: We featured Tom Paterson in a two part series last year that is must read material for riverboarders looking to learn the next level freestyle moves coming out of Canada. Take a walk on the wild side! https://www.dbpmagazineonline.com/2015/10/19/go-huge-and-skip-going-home-the-incredible-life-and-times-ofriverboard-pioneer-tom-paterson-part-1-the-interview-bychicagotoughill/ https://www.dbpmagazineonline.com/2015/11/09/go-huge-and-skip-going-home-the-incredible-life-and-times-of&#8230; […]