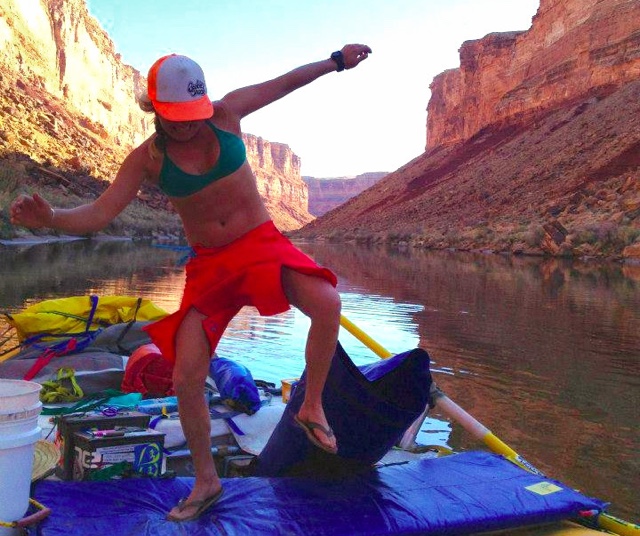 Intoxicating optimism – Kelsey Edens dances atop her gear boat. Maggie Ryan Photo.
Concussion waves shook the earth through the bedrock, sending chaotic surges in every direction. I turned to my best friend Kelsey, and we talked about our options. The right was a shit storm. The middle, a black hole horizon line. The only feasible option was the left, which wouldn’t be easy.
Kelsey and I had scouted many rapids together before—we always had to adopt the same familiar detachment that comes with deliberately putting yourself in harm’s way. Before doing something that stupid, it pays dividends to go numb to the consequences.
I shrugged my shoulders. “Fuck it.” 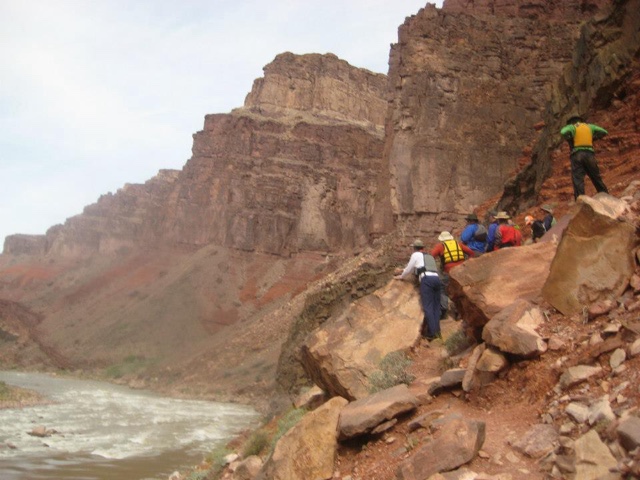 The scout at Hance Rapid. Maggie Ryan Photo.
The elders of the trip, Ol’ Russell and Papa Robards, would lead the charge, dropping in first. My swamper Jeremy and I would take seconds. Rowing away from security, I felt the rush intoxicate me until there was nothing left but the moment, and the oars firmly in my hands.
Russell’s large 18-foot cataraft disappeared over the first drop. Close behind, my heart was humming with adrenal power. Something was wrong – Russel’s boat had not exited the trough at the top of Hance, the trough that Jeremy and I were seconds away from plummeting into. Russell and Robards were being surfed, held in place by the recirculating hydraulic. My swamper and I watched in dismay as we dove straight into their boat.
Slow motion.
I mentally prepared myself for, at best, a very long, very shitty swim – people die in Hance Rapid.
We crashed into the lead boat, a crunch of rubber and metal. Our cataraft, diving straight into the larger 18-foot rig, slid cleanly underneath the bulky craft, helping to lift it out of the recirculating water. In the chaos of those few seconds, I recall seeing half of Russell’s boat sitting on top of me, just barely resting on my lap. And then it was over.
Our collision bumped Russell and Robards out of the hole, and we were pushed left, where we wanted to be. With little fanfare, I pushed through the rest of the waves, and we rode out to safety.
After the feverish flow of molecules had subsided, I stared down at the floor of my boat, and thought of many things.
I thought of the spirits that guide and watch over us. I thought of my friends, both living and gone, and the impact that they’ve had on my life. I thought of these things, and lifting my head to canyon and sky, I whispered a silent prayer.
I rowed up to Kelsey’s boat, and I told her I loved her. Looking up, I could see she too had tears in her eyes.
“I love you too, T-Bird.” Schist and granite rise up to welcome us after Hance Rapids. Mike Robards Photo.
The interior of the Grand Canyon is composed of three metamorphic gorges where the river has literally cut into the mantle of the Earth. The realm of Vishnu Schist and Zoroaster Granite, these gorges are millions, if not billions of years old. The walls in these gorges echo ancient secrets, and many believe that intangible forces, both good and evil, call these places home.
After our close brush with disaster in Hance that morning, we floated into the first granite gorge, where Grapevine Camp lay waiting. 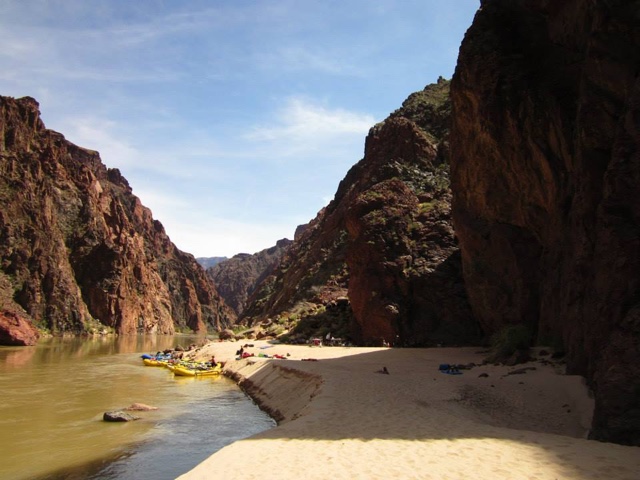 Grapevine – a beautiful camp, unless an animal kicks a rock onto your head. Jeremy Wall Photo.
We arrived at Grapevine about midday. A broad sandy bench with overhanging cliffs composing a sort of roof. It looked inviting.
We set up lunch, ate burritos, and started drinking heavily in the warm afternoon sun. The mood was light and all were primed for a carefree afternoon. Some of us began a game of Bocci ball. Always a shit-talker, we asked Kelsey if she wanted in, but she was content sitting in the shade.
Our game slowly took us to the far side of the beach where we turned around and began tossing back towards where most of our group was busy sipping cervezas.
Mike threw the target ball, then it was my turn. I swung a wide arc and gingerly let the bocci leave my hand. As it released and flew through the air, my eye’s focus shifted as I saw Kelsey stumbling across the beach – blood pouring from the side of her face. Reality spun, and as the ball thudded to rest in the sand, Kelsey collapsed. 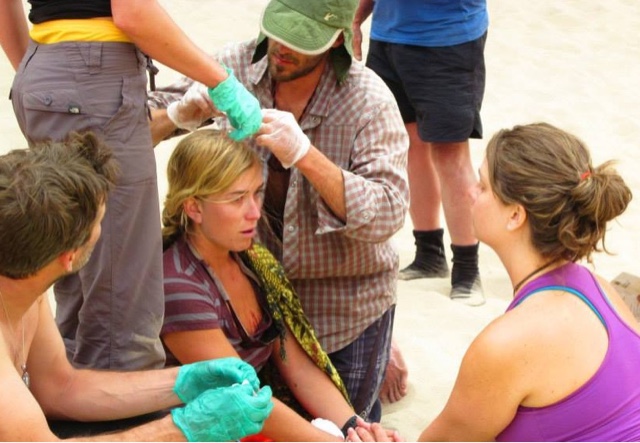 First response – water boiled, razor sanitized, hair cut… Jeremy Wall Photo.
Severely bleeding from the scalp, dazed and disoriented, she was in shock. She didn’t know what had happened.
I heard something to our right, and turning, I watched a rock bounce its way down, spinning from cliff to cliff, funneled by the two rock faces. The stone landed with nauseating speed just feet from where Kelsey had been sitting. I looked to the top of the two cliffs.
A large mountain sheep, keeping sentry over the camp below, stared down at me with menace. It had loosed the volley of rock that would ultimately end Kelsey’s trip. “Fuck you, sheep!” I screamed as half our camp raised their own expletives in uproar.
As the situation unfolded, my sanity began to slip. The severe irony of the situation hit me. In the entire enormity of rock, earth and water that is the Grand Canyon, Kelsey’s fate was now wholly dictated by a stone no bigger than an inch or two across, and centimeters thick.
Kelsey was speaking, answering questions, laughing at jokes; she did not seem concussed. We began to clean the wound.
Acting fast, our crew earned top honors for their skill and professionalism. Water was put to boil, razors were sterilized, and we immediately cut away the hair that was on or near the laceration.
The group turned to palaver.
The silver lining, if any, was that we were but seven miles above the only evacuation point of the entire 270+ mile stretch. Phantom Ranch, well renowned as the only Forest Service post at the bottom of the Canyon, was our best, and only option.
With the daylight quickly waning, we decided that two of our boats would take Kelsey to Phantom that evening.
Jeremy and I would run safety in our boat while Russell and Liz (our EMT) would float Kelsey down. While not death defying, the run in between Grapevine and Phantom has several big drops, most notably Grapevine Rapid and 83 Mile.
Pressing the sterile rag to Kelsey’s head, it was difficult to discern the difference between the water from the cloth and the tears that were pouring down her face. As I broke the news that we’d be getting her out of the canyon, the tears fell harder, contrasting the blood-hued drops dripping from her scalp. 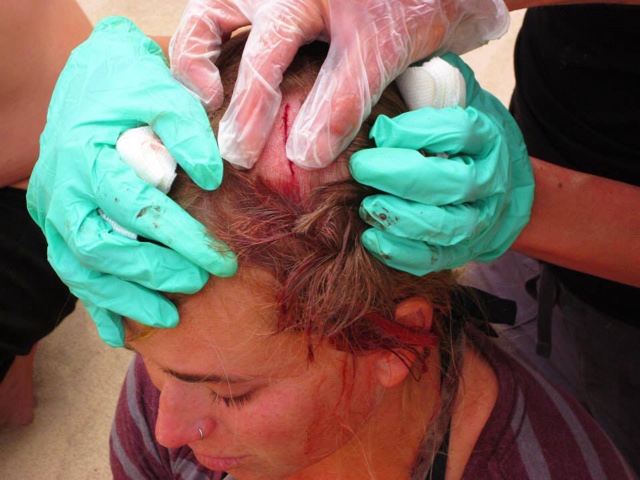 Two inches long and a centimeter deep, the laceration was bad, but the possibility for concussion was also a huge factor in our decision-making. Jeremy Wall Photo.
Cleaned and taped shut, Kelsey was ready for travel, but internally, she was still a mess. In 15 minutes, we rigged the boats and pushed away from Grapevine in defeat.
For the past nine days, the people on this trip had learned to love Kelsey as I did. Now, drifting away slowly, the faces of those new friends faded away like smoke into memory. We turned from the horrors of that place – the illusions of peace and tranquility, and the demons that presided over the steep towering walls, and we turned forward, drifting in the current on a path that was itself still riddled with its own dangers.
Jeremy and I were not only worried about Kelsey’s safety, but also our own. “Here comes a big drop!” Jeremy yelled over his shoulder as we approached 83 Mile rapid, “You better not fuck this up, ‘cuz no one’s running our safety!”
I shrugged, gave him a sadistic smile, and pushed my oars through the rushing water. 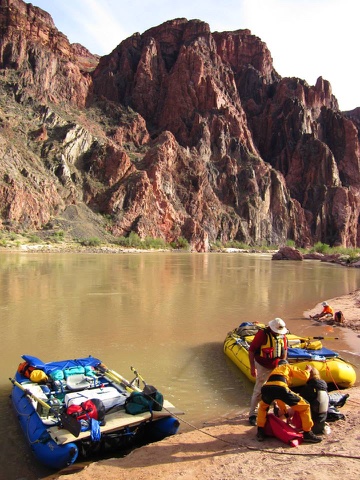 Liz and Russell attend to Kelsey at Phantom Ranch. Jeremy Wall Photo.
As we rowed up to Phantom Ranch, I felt the press of time snapping at my heels. Once we hit the beach, I started running.
Minutes later, I stumbled through the threshold of the medic station to find a bored ranger named Della. In between heaving breaths, I somehow conveyed our situation.
No longer bored, Della followed me out of the sweaty building. When we came across Kelsey, she was stumbling towards the medic station with a cigarette hanging from her bottom lip.
“Ugghh,” Della recoiled as Liz removed the wrap from Kelsey’s head, “That’s nasty!”
Things happened very fast. We dragged Kelsey to the medic post, where Della cleaned the laceration. Minutes later, she popped her head through the screen door with abrupt news.
“You guys have five minutes to get her to the helipad.”
Having to recalibrate the reality of this trip, one in which Kelsey did not exist in it, was like suffering a small death. 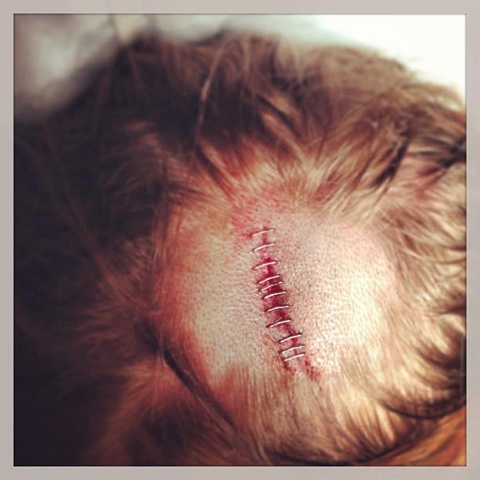 Five minutes later, under blades that tore the sky and winds that ripped our thoughts, Kelsey and I stood in shock. We were both speechless. It was a moment that seemed to warrant a healthy dose of sadness, but by that point, we were both numb. Strangely, the numbness was a different type than that which we’d shared during the morning while scouting Hance.
The detachment we’d felt that morning was a willful departure from an impending potentiality. The numbness that gripped us there, under the hurricane of the rotors, was one attained by the slow accumulation of the unexpected; a slow moving shit-storm that left us decimated, tired and empty.
Hunching over, I kissed her on the cheek, and said goodbye.
She got on the chopper, and for the second time that day, I gazed up to canyon and sky.
Watching the helicopter slowly vanish over the rim of the Grand Canyon, I felt the weight of the day slowly begin to crush me.
Where my best friend had just stood, there was nothing.
At the time, that’s what I felt.
Nothing.
EDITOR’S NOTE: Sam’s article on this Grand Wallace first ran Dec 27, 2014 on the excellent site Teton Gravity Research. Check it out, it’s super entertaining and we give it two Dirtbag thumbs up!
tetongravity.com
FOR PERSPECTIVE, A VIDEO OF A HANCE WALLACE

2 replies on “BETWEEN TWO WALLS ~ THE STORY OF A GRAND CANYON EVACUATION. by Sam Morse”

Regarding the video of being ejected in Hance: If the guy yelling commands in front of the boat was the guide, what the heck was he doing there instead of rowing? If he was a passenger and in my boat, I would summarily dismiss his ass from my boat.

EDITOR'S DESK: I agree wholeheartedly! I wondered if anyone would pick up on that… My command to the perp would have been simple. "WALLACE!"