Tim Marozick did a solo IK (inflatable kayak) trip last year through the Grand Canyon of the Colorado River. We are pleased to deliver Tim’s experience here in a two part series via one day increments. This month we serve up Days 5 and 6, and the ending of the Grand Adventure. Part One appeared last month. 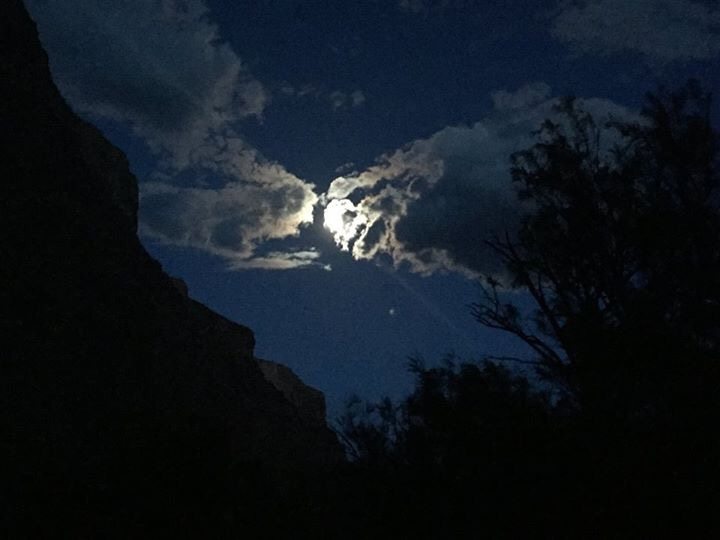 Day 5 of my solo kayak trip down the Grand Canyon:

The fifth day, I got up and took a leisurely morning, enjoying the last of this lovely area and the friendly Nankoweap rapid. A short time later I rounded a bend and came in view of “The Watchtower”, up on the canyon rim in the distance.
Simultaneously, the wind that I had failed to read about arrived with an attitude and tormented everyone on the river. It lasted all day. At some points I would easily blow upstream had I not paddled to shore and just roped my boat along.

I didn’t even think about running Kwagunt, since I could not count on a gust of wind not blowing me off course, or worse. I was feeling no further need to experience what would happen if things went wrong, and was perfectly happy to be able to problem-solve this without running it.

While I was roping through the upper part of the rapid, I met my first hikers in the canyon. I was somewhat shocked to be reminded that people could actually hike down to this part of the river. They were very helpful expediting the process of getting the boat through the big rocks at the top. They said they were hoping I could ferry them across when we got to the Little Colorado River, although it would take them quite a while to get to that point. Turns out, with the wind slowing my progress, they only arrived at the LCR about a half an hour after I did. They had found a ride with the Arizona Raft Adventures (AZRA) group. We all played together in the friendly rapids of the LCR.

While I was exploring the area, I laid out more of my still-wet stuff in a wind sheltered area, and put out my solar charger. When I returned, someone, I assume the ravens, had meticulously gone through my stuff and left me with a game of hide and seek, recovering all the pieces. A toothbrush moved from my toilet kit to my medicine bag; a razor moved to my stuff sack; my signal mirror was in the water. I’m pretty sure I found everything, except the Cliff bar I had started to eat, and left out.

The AZRA folks invited me to camp with them at Crash Canyon. The mile paddle downstream took the better part of two hours, bucking that malicious wind.

The wind did not let up and I spent a miserable night at the exposed camp, breathing dirt and wiping powdered river dust out of my eyes. I was impressed at the ability of my MSR Dragonfly stove to still function in the maelstrom.There was really no place to shelter, with the wind blowing right off the water to make its way up Crash Canyon. 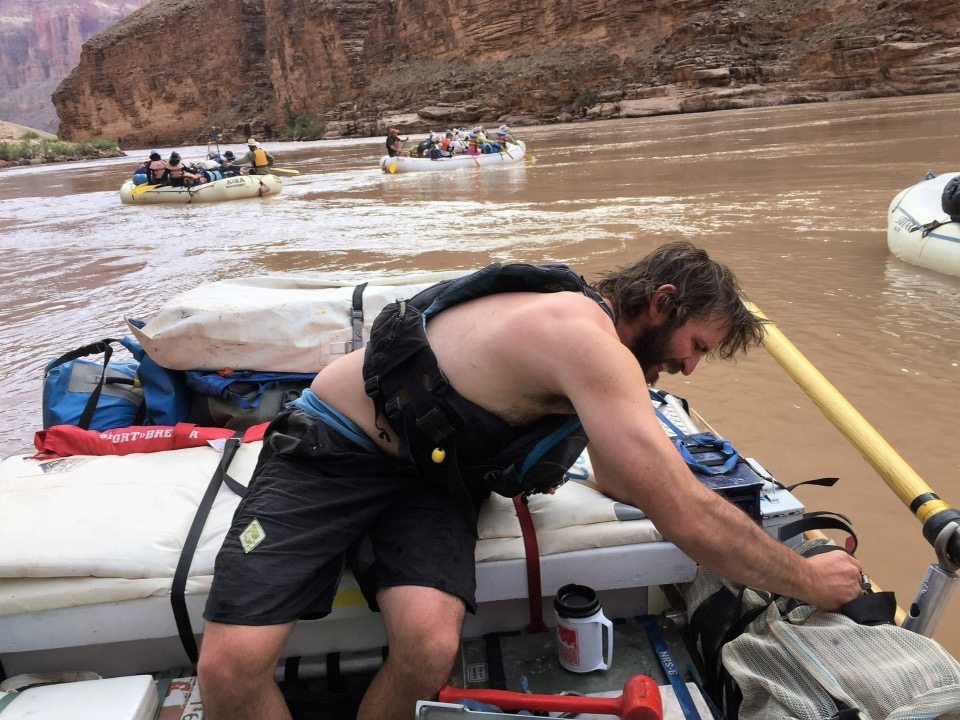 Got up with powdered river dust in my eyes, my teeth, my sleeping bag, my boat. The stuff probably even got inside my dry bag, that’s how fine it was. The AZRA group was extremely helpful and concerned about my prospects of survival. We discussed my options and they suggested I hike out at Tanner Trail, to avoid dealing with Hance and Grapevine rapids. They offered to carry my boat and gear to the bottom of the canyon and I could pick it up in Flagstaff in a couple weeks. 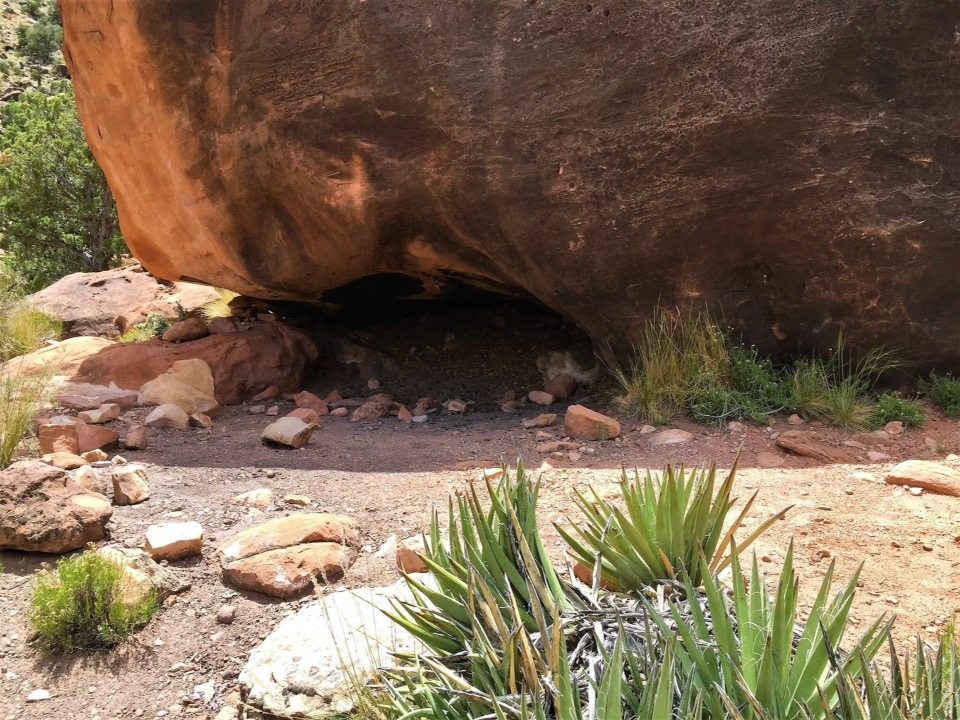 Hats off to Kristin Baunsgard and the other crew whose names I should have remembered for going out of their way to bail me out of a spot I got myself into. They had no obligation to problem solve for me, but rather than suggest that I had made some bad judgment calls by jumping into this endeavor with the wrong equipment, they gave me kudos for trying and for my spirit of adventure. They would not even accept payment or gear in compensation. (I mean, how could anyone turn down that intrepid watercraft?)

I divested my food and fuel to them. They had no use for it, of course, but at least my energy bars and trail mix came in handy for the guides to snack on. I shoved everything into a few bags and marked them with my name and contact info. I rode with them to the Tanner trailhead and we said our goodbyes.

With the balancing concerns of making speed to higher, cooler elevations, and staying warm enough when I got there, I only carried 3 liters of water, a fleece jacket and shell, and made quick time from my 9:15 start. I had a 5000 foot climb and 10 miles ahead. 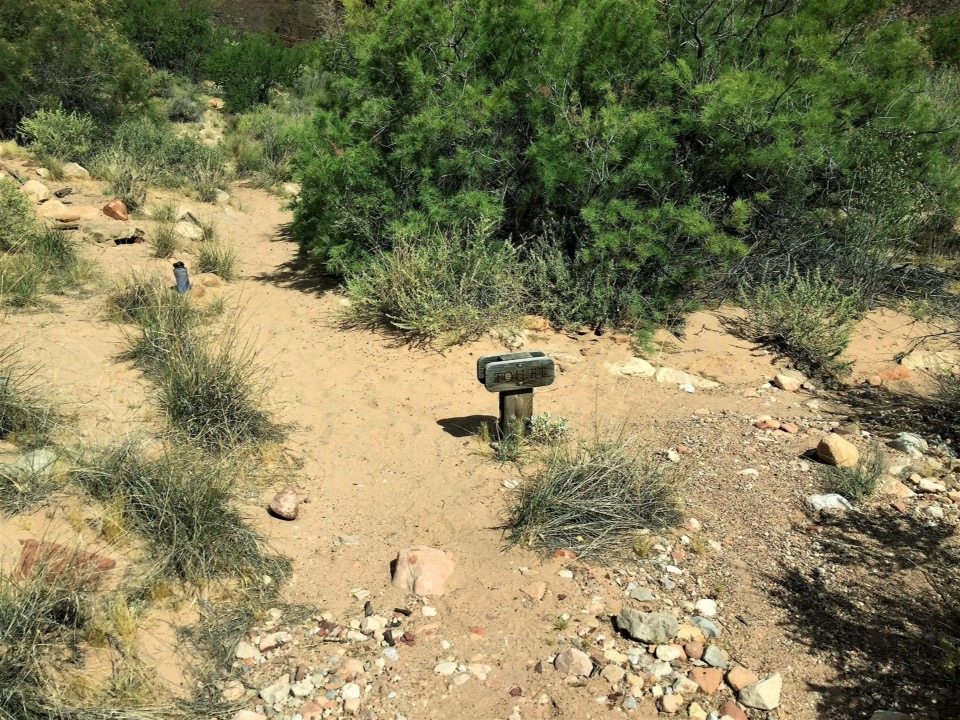 With only one exception, the trail was very easy to follow and I made it to the top in under six hours. Near the top I encountered several water jugs stashed. That would have been reassuring, had they been lower down where it was likely to be hot. I think they were for the volunteer trail crews that I encountered in the last thousand vertical feet below the top. In any case, I survived on the 3 liters I brought.

The issue at the top was now staying warm, not running out of water. 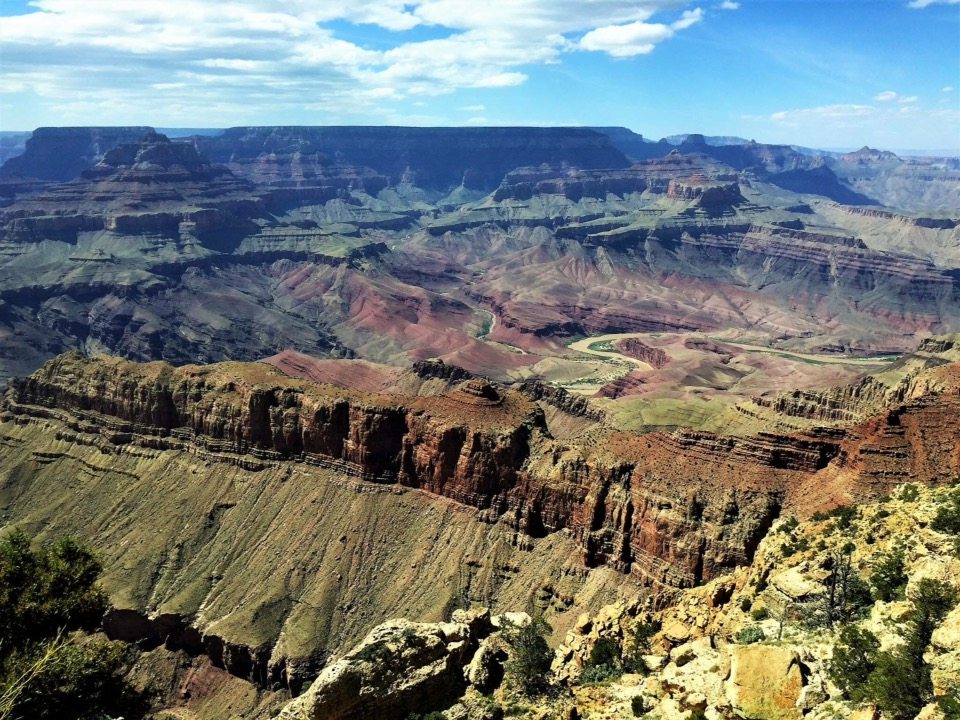 Having made it to civilization, I found myself in the surreal environment of hundreds of foreign tourists who had awakened that morning in their cozy lodges and hotels. To them I must’ve appeared as some wild homeless creature and my first hour attempting to hitchhike to Flagstaff was totally fruitless. I finally resorted to personally approaching people and asking for a ride to Flag. I found someone who spoke English, and a bridge was made when she discovered that this bearded, filthy creature was a physical therapist, like her sister riding along in the car.

Saturday night in Flagstaff was extremely busy and I had no camping gear with me so I had to find a room. Both times I passed through Flagstaff this year in May, it dropped a few snowflakes on me. Both hostels were full, and the cheapest motel was $150. Fortunately, I met up with a couple of motorcycle tourists who were in the same predicament. We agreed to split the cost of a nasty “suite” with bed bugs.

I had carried my 2 PFDs out with me to return to Brady (Moenkopi Riverworks). I called him for his address, and he came to the hotel to pick me and his gear up and give me a ride partway down the road to Lee’s Ferry. I can’t say enough good things about that guy! 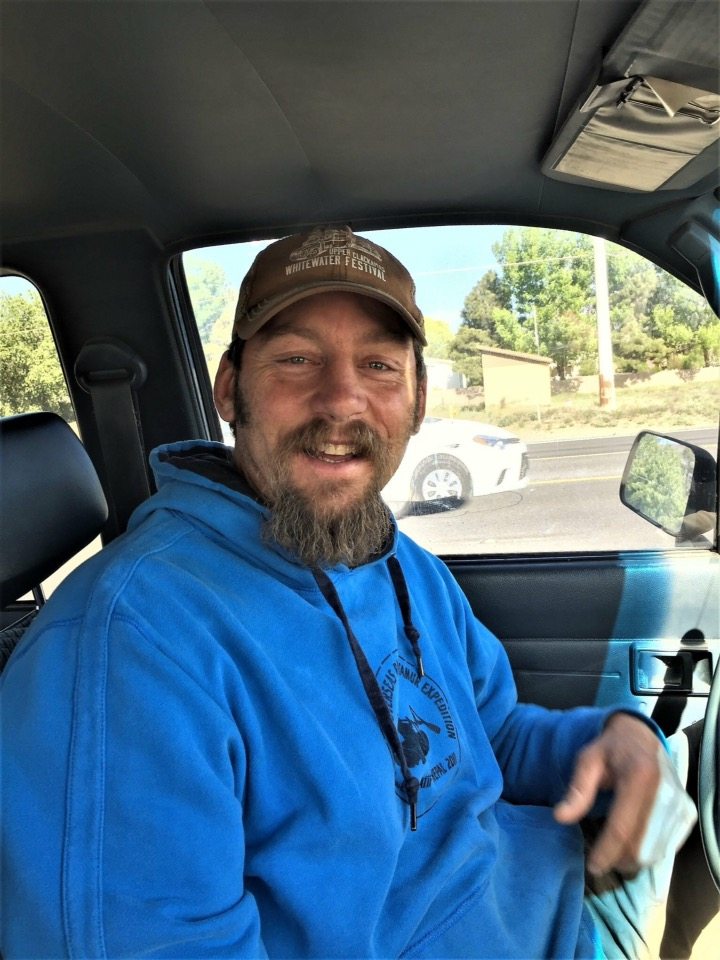 It took me several hours to hitch to Lee’s Ferry. I was lucky to get rides with a couple of local Navajo guys. I’m always charmed with the spirit and good nature of these gentle people, and often dismayed at the poverty they struggle with. As I drove east to meet friends in New Mexico that evening, I got to reciprocate a little, rendering first aid to a car full of Navajo women and children who had run off the road and crashed when the driver dozed off.

I spend a week in Albuquerque, playing nanny to a friend’s kids while she attended a convention. I survived a Trump rally, which was probably more dangerous than anything I experienced in the Canyon, and I got a rare private tour of the amazing Virgin Galactic Spaceport with another friend who works there. 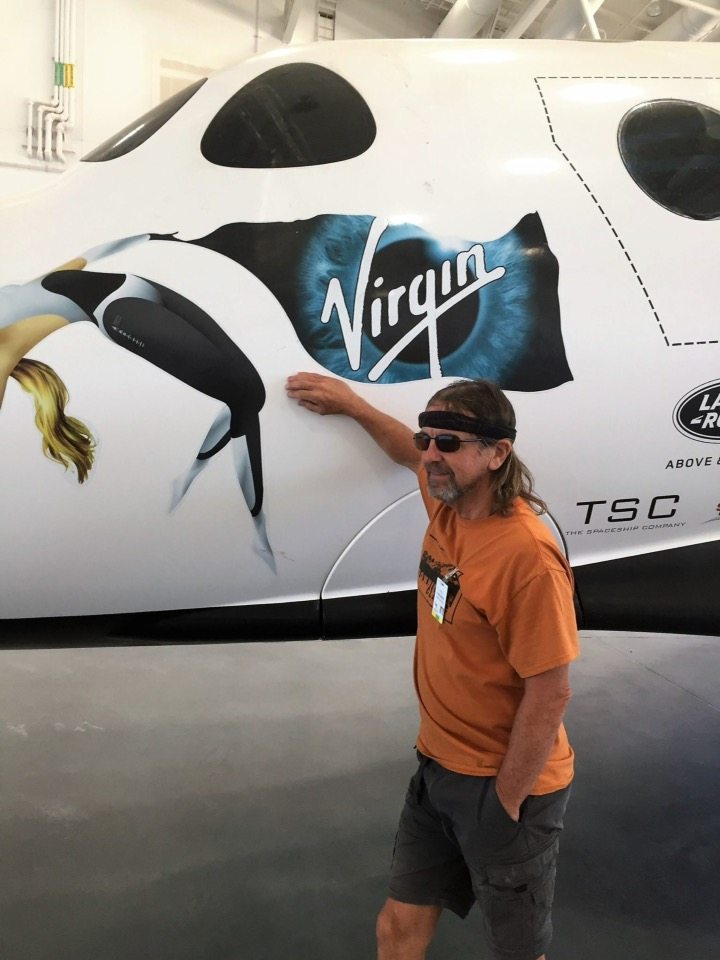 I drove back to Flagstaff and spent a few days camping. I climbed up Humphreys Peak to kill time, then got a text that Kristin and the crew were back. It was great to see them and catch up. Someone had swam at Lava and they were sharing the trip’s tales. I tried to at least buy them all a round at a brew pub that night but it was like herding cats and eventually passed this old fart’s bed time. If any of you (AZRA crew) are reading this, THANKS again. You are all welcome at my home or camp anytime! For that matter, so is any other outdoors person. (Even Steve Wiley and Benjamin Bressler.) 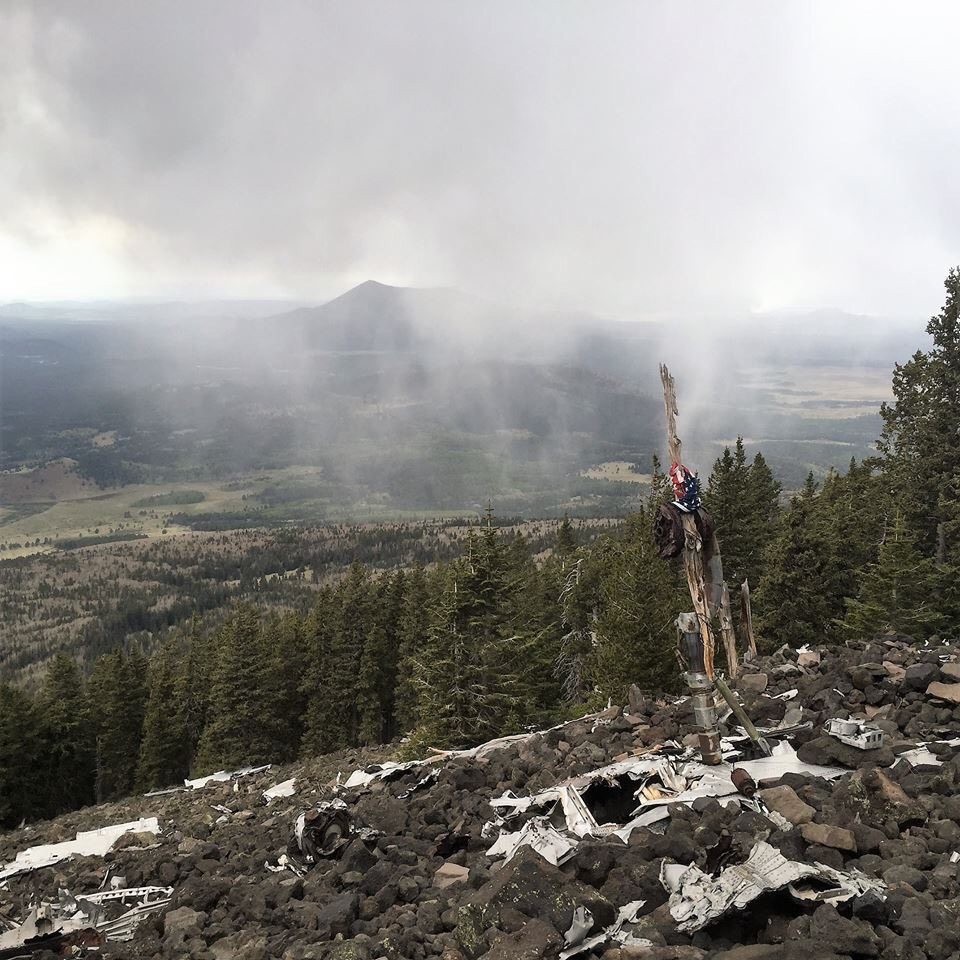